Hey everyone, ranked warzone will be coming in patch 1.2 (scheduled for March) so for many of you this might be a busy time to grind valor/commendations/battlemaster gear. Here is a list of compiled information on Warzone /PVP information that I think many of you will find handy. Most of the information is not from me but rather from other members of the SWTOR community and credits will be given where needed.

Feb 22 update: made some corrections to the Ilum buff system, added a note to the total expertise levels for battlemaster gear, and added the valor info for rank 72 (thanks Titheon)

Souce: Formula from this thread on sithwarrior.com

To see the diminishing returns, this graph will help you with that! 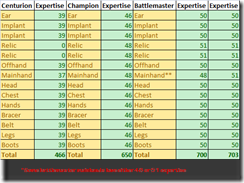 *Some battlemaster mainhands have either 48 or 51 expertise see this link for a 48 expertise one: http://i.imgur.com/xbCOn.png

Amount of valor for next level

Source: Valor per rank information is obtained from Bubble_boy on SWTOR forums

Estimated number of hrs: Calculated assuming 15 minutes per match – numbers are rounded up. 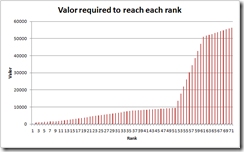 Valor Titles: Every 10 ranks in valor will give you a new title –

Resolve is the circular bar to the left of your character’s portrait.

It fills to full at 800 but does not provide CC immunity until it reaches 1000 (bar turns white).

Resolve drains at a certain rate

Valor gain in Warzones is affected by

[…] Hope you find it useful as well This is a short TLR version of the guide I made here: Useful Warzone/PvP Info & StatisticsDulfy Expertise and PvP Bonus Source: sithwarrior.com formula Expertise granted Pvp Bonus caps out […]

[…] guides. I highly reccomend this for deep comprhension of the classes in swtor with theorycrafting. http://dulfy.net/2012/02/20/useful-warzonepvp-info-statistics-3/ – good guide about warzones and […]

sure, I can do that later today 🙂

Could you explain what “defender” points are and how they’re acquired?

can the Warzone Medals be updated? 🙂