Hey everyone, server population and faction balance has always being a hot topic in SWTOR. In response to the surging demands in the early days of SWTOR launch, many servers were opened up to drive down the server queues.  Come March 1st, oceanic servers will be opened up, this will add quite a few servers to the already extensive sever list.

To my knowledge, there has being previously very little, if any, study on the actual SWTOR population for each server. Bioware has not released any actual numbers and 3rd party sites lack the tools to analyze the population effectively (i.e. TORstatus.net offers a longitudinal examination of server load, but offers no insight to actual server population).

I have started a little project that will give some actual numbers to the population status on each of the SWTOR servers. This project is only completed for US PVE and RP-PVE servers. If there is enough interest, I can do the same for US PVP servers and maybe EU servers in the future. All the data are collected by hand, via creating two level 1 characters on each server and using the who list to record population numbers in each planet.

As it is impossible to collect data for all the planets for all the servers at the same time, I have restricted myself to 6 planets + the fleet for each faction and restricted my data collection to “prime-time” for each server (i.e. 6:30 – 10 pm EST for East Coast Servers and 6:30 to 10 pm PST for West Coast servers) over a span of 3 days.

The six planets studied are:

Top 10 PVE/RP servers for most population 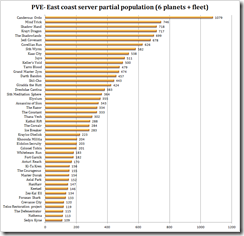 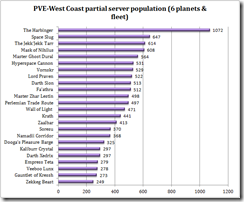 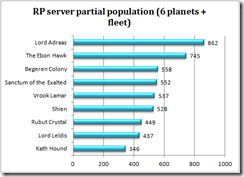 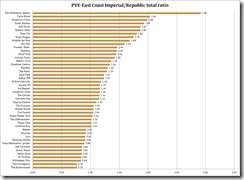 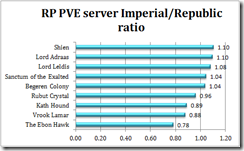 Most % of players on Ilum – Both factions combined

Most players on Ilum – Both factions combined

Most players on Ilum – Republic

Top 10 PVE/RP servers for most Republic players on Ilum

Most players on Ilum – Imperial

Top 10 PVE/RP servers for most Imperial players on Ilum

*Crevasse City had 0 Republic players on Ilum – divide by 0 and hence no value. 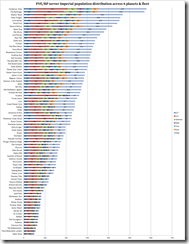 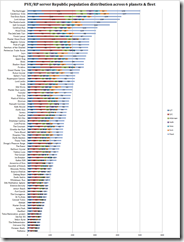 Estimated total population on all PVE/RP servers + other interesting stats

The raw excel data file with timestamps can be obtained here as a google doc for personal use only.

49 replies on “Some numerical population data for SWTOR servers”

WOW.. that’s a lot of legwork!  thanks for putting some numbers to a question i’ve been wondering for a while.

and totally glad that my friends stuck with Harbinger through the queue.

I would certainly be interested in seeing what numbers you come up with for PvP servers.

I would also be intested in seeing the PvP Servers.

[…] handy as well Anyways, here is the link to the results of the study – whole bunch of excel charts:Some numerical population data for SWTOR serversDulfy Here are some charts – to see the rest see the link above Some interesting info: I estimated […]

Wow, great work.
Were you queued for getting in to any of the servers? What is population cap (or best guess)?

hey yes Harbinger (my server had some long queues in the first weeks of release – 2hr queues. The top east coast still had a 5 minute queue the other day). My guess  is that the cap is around 5-6 k for both factions but I don’t have any solid evidence

Looks like Canderous Ordo and The Harbinger are easily the two best PvE servers to pick from.

I think some PvP servers would be worth checking out though.  I’d wager Anchorhead and The Fat Man both are pretty high population as well based on your Ilum number.

yes! Looking to check out the pvp servers this coming monday – weekend would inflate the pvp server numbers since I did all the pve server during the week

Excellent work, I wish you would have done a longer span though, there’s so many more people on the weekends.

yes now I have all the characters on all the pve/rp servers.. doing weekend is definitely a possibility and definitely interesting to see how much the population increased on weekends compared to weekdays.

My friends and I were thinking about rerolling Harbinger, what is the Imp/Pub ratio like? Your graph says it’s about even, but what do you think personally?

I have actual chars (not level 1 chars) on both factions in Harbinger. In the early days Ilum was dominated by Imperials and we all thought that Imperials greatly outnumber the Republics. This isn’t really true anymore, you will see very healthy population on both sides now – even on Ilum. Imperials still have a higher population overall though – on the fleet for example you will see 250 Imperials and 180-200 Republics  – also alot of Imperials like me are rolling Republic alts – so you will see a higher Republic ratio in the low level zones.

If you check out the google doc file I put at the bottom of the page (above the youtube video), you can search for The Harbinger and see some detailed numbers per planet.

That being said, I do have to warn you that we have a fair bit of Aussies here and many of them are planning to move to the real oceanic servers on March 1 – how that affects Harbinger is still remain to be seen

Thanks for your reply and excellent job on this data, keep up the good work!

Why did you only use PVE!??!  Server balance only matters on pvp….

But seriously thank you for putting in this much work, that was a very impressive read!

Initially wanted to do both actually but there were alot of servers and I didn’t know if people wanted the data or not so I released the PVE data first.

awesome job, im a pvp player.. would be nice if someone did the same for pvp servers… Im on swiftsure lots of people right now but with the aussie servers coming im kinda afraid… lol

Thank you for looking into the population and thank you even more for describing your methods and giving us the raw data.  I’m a scientist IRL and I appreciate that!  🙂

Nice! which field? I did a psychology/biochem major and did some research in biochem- hence my graphing/excel skills lol 😉

Ack.  The post was a bit too awesome, and I got inspired to run the same method on pvp servers (us) on both Friday and Saturday (two samples).  If I have time, I’ll run them again this week, see how much they move.
(putting link to data in website link)

Nice! I should have my data for pvp servers in the next day or two and we can compare! 🙂

Excellent work, just wanted to drop a note and say it’s appreciated.  I’m lucky to be on a server with a 1.04/1 Empire/Republic ratio.  I kinda knew it already, but it took me forever to find when I started back in January.  I used the less scientific method of starter areas + fleet to determine where to land.

Nice to see some numbers for once compared to all of the statistic sites. I’ve been doing something similar on the EU servers (So far I’ve only worked through a few but hopefully I’ll be able to get more done). I’ve been going onto Each side on my own server (Uthar Wynn EU sadly a dry server) and comparing numbers of people on at prime times between set level ranges such as 1-10 11-20 ect ect. If you’re looking for help for the EU side of things I’d be more than happy to help! Keep up the good work.

oh very nice! I will finish the US pvp servers this week and then take a look at the European servers if I can find some time. I will definitely keep you in mind, thanks! 🙂

Well best of luck with that 🙂 I’ve got about 2 weekends worth of prime time stats along with checking every other day so far. My servers on average 400 players on the whole server Inc. Republic and Empire compared to a more successful server of 2500+ at a prime time / weekends / raiding days. Infact we have more people on @ 12:00 for resets than anything else.

…wondering if this data was gathered before or after the European servers were added.

Also, where is Ajunta Pall?

Thanks for the great work!!

Hey this data was collected last week – I did not do the European servers yet. Ajunta Pall is a RP-PVP server I believe and therefore will be covered in the next population data post where I look at the PVP servers 🙂

Wow, amazing Job and thnx muchly!! Put some perspective into numbers for some of the diehards on the forums. I’d personally be interested in any PVP numbers if you do decide to go that route, understand its a large and long undertaking though, either way, thanks an Cheers!

Hmm so there’s a total of 143,291 concurrent subscribers in SW:TOR according to your calculations?

No, your math is wrong.  There are 71646, then he breaks down how its distributed.  You can double check by looking at his Empire / Republic distribution.

Like William said the estimated concurrent population at peak time on all US PVE server is 71k. This is a very ballpark number and not representative of the total # of subscribers at all. The estimation method is very rough as well – esentially taking one server’s population distribution (Harbinger) and apply it to 78 other servers.

so…how do you know the other 78 servers are as “full” as harbinger?

that is an interesting idea actually – I didn’t do it because I want to get a sense of how populated each planet is as this affects your questing experience. Also I was not aware that you can sort people by level range. This is something I will definitely keep in mind next time though!

Thanks for the info.  Would love to get a better idea of class distributions in the future. Any plans for that?

[…] To the right of this paragraph you can see an amazing snapshot produced by Dulfy. If you don’t know yet, Dulfy is pretty much THE God for Tor. She blogs pretty regularly on SW:TOR and has been the go-to source for anything. Dulfy created 2 characters on every server and charted the number of players on average. For more information on her methods see her original blog post here. […]

However, you can easily improve you own reasoning, as well as test your current level by simply taking psychometric test online yourself.

This is a great way to see how full the servers are generally, but it isn’t a very accurate indicator of the unique player population, the only way to see that would be using some type of back-end server metric that identifies each unique id. Still, glad to see my server is in the middle of the road area.

BioWare should pay you.  Does bioware pay you?  they should…

Yes! Please do this for US-PvP servers. Been looking for info like this since launch. Well done!! 🙂

Any server below 300, should be closed and they people should be given the chance to change servers or moved to server that has between 300-600 players. They made the mistake of having to many servers, and they have realized this by, so why is it taking so long to lock the big servers or cut out the smaller ones. I can only imagine how lonely it is on some of those servers below 300. I’m on sith meditaion sphere and its hard to find tanks and healers some times and pvp matches are mostly empire vs empire.