Hey everyone! As promised, here is the population data for PVP/RP-PVP servers. If you are looking for the equivalent data for PVE/RP-PVE servers, you can find them here.

Remember, this is just cross-sectional (snapshot in time) population data – this is the data anyone without sophisticated software or a team of dedicated researchers would have obtained if they made level 1 characters on all the PVP servers and checked out the planet population numbers using the who-list window during peak times. It is not actual total population data but rather a representation of it. There are limitations with every study and every methodology – like everything else in life, take it a grain of salt!

For this study, 7 planets (Tython/Korriban, Dormund Kaas/Coruscant, Alderaan, Tatooine, Hoth, Voss, Ilum), 3 warzones (The Pit, The Civil War, and The Voidstar), and the fleet were used. Who list window limits to 100 results so for servers where the population in an instance capped at 100, whispers were sent to 4-5 people on that particular instance to notify me of the actual population in that instance. Population numbers are extremly finicky for warzones as there are people exiting/entering warzones all the time – there is about a 30 second to 1 minute delay (logging off character from one faction to the other) between collection of warzone population data of the two factions – during this time population can change so sometimes you may see uneven numbers on the two sides (i.e. 12 Republics vs 16 Empire players in Huttball). 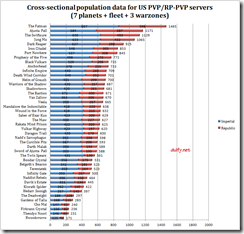 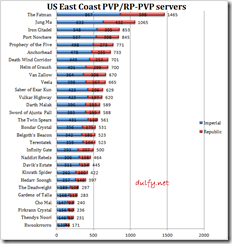 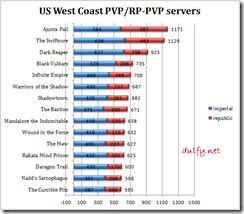 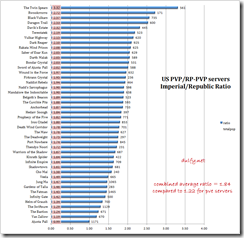 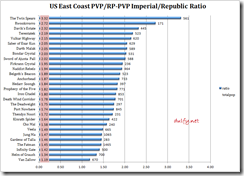 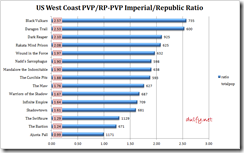 Servers with the highest numbers of players on Ilum (both factions, number to the right is % of total server population from above) 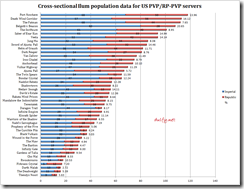 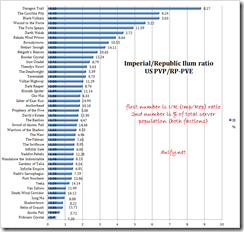 All servers – ranked by most people in warzones (both factions) 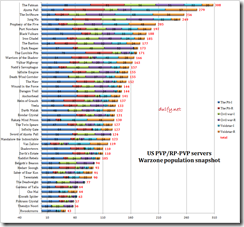 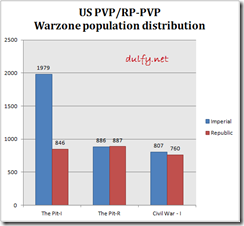 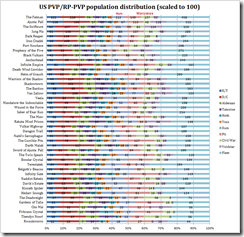 Raw data – Google docs format – for personal use only.(click on the image to download) (Best to download as excel file) 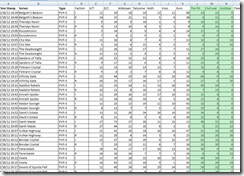 Good job on alot of work.

Question though, at what time did you do your tests at? Did you do the West Coast servers 3 hours after the East coast ones to account for the different populations being active at different times?

Nice info… I wish BW had you working in their Business Intelligence reporting.

I believe you mislabeled the warzones in your “Imperial & Republic Warzone population distribution – all servers combined” graph.  I’m guessing those should actually be “The Pit” “Civil War” and “Void Star” instead of “The Pit – I” “The Pit – R” and “Civil War – I”

Ah yes, you are absolutely right! Should be corrected now, thanks for spotting this!

Happy to help out, and thanks for the great effort you put in!  I look forward to more useful insight from you in the future.

As you can see Ajunta Pall is in heavy NEED of imperials ! never any imps to fight… we are always faced with rep v rep huttballs

This is a brilliant piece of work, thank you for all the effort.  It will help inform the decision making process for my guild when server transfer comes available, slated for April according to Zoeller.

[…] Did the pvp one a couple days ago, here are the findings: Numerical SWTOR population data for US PVP/RP-PVP serversDulfy Reply With Quote « Previous […]

Hey dulfy, really awsome jobs done here. I know it’s a long shot but can you analays (even just ratio would be perfect) like that to the Europen (english only) Servers?  :))

sure thing, I will see if I can slot it sometime next week if not then definitely the week after 🙂

Thanks for reply, I’m really looking forward it 🙂

Any ideia when u can do it for the Euro servers dulfy? Would be awesome

What time of day did you take this data?

6:30 pm to 11pm EST for east cost and the corresponding hrs for west coast

Can Thendys Noori please be merged with another server?  As a republic it’s so lonely in here 🙁

Mass Exodus happend after 2 weeks
Swtor has to manny core issues and missing feature’s in 2012 mmorpg’s.

Somehow Harbinger didn’t make the lists even though its always one of the top 2 for server traffic on the load in screen. That sure makes it hard to trust the numbers.

this is for PvP server, there is another page for the PVE ones, where Harbinger is there.

[…] The site is absolutely the best place for SWTOR statistical data – among other things – as evidenced by her thorough census data. Lucky for me and this follow up post, since I wouldn’t be able to write it without that data.  […]

… Jedi Covenant didn’t make it?  I think it was top 10 in server population last I saw.

Jedi Covenant is a PVE server.  This is population on PVP and RPPVP servers.

Love the guides and charts. Wondering if you’re planning on doing an updated version of these charts. Be interesting to see how things may have changed over the past few months. Thanks. 🙂