Hey everyone, this guide will cover the flashpoint Red Reaper, it is an often neglected flashpoint aimed at people in the level range of anywhere from 42-47(or even 50). It is a rather short and quick flashpoint and fairly easy if you know the boss fight mechanics. I skipped this flashpoint on my Empire character due to the rush to 50 but I will cover it on my Republic character.

A word about trash

The trash in this flashpoint can be difficult if not properly controlled. You often get groups of “strong” mobs that can dish a lot of damage to your group unless is the tank is quick to pick them up or your members use some sort of crowd control abilities. They often don’t cluster together either, some will stand by a corner and just shoot at your group from a distance.

Later on when you get to the “elite” trash mobs between the 2nd and 3rd boss you can use the terrain to your advantage and knock them off to their deaths. Beware that this can cause some trash mobs to bug out if they don’t die after falling so use it sparingly. 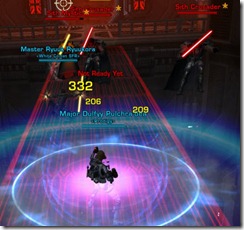 Overview: Interrupt Kherus’ soul drain on the hostages and either heal through or LOS the crates he throws at your group. Tanks will need to taunt him back when he jumps to someone else in the group.

Lord Kherus is the first boss in this flashpoint, he is standing by a bunch of hostages and has the following buffs

First part of the fight is tank & spank where the boss is standing. He will leap to someone else so tank will need to taunt him back. At around 80% he will leap to a hostage and cast Soul drain, which needs to be interrupted. 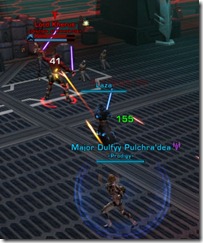 Right after that soul drain, he will leap to either side of the room and throw crates at one person in the group (for the two times I did this he always jumped to the left side of the room first and the next time he does this he went for the right side of the room). The crate doesn’t hurt too badly and can be healed through. If the healer is having trouble, group members can LOS (line of sight) the crates on the nearby pillars. 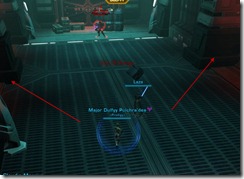 After the crates he loves to leap to another group member so tank will need to re-taunt him back.

He will repeat this pattern until he is dead. Overall very fast and easy boss. 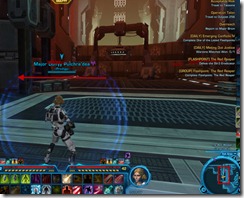 Overview: Go around the boss to his back and clear the trash there to give you more room during the boss fight. Make sure all the pillars are NOT the same color as each pillar will give him a damage buff specific to his two “colored” abilites. If all 6 pillars are the same color he will likely one shot whoever he has aggro on.

I highly recommend going around the boss to his back and clear out the trash mobs back there. This will give you more room during the boss fight and not have them potentially add during the fight if a group member wandered too close. 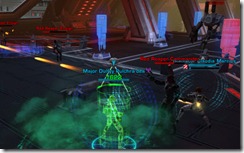 Other than the beam abilities, the boss has an ability called Concussion Charge that will affect all players near him (it’s a knockback and snare). This snare can interfere with the pillar clicking but luckily the snare can be cleansed off. Players standing on near the pillars furthest away from him will not be affected by this ability.

Usually we have the healer covering one side of the pillars and a ranged dps cover the other side and just click on the bottom of the pillars to change their color when the boss switches them to uni-color. This will ensure that you will have at least two pillars that are of a different color and damage can be healed through. 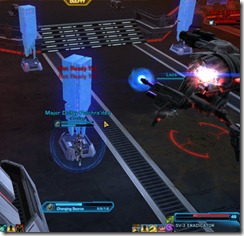 Overview: Pull him across the bridge so that you don’t get knocked off the edge when the boss does his knockback. Tank and spank until adds spawn, then have everyone run and stack behind the 2 adds and interrupt the spell that the add is casting – the lighting from Ikoral will kill the adds for you when you do this. When the fires spawn, make sure the tank runs and grabs some of them or he will take a lot of damage once Ikoral starts attacking again.

First thing, make sure you pull Ikoral across the bridge or have the tank and melee dps positioned so that they won’t get knocked off the edge when the boss does his knockback. Don’t be like this guy!

He has 3 phases. Phase 1 is tank and spank but watch for the knockback. Ikoral has a very nasty dot called Crushing Darkness that ticks for a lot of damage. You might be able to cleanse it off or if not heal through it. This dot is applied to a random member in the group.

Phase 2 starts with the follow emote on screen: Ikoral has awoken his chosen sith! When this happens two adds will spawn on the west and east side of Ikoral. Don’t bother damaging Ikoral or the adds that spawn. Have everyone run behind the two adds so they the lighting from Ikoral goes through the add. Interrupt the Ancient Terror that the adds are casting and they will die automatically from Ikoral’s lightning. 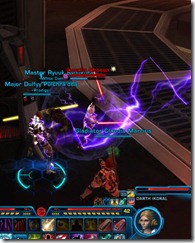 Ikoral will go back to phase 1 and then phase 3 starts shortly with the emote: Ikoral is channeling the ancient power he has gathered!. During this phase, there are fire on the ground that should be picked up – tank and people likely to get hit should have priority – each fire give you a buff called Ancient Knowledge – which reduces your damage from Ikoral by 50% per stack and max at 4 stacks. 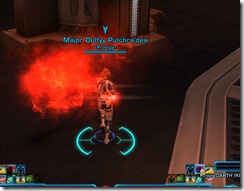 Gather these fire quick because if you don’t hurry, Ikoral will grab them the remaining ones. If your tank has the buff, then this phase is not too bad. If not then Ikoral will hit like a truck and could potentially kill your tank. Phase 3 is rather short so it is not too problematic.

When Lord Kherus goes into his crate-throwing phase, he stops throwing them when someone reaches melee range.

interesting, thanks for the info! 🙂

Unless they are killed first, the trash behind SV-3 always aggros when it’s destroyed. I’ve never, ever seen them add mid-fight, though.

little late to the party BUT… using this guide and that blue / red pillar stuff and killing the bridge adds FIRST has allowed me to solo solo this FP with no companions. do wish i had scav instead of credit crew skills….its a long run that lift could cut a lot of time off.
i do want to add though, that you can avoid the mobs in the room pictured about the lift in need of repair? by going straight thru the middle and jumping over the foot of the crane thing pictured going left, then hopping on the crates youll see around the corner, onto the troop carrier and then over the large containers down below the turrets and the one droid. which you can go to the far right and around the support pillar and sneak thru the door….same for the turrets on the bridge, go right inside the room and more right to flankt he bridge adds…if you clear the adds first then engage from the bridge console side parked by the one pillar… its a snap, tough to heal and fight thru but i do it daily 😉

and i was, about a month or so ago, confused and frustrated that i couldnt damage the end boss and those little healing witches! and as a hunter the other guide i ran across on this FP noted that a hunter cant solo this FP because hunters dont have a interrupt that stuns the witches into getting fried by the bosses lightning…but i DO have a interrupt ….and was able to finish this FP solo solo, using the tips found here. i prefer to kill ALL the mobs and sell ALL the loot but thats my personal quirk. thanks for this guide and the whole web site, i think tor fashion has been my favorite part….