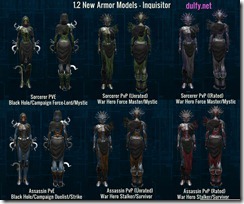 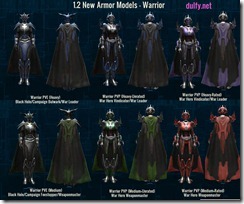 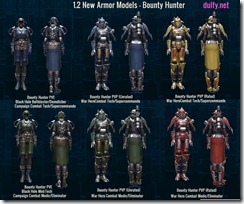 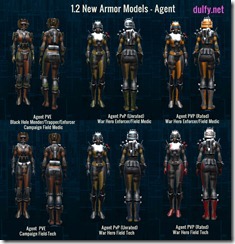 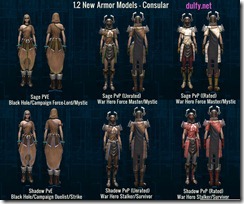 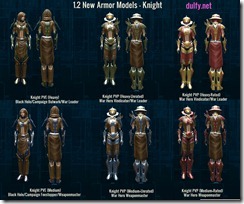 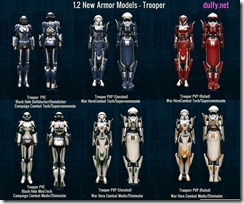 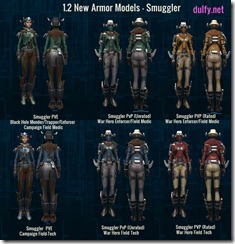 omg what a load of crap, bioware does know this is suppossed to be Star Wars and not Dragon Age surely?

Nice work as Always, Keep it up! best SWTOR source info ever.!

they all lppk ugly as sin…Bioware make something simple and good that everyone actually wants not dragon age trash! simple good robes. the ones from the trailer were awesome…the closest to them you can get are the Battlelords armour. but what about the JK armour your wearing during character creation. thats awesome gear.

PVE Sorcerer armor wan’t all that bad (minus the dunce cap), but this Sorc gear is exactly a step in the wrong direction.  When i think Sith Sorcerer, that ‘C’ curve stuff coming off the wrists, boot, and shoulder does not pop into my mind.  this is way more Dragon Age than Star Wars.  it looks stupid.

On the plus-side, you aren’t stuck with it any more if you don’t like it.

true, but i can only imagine the cost for ripping out all the mods.  better start doing my dailys again to build up my cash.

Great work m8!
I hope there will be more info from PTR … like raids/talents/crafts/dailies and stuff like that.

Please make some pictures with the gear on a Male character!

What is the gear rating for these new sets?

[…] 1.2 New Armor ModelsDulfy | Dulfy Hey everyone, I went on the PTS after 1.2 went live and took screenshots of all the new tier endgame PvP/PvE armors. The first two pictures are just showing you the new models while the next couple wi… […]

OH GOD….The republic sets look ridiculous… I hate to say it but the artists shouldn’t be alowed to continue this.
WTF is up the the pve sage…On a male character…showing a little bare shoulder…OMG…are they supposed to look GAY as #!@$

disgusting, horrible… my english even cant stand against how bad they are… seriously?!

Better a skirt then a dress for the sorcs, but all those very non-practical “attachments” and things that stick out still suck. 😉

Definitely take some pictures of these sets on the male model, cause the majority of them look like shit on females. Try Body Type 2 if not 3 for the male.

Have to say that war hero armor is just a vanity item. Anybody with half brain will be using critted orange gear with transferred mods.

WTF is this shit?

How many “I dislike these designs” posts are you going to make?

as many as it takes!

go here Jeff, probably you can convince the devs 😉

[…] 1.2 New Armor Models Hey everyone, I went on the PTS after 1.2 went live and took screenshots of all the new tier endgame PvP/PvE armors. The first two pictures are just showing you the new models while the next couple will show you all the color variations possible within a class. There are currently 2 color variations for …Continue reading » […]

Because I only have female characters lol. I could level up some male toons in the next few days.

That would be great Dulfy! 🙂 Gonna try and level up a Male Character and try em out too, although I already know they will still look like crap. Thanks for these btw!

Thank you for your effort to upload these! :o) Might I ask if it’s possible to get the male versions somehow?

anyway, thank Sith, we can extract mods from it and use somewhere else =)

neither is your spelling.

I´d call it Green Goblin rather than Spiderman.. but.. yeah. But still I find the Sage PvE and Agent PvP kinda good. I like the way it looks.. everything else is just.. too much for me. I´d really appreciate something casual for the smuggler.. not something like this… It looks more like a RepSpecOps.

Did they have one of the programmer’s retarded sons design this crap?  It’s probably the worst looking armor in any MMO ever made, including the Q-Basic one I helped make in 6th grade.

Cant help but notice how Rift-ish these look.

sucks!! Give armor mods on epic lvl and let us raiding in orange armors. This sets sucks like hell, wtf guys?! Where is this nice robes/armours from kotors??

It’s like BioWare has something against Jedi Knight’s wanting to have their helmets showing.

I love SWTOR, very fun game… not doom talk here but c’mon…
Some of those are ok but most look like someone has a hard-on for HR Giger.
This looks more fantasy than sci-fi / space opera.

What’s up with the agent anyways? I thought I was supposed to feel like Tarkin … Just give us imperial uniforms!

The new Bh PVE looks like a power ranger….

For the sorcerer it looks like the designers watched NY fashion week and copied the reject ideas.  The scythe blades on the arms makes sense, but the shoulder and knee are confusing.  The colors ok I kinda get but the shades are awful! Seriously if they tried to put the color scheme on fashion runway they would be laughed off and then booted off.

so glad i stopped playing swtor, it’s screw-ups like these that reinforce my decision

seems to be showing the female armor only

I think they hired the people from Guild Wars to design these… they both have “wars” in the name… that makes them the same, right?

Do u guys believe in Conspiracy Theory? I just cant believe BW artists are SO BAD. Actually my grandma will do it better lol. So, call me mad, but for me that sh1t looks like attempt to sabotage the game from within.
P.S.
JK’s “night-pot” helmets made my day=))

do these make anyone elses eyes burn?

What they need to do is stop getting art school dropouts to design their gear and hire a fuckin gay fashion designer, at least that man would have the sense to tell the dev’s OH DEAR CHRIST before they decided to go with these sets…

Hello! I have a question. In the Consular one, the pink armor says ((rated)), while the blue-and-brown says (unrated). What does ((rated)) and (unrated) means, exactly? Thanks for reading! 🙂

Hey, Rated and Unrated are two versions of the War Hero armor. Unrated versions do not have a PvP ranking requirement to wear while the Rated version does. Think Rated as a way to show your experience in PvP. Stat wise though there isn’t much different between the two. Rated armor is just an empty shell that you can put your own mods in.

I see. Thank you very much! 🙂 In that case I will just use the unrated version. Nothing against pink, but I like brown-and-blue better xD

Man im so glad that i unsubed week ago

plz do not do this.. seriously lol, ppl will quit the game

i like the sw pvp armor, bh pvp is an improvement… the cent-champ-bm armor for the trooper and smuggler looked better. sorcs look like shit but an improvement imo. really dissapointed with the ia.

I’m not too happy with the look of the smuggler, but as long as I can rip out the stats from the armor I’ll be content.

…Face-Palm….I really am shocked that this is what they decided to go with.  What’s even more shocking is that an entire ROOM full of people, who call themselves Star Wars fans (hopefully) actually looked at this and decided it was a good idea….I still can’t wrap my head around that one.

All of the Sith Armor is a cross between Super Shredder from TMNT 2 and Sauron from Lord of the Rings.

……and the sage has on PARACHUTE pants for God’s sake….I mean COME ONE GUYS! Not a single robe for the Jedi either?

BIOWARE just focus on making a Hood UP/Hood DOWN option….and try to include actual Jedi Robes at some point too….maybe in update 20.1049 they might start listening to the loyal PAYING players….keep it simple.

this is about the ugliest shit i have ever seen… wtf were they thinking??? this is just f-ing terrible… to say the LEAST

[…] again go out to Dulfy who was able to take the time and test out many of the upcoming 1.2 features on the Public Test […]

Thanks for the article and photos
But can you put up some Male Armor especially the Sage / Sorc.
I hope the male PVE for Sage will be half shirt 😉

Here is the Devils Advocate question of the day however.
Just what direction DO designers go in, when designing new armor appearances ?
If you use the movies, and cartoons about Star Wars as a Reference, then we’ve already seen most of what you could conceivably imagine as variants w/o being direct copies.
I agree some of the armor models they are showing I would personally not wear. My question wasn’t so much to cause an argument or to debate the fact that the armor models are less than stellar to look at.
My question was born from the thought I had upon looking at the models, thinking to myself, “what is this game going to look like a few years from now, how will my character look?”
In other MMO’s part of the draw to do better and participate in Raids/Operations whatever you’d like to call them, was to get cool looking gear, and as shallow and superficial of a reason as that is to play and pay for an MMO, it worked for many a people to increase the longevity of ones interest in a particular game.
Eg, (that’s why I played WoW for 7 years because while I was waiting for more interesting content and story, some of the cooler armor sets, and other assorted gear kept me just that much interested that I stayed through the not so interesting content times.)
Many of the other games have featured armor sets in them that have come out in later expansions years after initial game release that if you saw them when you first started playing you’d be like “WTF game did THAT come from, it’s hideous!” However good or bad, those armor sets were only bound by a wide style, either Mideval, or High Fantasy or such, where they could afford to have very varying looks. However with Star Wars, you don’t have that much room to play with. The armor and gear we’ve so far seen in the Movies and games as I said earlier, has been of a small varying degree. So basically w/o just doing some color changes over the years, which would get pretty boring, where do you go as far as armor model looks for NEW sets and content, that AREN’T somehow outside the scope of the Star Wars “Feel” and Design.

thanks for the pictures

I find only the pvp sorcerer set good looking. The rest is either mortifying or does not make any reaction on me.
In my opinion it’s like the world of chinese fake plastic toys industry invaded the Star Wars galaxy.

BW needs to fire the design team and hire a bunch of potheads not DeVry graduates.  This crap sucks across the board.

At least it doesn’t have horns… 🙂

my god. that is SO BAD. esp. head pieces.

glad I came back, whomever designed this crap..I hope they get sucked into a black hole, was really bad then and now after 4 years of improvement..ya they are really really really bad