Hey everyone, with the coming of patch 1.2 in early April and the arrival of ranked Warzones, there has being a huge surge of interest in PvP. For many people who are not avid PvPers or keep up with the latest development on the Public Test Server (PTS), it can be confusing to know the PvP gearing changes in 1.2. This guide hopes to demystify all that and provide you with a comprehensive overview of the PvP gearing process in 1.2 and detailed stat comparisons between different PvP sets.

This guide is quite large and is divided into different sections, use the navigation bullet points below to quickly jump to a section.

There will be 5 sets of PvP gear in existence once patch 1.2 comes out. Centurion and Champion will no longer being sold. Battlemaster will be getting an expertise buff and two new sets can be obtained: Recruit and War Hero. The sections below will be doing a detail comparison of the 5 sets, for now lets starts with a comparison of the expertise on these sets!

Something to keep in mind is that Expertise is getting a new diminishing returns (DR) in 1.2 in its conversion to PvP Bonus. The new formula for Expertise to PvP Bonus is

The best way to figure out how much PvP bonus a certain amount of Expertise is giving you is to plug in that equation into Excel and let it do all the work for you! 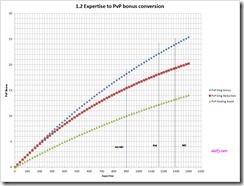 Here are the expertise numbers for full sets of gear from each of the 5 sets. PvP damage bonus difference is from the previous set to the next , for example 4.21% is from Champion to Recruit.

Note that below where I mentioned PvP bonus, it is specifically referring to PvP Damage bonus.

Recruit vs Champion vs Centurion

Champion set is being replaced by a new set of gear entirely once 1.2 rolls out. This new set is called Recruit and it has a lower rating (128) than Champion (136). It is also only blue in quality and has no moddable slots or set bonuses. What it does have over the Champion set is the extra expertise.

If you have Champion gear on yourself or in your inventory when once 1.2 is live, it won’t be downgraded to Recruit (see this dev post for confirmation). Champion gear will just be no longer be purchasable.

Much like the Champion gear, Centurion gear will no longer be sold in 1.2. It will still remain on yourself or in your inventory if you have them.

The costs for the new Recruit gear are as follows:

So the total cost for the entire Recruit set is 320k, not too expensive for a starter PvP set. You will get 896 Expertise in total, which is equivalent to 18.20 % PvP damage bonus under the new expertise formula in 1.2

You must be wondering, while the Recruit set give me about 4.21% more PvP damage bonus, what stats do I lose if I swap to Recruit from Champion? What if I am wearing Centurion gear, should I purchase Recruit?

The answer to the Centurion vs Recruit question is pretty easy to answer. Centurion and Recruit have similar stats but Centurion is short on about 7% PvP damage bonus (about half the expertise). For example, take a look at this Force-Master set for Sorcs/Sages (using only 1 PvP relic). If you have Centurion, it is better to just purchase Recruit and be done with it! 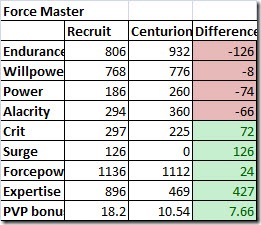 The Champion question is harder to answer.

What I will do next is give you a bunch of tables. I choose 3 sets of gear (Force-Mystic, Weaponmaster, Eliminator) for detailed comparison purposes. For the rest of the gear sets I will just use AskMrRobot’s handy gear builder to give you the overall stat difference.

Lets jump to the overall stat differences (click on the gear set name to go to Askmrrobot’s character builder with the items already filled). Note that the stats you will see in AMR’s char builder are a bit different from the ones shown here because they added the +250 primary stat and +225 endurance for level 50 characters. For comparison purpoes it doesn’t matter at all. 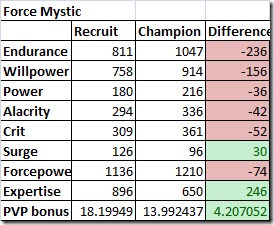 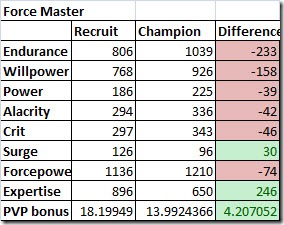 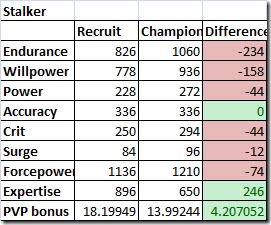 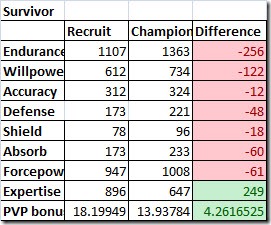 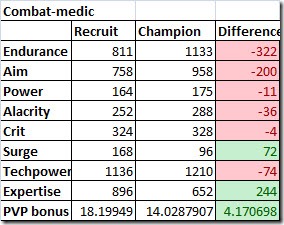 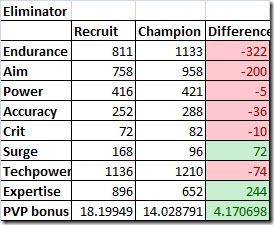 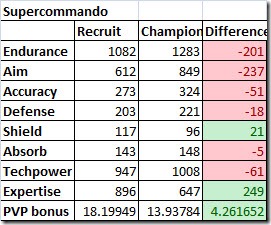 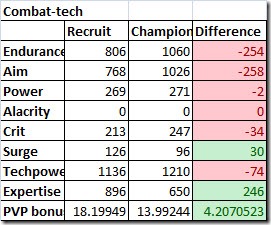 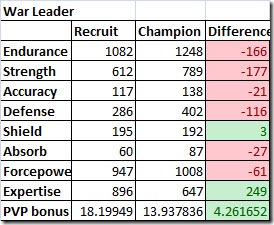 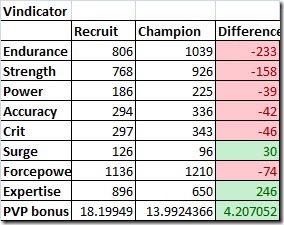 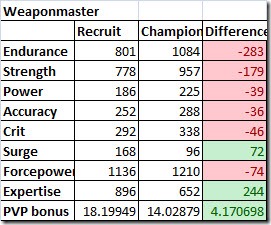 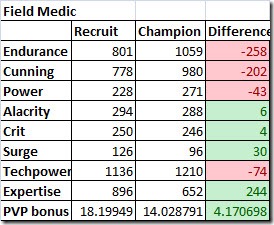 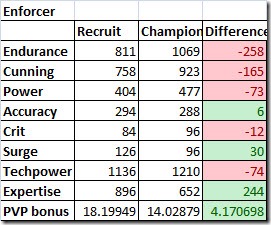 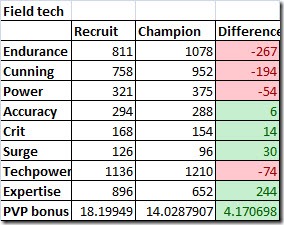 As you can see, you will loose quite a bit of endurance (177-300, roughly equivalent to 1.77k to 3k hp) and primary stat (120 – 260) as well some secondary stat if switching to Recruit gear. You will also lose your set bonus as the new Recruit set does not come with a set bonus. Despite the fact that Recruit set give ~ 4.2% more PvP damage bonus, it might be better to stick with Champion and just upgrade directly to Battlemaster.

Battlemaster gear in 1.2 will no longer require a valor rank to wear and can be directly purchased using Warzone Commendations. The exchange rate is as follows

Battlemaster gear is getting a huge expertise buff from its pre-1.2 form while secondary stats (power, alacrity, crit, surge, etc..) are being modified. You may be wondering exactly how BM gears are being changed. Most database currently do not have updated 1.2 BM stats but luckily with the help of Ezmode from sithwarrior.com (who did all the tedious data entry in Excel!) I have here all the updated BM stats in a chart format and can utilize AMR’s char builder to do full set comparisons in stats between the old and the new BM.

Let me show you first the updated Battlemaster stats on the PTS (which will likely be the stats once 1.2 goes live). If you prefer to see these in screenshot format, you can find them here. 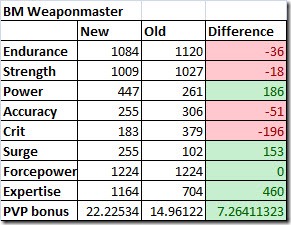 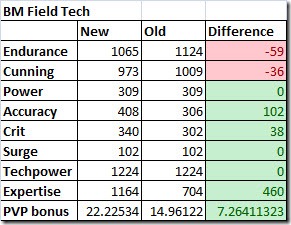 War hero is the latest new PvP tier in 1.2 and like the new Battlemaster set, it has no valor requirement to wear. It has two versions for its armor pieces: Unrated and Rated. Unrated pieces requires corresponding Battlemaster piece to trade in (i.e. Battlemaster Force-Master to trade in for War Hero Force-Master) and a number of Ranked Warzone Commendations. The exception here are the ear/implant/relic pieces which requires normal and ranked Warzone Commendations to purchase. 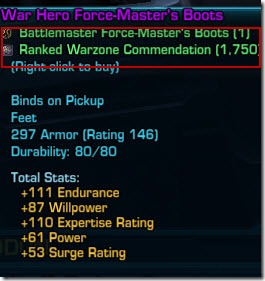 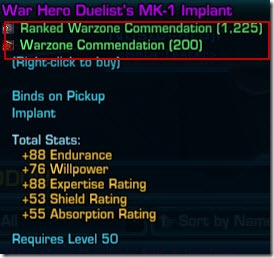 Rated pieces, on the other hand, requires you to trade in Unrated pieces for bracers/belts while the rest of the armor sets (chest, legs, boots, head, gloves) are empty shells that do not require a trade in of the corresponding Unrated piece. All the Rated pieces have a PvP rating requirement to wear. There are no stat differences between the rated/unrated bracers/belts. 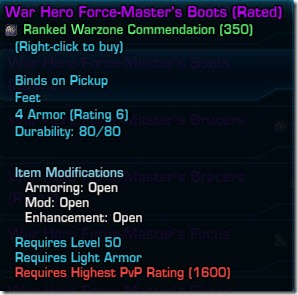 The table below will tabulate the prices for Unrated and Rated War Hero armor. These prices are from the latest patch (March 22 on the PTS). As you can see, there are no Rated versions of Ear/Implant/Offhand/Mainhand/Relic. 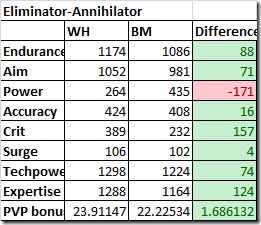 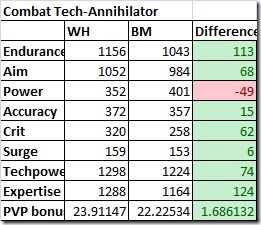 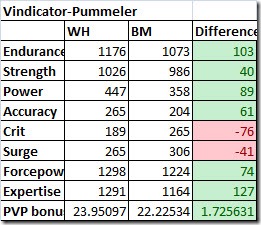 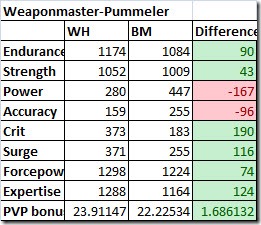 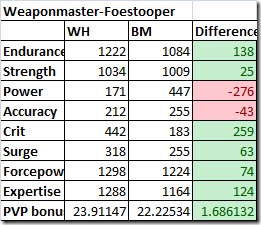 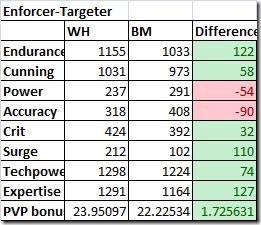 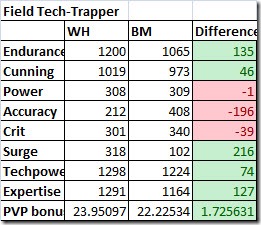 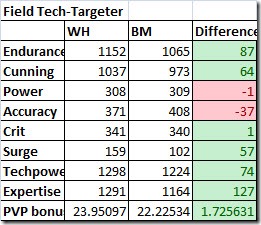