Hey everyone, patch 1.2 will roll around soon (estimates for its deployment are early –mid April). This means that you have maybe about 1-3 weeks to be prepared for 1.2. What is there to prepare you ask? Plenty of things! If you are a huge overachiever, the next few weeks you will be quite busy!

This article is divided into sections, jump to a section that interests you or read all of it!

If you have being keeping up with the PvP changes in 1.2, you will know that Centurion and Champion sets are no longer available for purchase. These sets are fully moddable (including the armoring slot) in 1.2 so if you like their looks, definitely buy a set now! Personally, I know I will be purchasing the Centurion set just for their looks as they have a shade of purple rather than the overused red on all the other Empire endgame gears.

More importantly, if you are planning to jump into PvP at all in the future and you are no where near Valor rank 60, having a full set of Champion will also give you a hand for PvPing in 1.2. The new Recruit set that is coming in 1.2 to replace the Champion/Centurion has worse stats and is not moddable at all. The only good thing about the new Recruit set is that it has much higher expertise (about ~4% more PvP bonus than the Champion set, ~7% more PvP bonus than the Centurion set) and can be brought for around 300k credits for the whole set. It solves the whole chicken and egg dilemma pre –1.2 where you need to PvP get to expertise gear but if you have no expertise at all you will likely get slaughtered.

If you are already reached Valor 60 or about to, get as many Battlemaster pieces as you can! You might be wondering why you should bother when all the Battlemaster pieces can be brought via Warzone Commendations in 1.2.  Well, Battlemaster gear is needed to trade in for the War Hero stuff, which is the newest tier of PvP armor. If you already have a couple of BM set on you, you can just jump straight into ranked warzones right away and start earning Ranked Warzone Commendations for your War Hero gear. Think of it this way, you can either grind for BM gear now or after 1.2. If you grind for it now, you will be slightly ahead!

With 1.2, there are some new rewards for purchase on the daily vendor in Corellia (Black Hole area), Ilum and Belsavis. If you have being grinding dailies for a while, the thing that will probably interest you the most are the new relics. These relics are better than the relics that drop from Nightmare operations currently and cost 200 Daily Commendations to purchase (not all the new relics are shown) 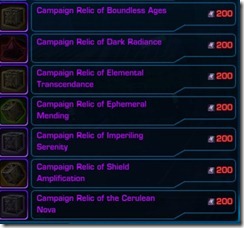 For those of you soloing Lights Out on the Empire side, you will be sad to know that it may no longer be possible to solo this Heroic Daily come 1.2. The part that stood out in the patch notes is this: Lights Out: A mission step to defeat Field Commander Anhur has been added to this mission.

White and other Crystals

In patch 1.1.5 an unmarked crystal vendor was added directly opposite the Galactic Trade Terminal. This vendor will be removed once patch 1.2 comes out and he sells crystals, the most important one is probably white crystals. The reason for that is that other color crystals can still be obtained via crafters once 1.2 hits but white crystal will be gone from the game (see this dev post for confirmation). 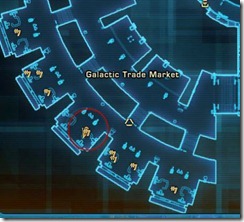 So save up your credits and buy those white crystals if that is your thing! The cheapest white crystal cost 1 million credits (+31 stats) while the top tier costs 2.5 million credits. You might be wondering if it is worth the purchase if the crystals might be “replaced” in the future by crystals with better stats. This dev post should assure you that a replacement is not coming anytime soon. 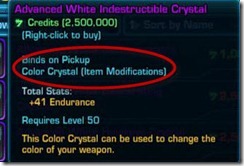 So there are a couple of those huge speeders that are no longer available for purchase in game after patch 1.2! (see dev confirmation/clarification here)

These are the following

Prince/Sovereign requires valor 65 to purchase so if you are not valor 65 by the time 1.2 hits, you will lose your opportunity to purchase them.

Tirsa Prime is being sold currently for 1 million credits and after 1.2 it will be moved to the VIP vendor at an increased cost. Personally, it is such an ugly mount (looks similar than the one you get from killing Soa/Karagga on normal mode or from killing the last boss of Kaon Under Siege flashpoint) that I wouldn’t really bother with it.

Tirsa Prime/Korealis Commander/Korrealis Baron are being sold at the Vehicle vendor near the GTN (Galactic Trade Terminal). Korrealis Prince/Sovereign are sold on the PvP vendors in the Combat Training Section of the fleet. 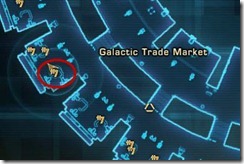 Legacy system is coming with 1.2 and it has something pretty much for everyone. If you want the class buffs from the other 3 classes, you will need to level up alts and have them finish Chapter 2 of the class quest. This will allow you to receive 3 other class buffs everytime you press the button for your own class buff (see dev clarification/confirmation here). If you want their cool class specific Heroic abilities on all your characters, finish chapter 3 on all of them. If you want to unlock their race for use on all your future characters, grind them to 50 or pay 1.5 million credits.

If you want to get a small bonus to your Accuracy, Crit chance, Surge, Healing received, Max health, and a huge boost to Presence, then it is time to do all the quests for your companions! These bonuses can be unlocked as soon as 1.2 hits if you do all the companion quests now.

If you want some of the cool stuff like reduced CD on fleet pass, reduced CD on quick travel, rocket boost (advanced sprint), fancy stuff for your ship (repair droid, mailbox, GTN, training dummies), and cool new emotes, be prepared to grind out those legacy levels and credits! Most of these features only require a max legacy level of 15 (ship GTN is an exception) but cost  a huge amount of credits. If you want all of these features, be sure to have a couple million credits saved up!

Crafting is getting a huge revamp in 1.2 with many big changes that are making professions other than Biochem much useful at endgame.

The first thing you will want to do is stock up on the endgame crafting materials (Biometric Crystal Alloy, Self-Perpetuating Power Cells, Alien Data Cubes, and Rakata Energy Nodes). Quite a lot of these drop from Operations but the Biometric Crystal Alloy is obtainable from doing Hardmode flashpoints. The reason for that is these materials will become tradeable in 1.2 but drops much less frequently. So hoard them now and sell later!

Armormech, Armstech, and Synthweaving are getting the ability to craft augments in 1.2 as well as the ability to reverse engineer items into empty orange shells with the same name and appearance. This allows for further character customization and also the possibility of augment slots. So if you don’t have a character with one of these crafting skills you might look into leveling an alt for that!

If making different color crystals is your thing, you might also want look into artifice as they are getting quite a few schematics that allow them to craft crystals of pretty much every color in existence except white.

Slicing is likely to be a highly profitable gathering skill in 1.2 since it will be the source of mats required by all the augment crafting.

Lastly, the 3 mission skills (Investigation, Treasure Hunting and Underworld Trading) are likely good ones to pick up as well since they now have an increased chance to provide schematics.

It may seem like that I am recommending you to pick up almost every crew skill profession. This is true to some extent! Crafting is getting such a huge revamp in 1.2 that it would be silly to not jump on the bandwagon and make some profit in the process! Since you will be likely leveling alts for the Legacy system anyways, why not cover your crew skills too!