Hey everyone, with the upcoming release of 1.2, there will be two new PvE endgame armor sets to “grind” for. One is the Black Hole MK-1 armor set which can be purchased via Black Hole Commendations that drops from Nightmare Karagga’s Palace, storymode/hardmode Explosive Conflict, and Corellia Black Hole weekly. The other is the Campaign set whose tokens drops from hardmode Explosive Conflict bosses. Hardmode EC bosses/chests also drops Black Hole MK-2, MK-3 pieces directly (i.e. you get the specific armor pieces, not tokens).

The prices for the Black Hole gear are listed below. Keep in mind that the vendor does not sell any weapons (mainhand for most classes, mainhand + offhand for dual wielding classes) or relics.

For Campaign gear, it is simply 1:1 exchange of the tokens you loot from bosses like you do currently for Rakata gear. The Campaign vendor does not sell any ear/implants. Campaign relics can be brought for 200 Daily Commendations from the Mission Support Vendor on Ilum/Corellia/Belsavis.

I originally wanted to do an old Rakata vs newly itemized Rakata and “new” Rakata vs Campaign gear comparison to give you a feel of how much stats change when you upgrade to the next tier. Unfortunately, with the recent itemization changes back and forth on the PTS for both Rakata and Battlemaster, I will wait abit before doing so and update this page when I do.

Note (already mentioned above but I want to re-emphasize it): 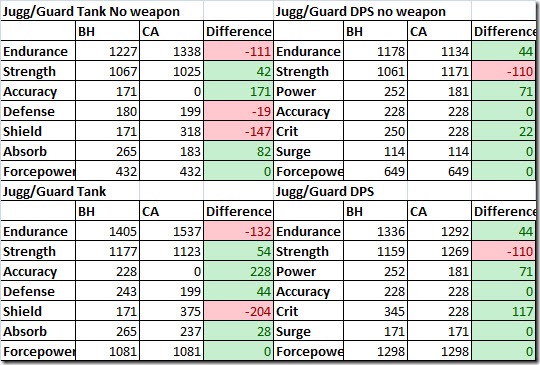 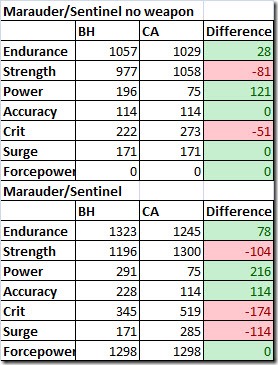 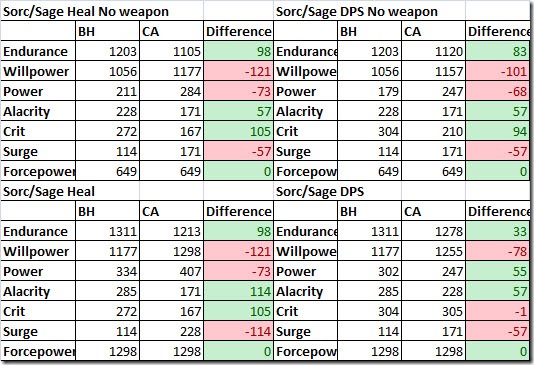 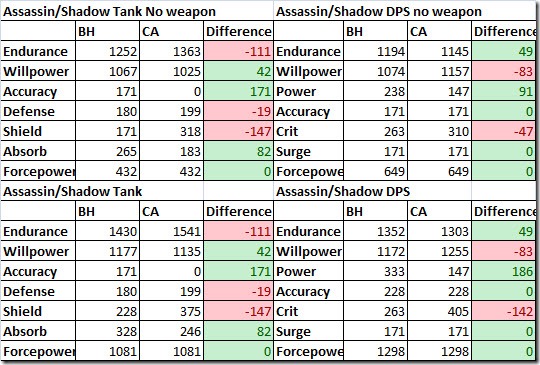 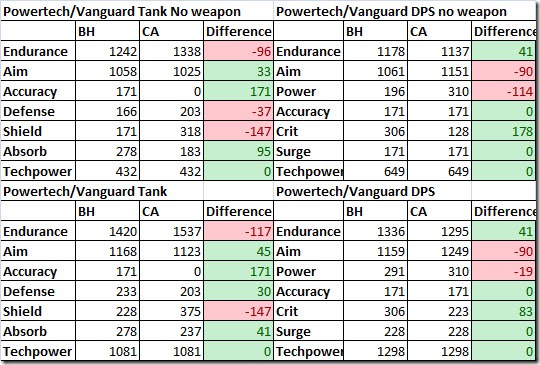 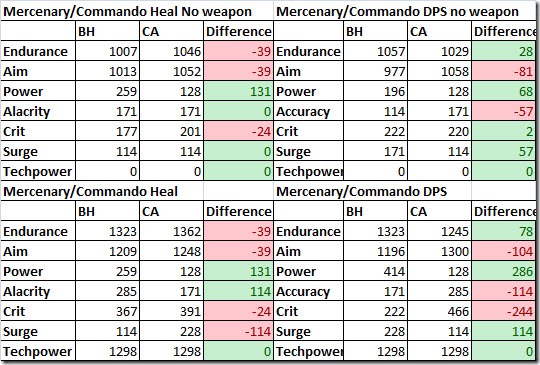 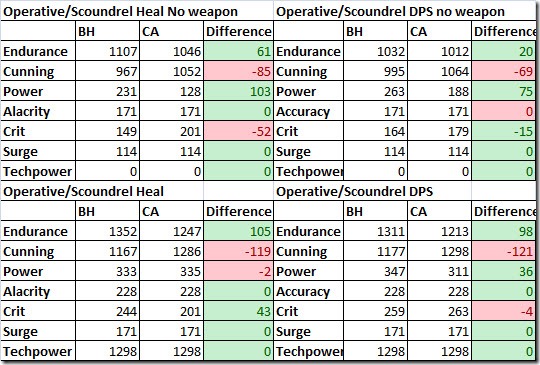 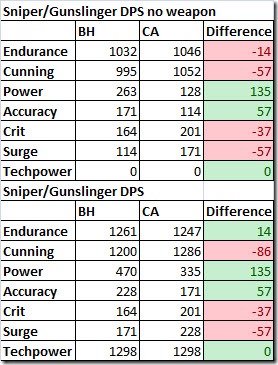 Based on the current tooltips, the BH gear does not have a set bonus applied, but the Campaign does.  Is this confirmed to be the way the sets will work?

Does anyone else see that the cybertechs are going to have to farm the BH comms to be able to buy all the equipment to RE the Armorings and Mods for these since we can’t RE armoring with a set bonus?

The tooltips reflect the situation currently in game – set bonuses don’t show for Black Hole stuff. However, this is likely a bug as it was mentioned in the patch notes that they “fixed” it. My guess is that the fix didnt go through somehow

Corrected an issue that could prevent stats and set bonuses from appearing on items purchased from Campaign and Black Hole vendors.

I think the Black Hole sets are not supposed to have set bonuses anyway. The patch notes mentioned the “items purchased from Campaign and Black Hole vendors.”, but there’s another line that says “The Crisis Point vendors are now labeled as “Campaign and Black Hole” vendors.” Since both sets are purchased from the same vendors, I believe they were just referring to the Campaign set bonuses.

So am I correct in seeing that story mode gear is the same item level as hardmode?

Does the Black Hole Gear have set bonuses?

Blackhole will not have set bonuses.

The Patch notes said BH gear would have set bonuses, not sure if the items have it on the PTR yet.

To Dulfy, you made typo with the Sorcerer gear, you called Force-Master a heal set and liste Force-Master under the heal section.

Am I seeing this right that the campaign set includes augment slots? That would be an amazing thing… and would not counter the crafters at all.

Just wanna say thanks! For the fast replies, and help in general. Love the site, keep up the good work! 😀

“For comparison purposes, ear/implants/relics were not included. Two comparison charts shown: one with weapons, one without weapons.”
Any chance we can get a sneak peak at the new ears/implants? 😀
Don’t know whether I should replace my rakatta ear with an augmented Columi I made, or just wait and buy the BH.
Quite the predicament, as you can see! :p

I kinda like the fact that both sets are equal ilvl but mixing and matching mods from both sets will be optimum. Eg. for JK tank the BH set has a tonne of Acc where the CA has zero.

So from the looks of this, it appears the only difference between Story mode and Hard mode EV will be that Hardmode directly drops 146 gear (though tokens) as opposed to needing to farm commendations from Story mode?

This is somewhat disappointing as people will probably want to mix Campaign and Black Hole gear mods for the best stat stack. I would hate to see people who can clear hard mode forced to run Story mode just to get the commendations for Black Hole gear.

Hey if that is the post you are refering to:
http://www.swtor.com/community/showthread.php?t=390271 about Hardmode dropping 4 Black Hole Comms per raid. He is probably right but we havn’t cleared any Hardmode bosses in Explosive Conflict so I can’t confirm that. What I have posted so far are my first hand findings.

It is still not known if Black Hole stuff won’t have set bonus or the just forgot to put it in.

What is the point of raiding Hardmode if the gear is the same as normal?

That is really good question and I have being wondering that. I am guessing it is because you can gear up faster in hardmode as it seems you only get enough Black Hole Comms per week to buy 1-2 piece of gear.

Cant you do both HM and normal each week?

Yes, they are on separate lockouts

Looking at the gear, it seems that the color crystal’s for the new weapons are orange? Is this just used as a filler? Because it seems like a downgrade from Black/Red nor does it seem like a very “Republic-like” color.

There was this in the patch notes which can explain the color: )

Maybe I missed it…but what does the FP Weekly quest give reward-wise? I believe in Patch Notes it said the new weekly was going to be Kaon and Lost Island…is it for NM or HM?

There is a new weekly specifically tailored toward the Rakghoul FP’s and there’s the other weekly HM FP quest that rewards the same amount of columi and tionese tokens as it did before. I can confirm for a fact that completing the new Rakghoul weekly rewards 8 Black Hole Commendations. Completing Story Mode EC last week, getting all the chests except the last one cause it bugged on us and downing all the bosses, plus doing the Corellia weekly and finishing the Rakghoul specific HM FP quest rewarded me with 38 BH Commendations. It would obviously be higher if that chest hadn’t bugged on us but you can easily get the cheapest stuff, like Implants and Earpieces, in just one week if you are able to complete everything above, except HM EC.

Hey Dulfy, great site!  Sorry if I missed this in an update, but have they added more than the Relics for new high end stuff you’re able to get with daily commendations, or are there no new equivalents to the Rakata gear you can currently buy from the mission support vendor in the latest build you’ve seen?

Just relics atm and some gear for your legacy alts. No other rakata level stuff 🙁

Thanks a lot for this post. A lot of interesting informations.
I’m still wondering about the lightsaber for the sorcerer healer :
Campaign Weaponmaster’s Lightsaber

Are you sure there is not another one. Because this one got strenght and no willpower at all.

Sorry forgot to correct the typo, will correct it today 🙂

where do i get for 50 black hole marks the “Black Hole Mender’s MK-1 Vibroknife” ? the vendor has nothing….

Seriously ?  this is rubbish ! .. Not ur info .. Thanks for your work .. I mean the stats as Assassin tank SUCK

Hey Dulfy!  Your site is my favorite for information like this.  Keep up the good work!  What server do you play on if you don’t mind me asking?

So where do the Black Hole weapons drop? Askmrobot seems to think the mk-1 is commendation bought… except the vendor doesn’t have them!

random drops in hm ec and from sm Kephas