Hey everyone! Patch 1.2 has finally made a lot of the endgame exotic crafting materials (Alien Data Cube, Biometric Crystal Alloy, Self-Perpetuating Power Cell and Rakata Energy Node) tradeable and also added an entirely new list  of crafting materials (Molecular Stabilizer, Synthetic Energy Matrix, Baradium Flux). What is neat is that you can also obtain these materials via methods other than raiding, like doing space missions!

I will give you a little overview of the old and new crafting materials and then jump into ways you can obtain them in 1.2! However, first I want to say thank you to Shoogli on the SWTOR forums who alerted me to this thread on the official forums, which I would have definitely overlooked otherwise and is the inspiration for this article.

You might be wondering what exactly is the use of these Grade 8 crafting mats. There isn’t a lot of information on the PTS right now as many people do not have access to the new gear let alone RE them for schematics. Based on some database crawls (which may not be accurate), it appears that the new Campaign/Black Hole PvE gear, if they can be crafted, will utilize these new mats. Here are is an example.

Here is a picture of the chest found in storymode Explosive conflict, which gave us 4 Black Hole Commendations and 1x Molecular Stabilizer + Synthetic Energy Matrix 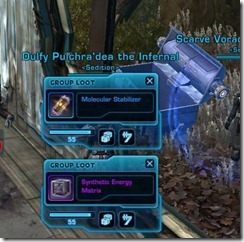 I do not know what Hardmode Explosive Conflict drops at the moment and therefore cannot comment on it yet. If you have defeated bosses in Hardmode and know what mats/schematics drops, please let me know and I will update it!

This is the big change that will allow even casual players to obtain operation level mats! The fleet commendations vendor (Starship upgrades) in the Galactic Trade Market now sells Grade  6, 7 and 8 crafting boxes for 50, 125 and 200 fleet commendations each! The Grade 7 and 8 boxes will reward you with the Grade 7 and 8 exotic crafting mats I described above! (I got 2x Synthetic Energy Matrix with the Grade 8 Material Box I opened).

These boxes will award random Grade 6 crafting mats, expertise color crystal schematics, and/or Mission Discoveries. This is probably more beneficial for the Artificers as they are the first crew skill profession to benefit from PvP Crafting with the expertise crystals. As someone with Biochem as Crew skill, the box I brought gave me 22 Mutagenic Paste, a Grade 6 Biochem mat. 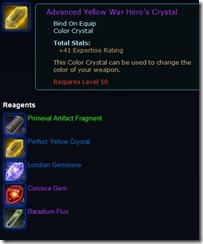 Lastly, all the endgame PvP armor (Battlemaster, Unrated War Hero, and Rated War Hero) can have their shell crafted for appearance and augment slots! 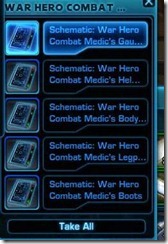 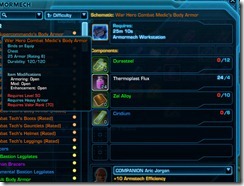 56 replies on “Endgame crafting mats and space missions in 1.2!”

What level do you have to be in order to purchase boxes?  Can I save Comms on my lvl 30-ish alts?

No level restriction as far as I know 🙂

At full Battle Master already, would you use your extra BM comms to purchase your alternate spec BM gear or hold off to purchase the Baradium Flux mats?

Just a quick editorial note – you have “All the Armsmech crafted stuff will require” instead of “Armormech”.

Thanks for the great info Dulfy.  Any idea whether or not the schematics that drop in current HM EV & KP will remain BoP or will they now be BoE?

Again a really nice guide. What would I do If I could not read your guides!? 😉
Do I have to be level 50 and rank 400 to craft the endgame gear?
Greetings from Germany

I’d like to know how armstech is affected, and if battlemaster, war hero weapons schematics are given

Not that I have seen 🙁

[…] Dulfy has posted something new and interesting that I think you’ll all be happy to read, a complete list of materials and the ways to obtain them in Legacy Update 1.2. Hey everyone! Patch 1.2 has finally made a lot of […]

Does anyone have any idea as to which of the boxes listed will yield Biometric Crystal Alloys?

I am guessing it is going to be the grade 7 box, give me 24 more hrs and I should know – just spent 200 fleet comms on the grade 8 box so need to grind more dailies for the 125 box

I am curious as to what all, if any, of these materials are currently BoE on the PTS.  If they will all be BoE then I can do space dailies on my main who is Biochem to feed mats to others to get stuff crafted.

All the mats are “BoE” – they don’t bind, you can freely trade them on the GTN/alts/friends etc 🙂

Hey Dulfy! really nice guide, thanks alot for the work you do informing us of upcoming changes in 1.2 !
Do you know what materials are needed to craft armoring, mods (cybertech) and enhancements (artifice) that were learned trough reverse engineering from endgame items? e.g. do I need alien data cubes/rakata enegy cells to craft an enhancement I learned after reverse engineering an enhancement I took out of a columni or rakata set item? Thanks alot and greetings from Germany

I am guessing you are going to need grade 7 mats for the columi/rakata stuff, I will ask some people around but the cybertech in my guild said he has not gotten any schematics from REing the mods in the rakata gear 🙁

Do you know if he was able to RE the mods without removing them from the armoring, or if he had to pay to pull them out first?

Slightly Off-Topic, but do you know if Sythweavers (or another crafter) have the ability to take players existing Orange Gear and Add an Augment Slot to it?

I remember reading from Dev’s they may or may not have this implemented for 1.2.

Have not seen this on the PTS so I am guessing it is not in for 1.2

I read a Dev comment somewhere saying in 1.3 or later there will be options to add augments to any gear (orange, epic) that don’t recommend a specific crew skill.

Hey Dulfy, the last time I was on the PTR, maybe 2-3 days ago, I thought I saw that the crafted Battlemaster and War Hero shells were BoP, leading me to level Synthweaving on my marauder. Have they changed it since then? When did you check the PTR when these screenshots were taken?

They were BoP but now they are all BoE. It was changed in the april 4th patch and a dev also confirmed it on the swtor forums
http://www.swtor.com/community/showthread.php?p=3737089#edit3737089

Those armor shells aren’t for Armstech (which makes guns), they’re for Armormech.

I think I already know the answer, but I prefer to be sure, is the Rakata gear still BoP ?
Thanks in advance
Greetings

Can you get other classes PVP sets (assassin set as juggernaut) or just the class you are currently a Synthweave with?

Ya you can buy the orange shell schematics for other classes. They are tradeable anyways and the stuff you crafted is all BoE 🙂

So the schematics are trade-able? Sweet!

One more question? Can you use the crafted item for the required piece needed to get the war hero piece (ex: crafted BM boots for vendor WH boots)? Thanks again!!

You know that is a really really interesting question. I don’t have enough ranked wz comms for a war hero piece but ya if it works damn lol! I will see what I can find out 😉

I read that you can research end level relics. Do you have anyone with a relic and artiface who can use the tooltip to determine research chance? Thanks

[…] you who are eagerly awaiting what patch 1.2 will bring to crafting the folks over at duffy.net have a great rundown here, which includes some information on space combat reward changes as […]

Will the grade 7 crafting material box drop the Biometric Crystal Alloy?  This is huge to me on a low population server where getting an OP, or HM FP group going is hard to do.  (we usually have 5-12 people on fleet).  I noticed the box is purple whereas the alloy is blue…

Just confirmed, it does – received 3!

Can you get Biometric Crystal Alloy from the Crafting Boxes from space missions?

Update on 1.2: They added artifice schematics for empty orange shell lightsabers with decent material cost accessable trough treasure hunting missions. Crafted 2/5 one-handed lightsabers t and 1/1 dual wield lightsaber (the old one: Zenz-Kai-Ell) with augment slot as Inquisitor (no +crit artifice companions, 10000/10000 affection). Haven’t tested synthweaving augment crafting bye now due to low companion affection. REed about 20 low lvl orange oder epic items with modification slots but so far not one proc to learn a schematic. I assume it will only work with the new T2 gear. Haven’t found any schematics for Bracers, Belts, Hands and Boots (exept for the new PvP ones). Since RE orange/epic items seems not to get you schematics I assume there ain’t no way of getting any. In total I think you can get 4 augmented orange items (Head, Chest, Legs and MH Weapon) witch are all tradeable before clearing Denova HM. Anyone has any more data on that?

also have RE about 5 enhacments of tionese and columi-gear but no proc so far. Quite frustrating!

What do you have to RE to get the schematics for the BiS gear that uses these mats though?

Can you RE the Rakata implants from the Daily Com. vendors for 120?  I’d hate to buy one only to not be able to RE it.

You can RE it yes but you probably won’t get anything from it as it doesn’t show the the 20% chance to get a schematic out of it.

After getting the Black Hole implants (those can be RE’ed to learn to a schematic), I was tempted to RE my old rakata sets but I was disappointed that you can’t get a schematic from it.

Howdy Dulfy…Great guide…Thanks a bunch for your hard work and effort you put into these guides…just a couple of questions…I am having a hard time finding out where can you get end game schematics from…for example, artifice–according to torhead has 1,711 schematics, where a bunch of schematics are BoE purples…I just hit artifice 400 ( I’m lvl 41 at the moment) and can the only make the rakata relics…but according to torhead…there are a bunch more BoE relics (i.e. Denova Relic of Elemental Transcendence) and a whole bunch of other BoE purples, that I can make…but just don’t know where to get schematic from…of course, schematics drop from ops and such…but anywhere else? World Bosses, FP, etc…?

Does anyone know how i am able to find Advance Acute Enhancement 31 schematics??
Thank you for the help.