Hey everyone, Lost Island is a new flashpoint introduced with patch 1.2 that continues the story of Kaon Under Siege in patch 1.1. This flashpoint is a bit more difficult than previous flashpoints but the rewards are well worth it (Rakata chest off the last boss in hardmode and one of the bosses drop a rakghoul vanity pet).

Note: The following guide will also be applicable to normal mode Lost Island. The damage are lower on normal mode but the mechanics are identical.

Mini boss, come with 3 normal adds that can be easy killed. Has 112 k HP on hardmode.

Has one main tactic: avoid the yellow reticles on the ground. They tick for 200-300 damage per second.

This boss also hits the tank pretty hard so healers need to be quick to react.

You will know where the yellow circles will spawn as the ground will be deformed like something is about to pop out. 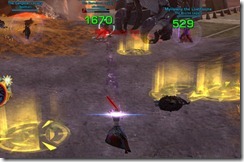 This is the first real boss in this flashpoint and is one of the hardest bosses. The key here is using interrupts/cleanses and moving out of the lighting balls on the ground.

Also something to note that this is not an exactly conal damage as this is a missile type attack that is launched towards the tank/highest threat. DPS should not be standing beside the tank or they will also receive damage from this attack. In the picture below, you can see that the tank is trying to grab the adds near me (healer), this was a mistake as the boss launched incinerate towards the tank and caused both me and tank to receive 1 stack of the Burning debuff. 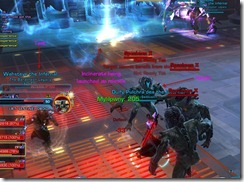 In addition to the abilities from the boss, there are several sources of damage from the environment as well. 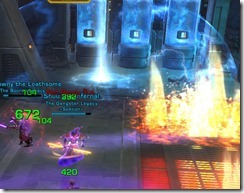 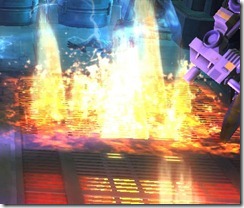 The strategy we used to successfully kill off this boss is basically fight on the edge of the room and move in a counter/clockwise fashion around the room everytime an energy coil is dropped on someone. DPS/tank should focus on interrupting every Incinerate and as many Plasma Arc as possible (The healer may have his/her hands full to do interrupt but should help whenever possible).

It is not an easy fight but definitely doable if you keep your interrupts up and people move away from Energy Coil/Lava grates like they are supposed to.

Here is a video of our fight, group composition was Jugg Tank, Marauder & Assassin DPS, and Sorc healer.

This is another mini-boss, he has two abilites: Horn Slam and Improved roar. Improved Roar can be interrupted but Horn Slam cannot (the Unshakeable buff comes on when he is doing Horn Slam).

He also likes to drop threat and head butt (this head butt is not Horn Slam) into a DPS/healer if not taunted back. This head butt does quite a bit of damage and knock the person on the ground. You get a yellow reticle on you when this happens. 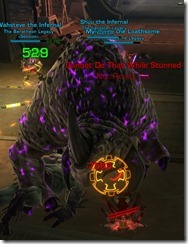 This is the 2nd real boss in this flashpoint and fairly easy fight if you are aware of the mechanics. This little monster has two main things: a big smash and pillar jumping.

Sav-Rak Smash is an ability he has that is essentially a massive knockback that will knock you into the lava below unless you stack right on top of him when he is channeling that spell (you will get knocked up vertically). Tank should be tanking the boss near the middle if possible to give people some room during the knockback. Sav-Rak has a small headbutt so you should never tank him near the edge!

You will get a nice warning in the form of red text on your screen when he does that. It will say: Project Sav-Rak prepares to Sav-Rak SMASH!

You really need to stack on top of him, like literally in the mob’s model. To give you an idea, these two images should help. Mylilpwny here got knocked to the lava below and died because he wasn’t stacking under inside the mob (even though he was close). Shuu almost got knocked into the Lava. Both me and Wahsteve here landed not too far from the boss. The smash itself deals around 1.6-1.8k damage. 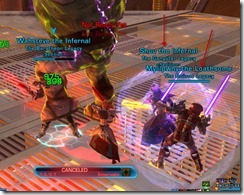 Pillar Jumping: Shortly after everyone lands on the ground from that knockback, Sav-Rak will jump on one of the pillars and start throwing down green crap at everyone else below. You will also get a red text on screen: Prokect Sav-Rak jumps onto a pipe! One person (not healer) will need to go to the pillar Sav-Rak is standing on top of and click on the button below (it is a 9 second cast and you need to be literally next to the button to click it). Healer will need to keep healing during this phase. (It is possible that Sav-Rak might jump to another pillar if you are not quick. Therefore it might be better to have everyone but the healer run to a console and click).

The green crap (it is actually called Acid Spit) thrown out by Sav-Rak hits for 3k and leaves a DoT on you that ticks for 950 damage per tick. This DoT will also spread to nearby group members. For this phase, I find it easiest to heal if everyone but the person clicking on console stack on me. This will allow me to drop a bubble heal on the ground. 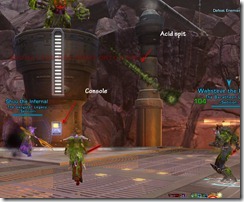 Here is a video of our encounter with the boss.

This is the bonus boss that can be only activated if you listen to all the holo-recordings along the way. He is also fairly easy if you are aware of the mechanics.

He really only has two key mechanics: 1) Deals a lot of damage to the tank and 2) Icicle Smash

Icicle Smash is a phase that starts with Frostbite debuff, which deals 3.8k damage instantly to everyone in the group. Next, you will get a red text on the screen: Transgenic Sample Eleven Smashes the Facility Floor. Start moving!

During this phase, you need to keep moving by running in wide circles, you will get the stacking ticks of Frostbite debuff but they won’t damage you other than making you move slower with every tick. Use your instant casts in this phase but don’t ever stop to do damage/heal.

There are icicles dropped on the ground which follows you, if you stop moving, they will be dropped onto you and each icicle hits for 6.8k damage. As long you keep moving during that phase, it is an easy fight. 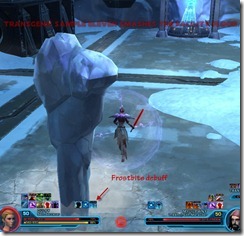 This phase is probably the most diffcult phase, the key here is to stay alive at all costs and don’t worry about DPS. He follows a fixed pattern during this phase: He will throw yellow circles on the ground that turns red right away and you will need to move immediately. Lorrick will throw green virus vials that turns these circles into acid clouds and damage anyone hit by the initial splash. If you don’t move out before they turn into acid cloud, you will receive 2.6k damage instantly. If you keep standing in these acid clouds (they remain on the ground for quite a while), you will get stacks of Rakghoul Virus which hits for 95 damage every 3 seconds per stack. Luckily, the Rakghoul Virus can be purged/cleansed. 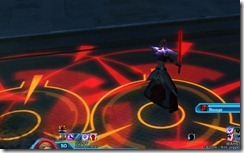 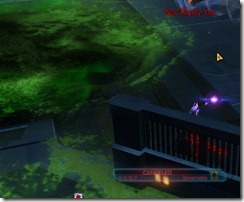 He will do these circles two times, and then perform his Sachel Charge move. This move is indicated by the text I have a few tricks up my sleeve! (There is an audio cue but sometimes it is bugged and won’t appear)

Sachel Charge is deadly, Lorrick must be turned away from rest of the group and tank will need to learn how to sidestep to prevent massive incoming damage. He will throw out Sachel charges three times before he will go stealth and activate a Kolto tank. To avoid DPS getting hit by this Sachel charge, they must avoid the direction that Lorrick is facing. Honestly, DPS should be running to the next Kolto tank at this time and let the tank handle the Sachel Charges. 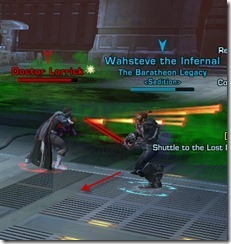 Each Sachel Charge hits for 7.7 k on a light armor user and around 4.8k on a tank. You can get 3-4 Sachel charges on yourself if you are not careful. That is usually a certain death on a non-tank person. Luckily, these Sachel charges don’t all blow up at once so you have just a bit of time to heal the person up before the next Sachel charge explodes. 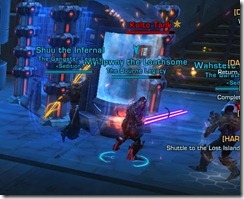 The Kolto tanks are broken in a counter-clockwise fashion, starting with the Kolto tank immediately ahead of Doctor Lorrick when you first engage him and ends with the Kolto Tank right next to him. This allow your DPS to know where to move to damage the next Kolto tank. The mobs that spawn from these Kolto tanks gets increasingly difficult and changes from strong mob to champion mob as you progress. 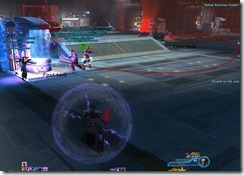 There are 4 Kolto tanks on the left as you enter the room and 2 Kolto tanks on the right. Not all 6 Kolto tanks have to be broken, if you DPS Lorrick low enough (<40%), he will stop breaking the Kolto tanks and do his next set of moves. Lorrick will stop using the acid cloud and sachel charge abilities and release two Burning Rakghouls at a time. These guys are super slow moving and can be avoided/pushed away if need. All the DPS should be focused on DPSing Lorrick down so he starts the next phase and stop spawning the burning Rakghouls. 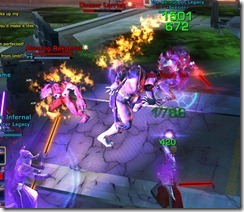 Once you get Lorrick to 10%, he will start to regenerate his health and all the Burning Rakghouls that spawned will die.

This phase is pretty much a soft enrage, essentially a DPS race to kill Lorrick before he kills you.

There is no reason to DPS Lorrick once he starts to regen HP, everyone should run out to the door and get topped off by the healer. Lorrick will do a knockback once he finish the transformation to Rakghoul.

Rakghoul Lorrick also have a powerful knockback and tank should position him on the door to which you enter the room so you get pushed back to the door instead. 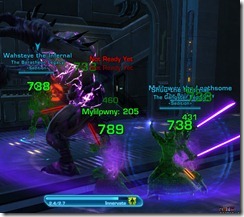 Everyone will get a stacking debuff called Corrosive Smash, which essentially is a DoT with an initial instant damage component. This cannot be purged/cleansed and you will get increasing stacks of it as you fight the Rakghoul form of Lorrick. You get 1 stack every 7 seconds when he spew out an acid cloud, which also deals the instant damage. 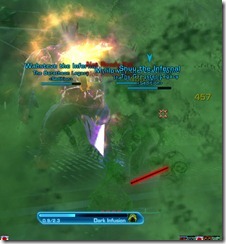 Everyone should be grouped up so the healer can drop AoE heals to counter the damage. Eventually, the healer will be overwhelmed and it comes down to killing Lorrick before he kills you.