Hey everyone, most of you are probably well informed of this event by now, but for those who are just doing it for a first time, this is a good starting place! The Rakghoul Pandemic a new dynamic event that started on April 15 on the planet of Tatooine. It involves a series of time limited quests about the Rakghoul plague! The rewards you obtain from this event are a title (Containment Officer prefix), 9 Codex entries, 2 Rakghoul vanity pets (Pale and Crimson) a full set of Containment Officer armor set (light armor), special Black Green color crystal, and infected Companion customizations!

This event is not restricted to 50s only. All of the quest mobs do scale to your level but beware that if you are too low to enter Tatooine, you might have a bit trouble with the local residents.

You might need to wait a day to pick up the new dailies if you did not do the dailies since day 1 of the event.

April 18 – New Daily – Pure Virus Sample, picked up in the same location as the Wreck of the Stardream in Dune Sea when you click on a Shipping Manifest.

April 19 – New Daily – Newly Infected, picked up in the same location as [AREA DAILY] Outbreak on a datapad. 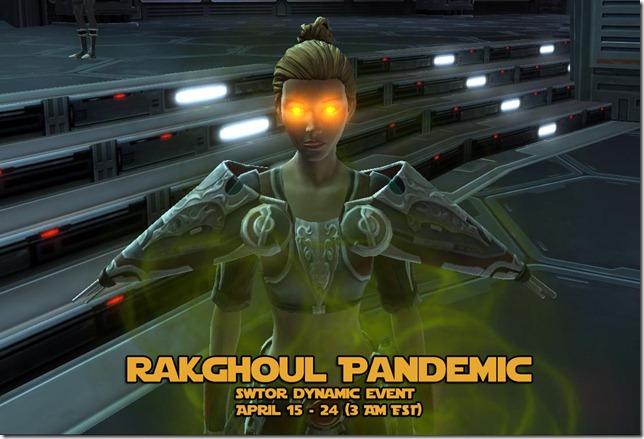 [DAILY] Newly Infected – Picked up in the same location as [AREA DAILY] Outbreak on a datapad found on the ground. Will ask you to click on Infected Dewbacks in the area west of Outpost Largona. Rewards are 7175 credits, 2x Rakghoul DNA Sample, and a choice of 1x Rakghoul DNA Sample, Containment Officer Chestpiece, or Belt.

[DAILY AREA] – Wreck of the Stardream

To start off all the dailies, you need to head to this location in Dune Sea (Outpost Zaroshe is the closest speeder/Quick travel point for Imperials and Outpost Thorazan for the Republic). Doing these dailies for the first time will reward you with Codex entry 1-4 for the Rakghoul Pandemic event. 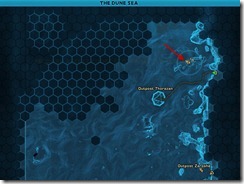 Upon entering the area, you will be given a 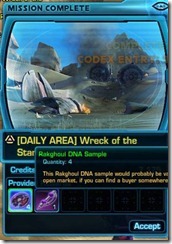 Killing any Rakghouls in the area will give you 3x Blood Samples, which starts up 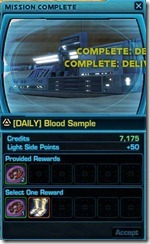 As of April 16, there is a new daily that can be picked up also in the same location as the Wreck of the Stardream 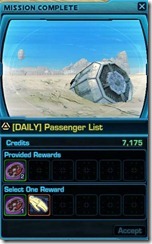 As of April 18, there is a new daily that can be picked up in the same location as the Wreck of the Stardream 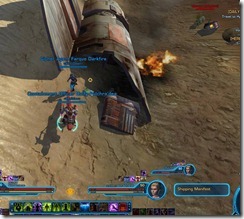 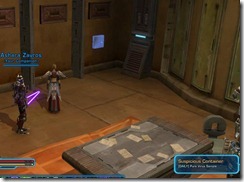 Doing Blood Sample daily will lead you to the next area for the event in Jundland, 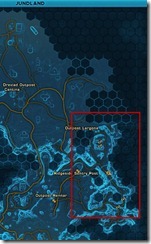 Where you can obtain 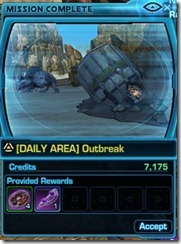 As of April 17, there is a new daily that can be picked up in the same area as Outbreak/Blood Sample 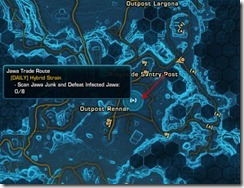 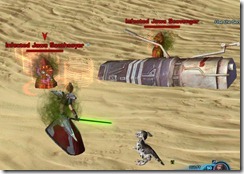 As of April 19, there is a new daily that can be picked up also in the area of Outbreak/Blood Sample. 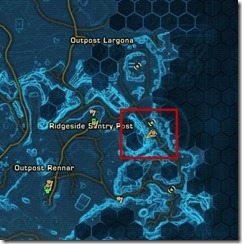 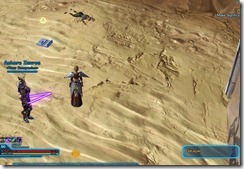 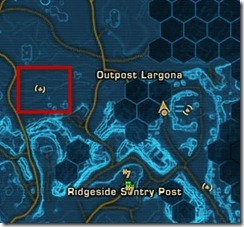 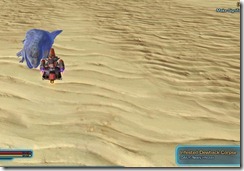 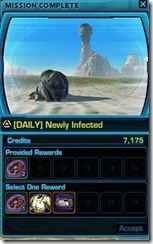 Lastly, if you get infected with the Rakghoul virus (via either killing Rakghouls/infected NPCs or standing next to someone that blew up) and blow up while infecting other people nearby, you can get this quest 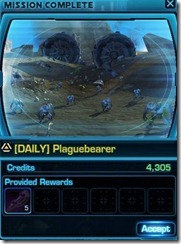 This is a quest/scavenger hunt that will grant you Codex entry 5 and a Crimson Rakghoul pet! You need to head to the Empire/Republic main city on Tatooine (Mos Ila for Empire, Anchorhead for Republic) to start off this quest.

Basically, you need to grab 3 items within the city, each item will give you a 10 minute buff. Once you have all 3 buffs, it will be converted to a 1 hr long buff that allow you to pick up the quest Tracking the Origins from the terminal near the speeder/Taxi. Note that you do not need the buff to do the quest, just for picking up the quest so don’t worry if you need to take more than an hr to collect all 12 fragments.

This quest is fairly long and requires traveling all over Jundland and Dune Sea to find 12 starship fragments. I wrote a fairly detailed walkthrough which you can read about here.

Rewards you with this! 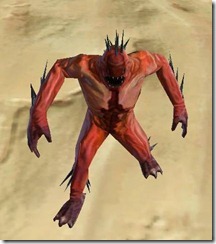 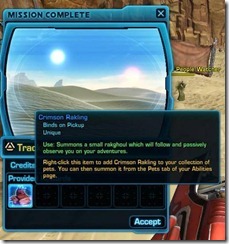 Killing each of these three world bosses on Tatooine will grant you with 1 Codex entry each, giving you Codex entries 6-8 for the event. There is a writeup on the world bosses here. 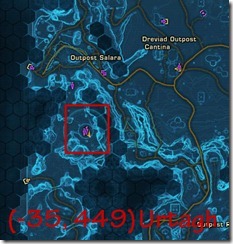 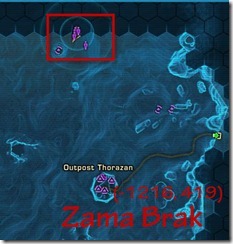 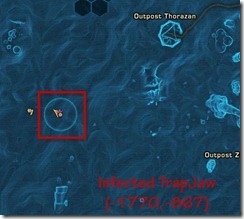 Rakghoul DNA Sample and their rewards

Rakghoul DNA samples are obtained from doing the dailies (8 from the Area Dailies and 4-6 from the two dailies so far) and also via dying with the Rakghoul virus. Everytime you die due to the virus, you gain 5 Rakghoul DNA in your inventory. You do not take any durability loss on your armor when you die this way.

Dying with the Rakghoul virus is therefore the fastest and easiest way to get those Rakghoul DNA samples. You just have to find a spot on the fleet where everyone clump together in a pile to get infected. If you want to die faster, you can jump off or find some other ways to kill yourself when the Rakghoul virus is in the Feverish stage. This method can get you 5 DNA sample every 10 minutes. 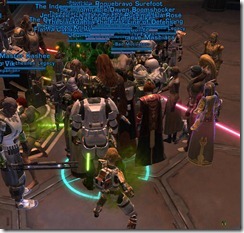 There is a Jawa vendor (Jeelvic) located in the NE corner of Dune Sea that will exchange your Rakghoul DNA samples for rewards. 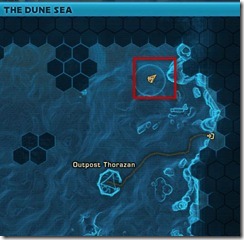 The stuff you can buy are mainly color crystals, infected Companion Customization and Pale Rakling.

Infected Companion Lockbox will contain one of the 8 Companion customizations. Which one you get is random and the customizations are Bind to Legacy. So if you say buy 4 boxes, you can get unlucky and get 4x Infected Andronikos customization even if you are not an inquisitor. 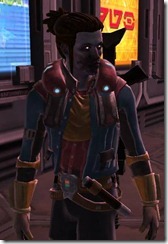 The Black-Green color crystal looks like this, fluorescent green, which is kinda cool! 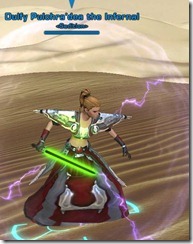 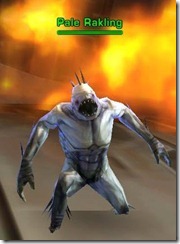 There are 9 codex entries so far for the event

1. The Final Flight of the Stardream

5. Origins of the Outbreak

The outfit are part of quest rewards associated with [DAILY] quests. These daily quests don’t disappear when a new one is coming out so there is no rush! 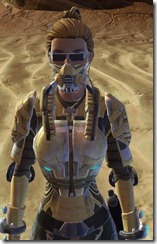