Companion Gifts and Crafting bonuses for 1.2

Hey everyone, with patch 1.2, you can finally gain affection with your annoying ship droid and make him get better at certain crafting skills. I thought this would be a good time to update all the previous companion gift information and add in all the crafting bonuses in one page. All of the data here directly came from the client files and therefore should be fairly accurate unless I made a typo.

Why gain affection? Max affection with a companion will grant you a 5% crit chance to all crafting done by that companion and 15% efficiency (faster crafting). After 1.2, max affection will also unlock stat bonuses for the first companion of each type (i.e. melee tank, ranged dps) to be unlocked and a small presence boost (+10 presence, stacks with other companions, even if they are the same type)

The stats bonus are permanent and works even when your companion isn’t out and in operations.

Crafting crit chance and affection: Maxing out a companion will grant 5% crit chance to crafting, this is in addition (and additive) to the baseline crit chance that is received when crafting items of different difficulties and also whatever crafting bonus that companion might already possess.

For example, if you are using companion X with maxed out affection and with a baseline 2% crit chance to Underworld Trading to do an orange Underworld Trading Mission, the chance for this mission to crit would be 10% + 2% + 5% = 17%.  (source, thanks to Johnston Cheng for point it out!) 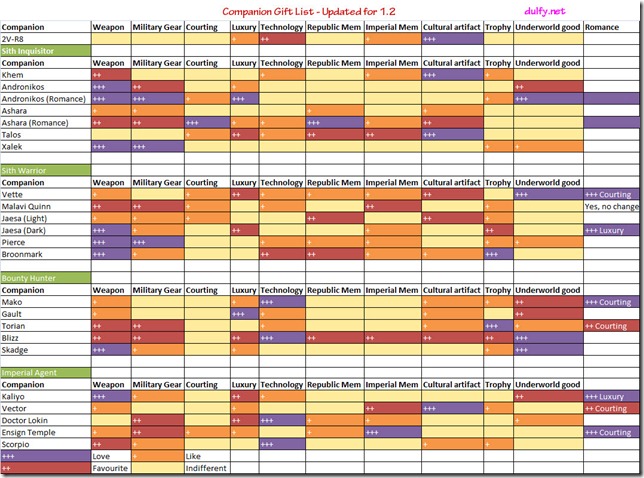 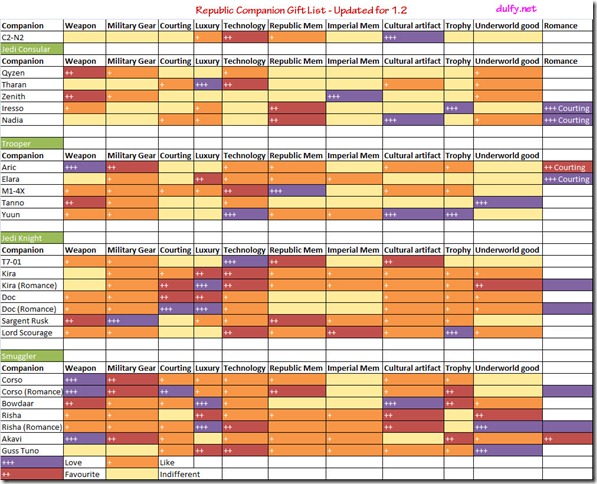 Knowing the above info and the type & rank of the gift you have, you can figure out exactly how much affection you companion will gain from a certain gift, I will show you how to calculate it below but here is a handy chart if you don’t want to do the math yourself!

There are 5 companion affection rating ranks

There are also 5 ranks of Companion gifts, depending on the rank difference (Companion affection rating rank – Companion gift rank), here are the modifiers. (i.e. A companion at rank 1 affection getting a rank 2 gift would have a modifier of 1.1)

Each companion have 4 affection ratings towards various gifts, each with a modifier

Finally, there are 3 tiers of Companion gifts, each with another modifier.

Knowing all these information, you can quickly calculate how much a certain gift will give your companion.

For example, your ship droid 2RV8, if you have him at affection rating rank 1, and gave him a green rank 1 Technology gift the resulting affection would be 6 x 1 x 9 = 54.

Conversations for your companions are unlocked at specific affection ratings. Here is a list of all the conversations available to each companion and when you can unlock them. 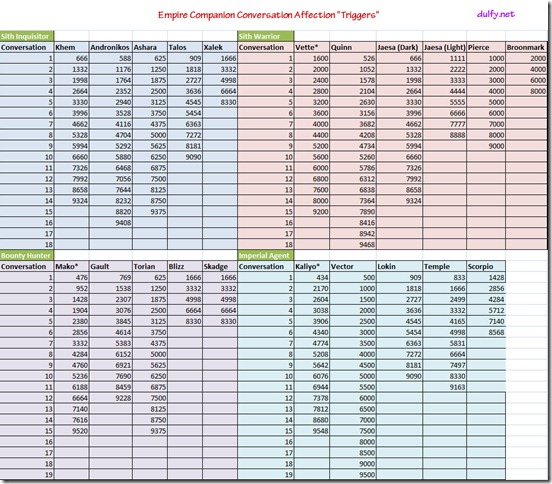 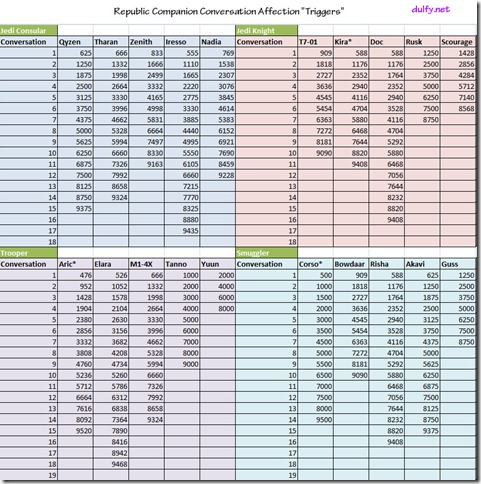 Companion names marked with * may have additional romance conversation triggers

Companions have two bonuses, one is efficiency (reduce the amount of time it takes to make the item/gather) and the other is critical (chance to get augment slots on crafted gear or yield more items etc). Each companion has an efficiency bonus to one crew skill and a critical bonus to another crew skill.

Lets talk about the Ship Droid (2V-R8/C2-N2)first because he is special!

Your ship droid has a sensor unit, which can be equipped with parts brought from the Repair Droid (Legacy Perk unlocked for 1 million credits). Something good to know is that if you know a friend that also brought the Repair Droid for their ship, you can simply access their ship to buy the parts without spending the 1 million!

Repair Droid sells the following 6 parts, each costing 100k. You can equip 1 sensor on your droid at a time.