With 1.2, hardmode flashpoints no longer have a daily lockout and people running them are most likely going for the Columi drops at the last boss. Therefore, I will show you what bosses can be skipped and cover the strategies for the bosses that can’t be skipped.

Taral V is the Republic Equivalent of Boarding Party. It is much easier than Boarding Party and a ton of bosses/trashes can be skipped along the way, making this flashpoint a fairly quick one.

Boss Skipping: The bosses that can be skipped in this flashpoint are

Taral V (T5) is designed in a way that allows one to skip quite a lot of trash in the beginning if you hug the left wall of of the little road that leads from the shuttle. 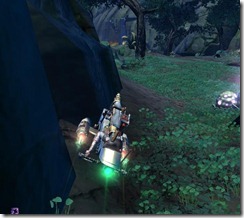 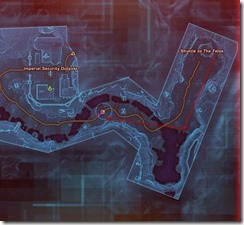 Once you arrived at the lake, you will need to go across following the burning pipe and keep hugging the left wall. You may need to kill a few beasts that pop from the ground but the majority of the trash, including the first mini boss Handler Gattan, can be skipped this way. 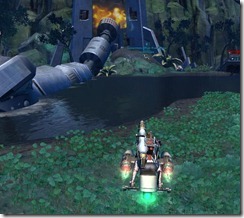 Before reaching the compound, you will need to switch to hugging the right wall and go up the hill, this will lead you to the first actual boss you have to kill – Captain Shivanek.

Handler Gattan (can be skipped)

Miniboss that can be easily skipped. Handler Gattan comes with two vinecat adds, which can’t be really taunted and have really good damage reduction (both boss and the adds have about 150k health).

The group should spread out and burn Gattan down first as he have a mortar volley attack that deals about 6k AoE damage to players with aggro that are not in the melee range (for this reason, ranged DPS should wait for tank to gain threat before unloading).

The two vinecats do not hurt much – deals around on average 100-200 damage per melee attack, around 1k when they leap to you. They do have quite thick hides so it takes longer to burn them down than Gattan.

This is the first actual boss you have to kill in this flashpoint. He drops a relic (usually tanking relic). He is a very easy boss that comes with a champion add but has no additional mechanics.

Immediately when you engage Shivanek, Ripper, a champion add (Ripper) will pop from the left. 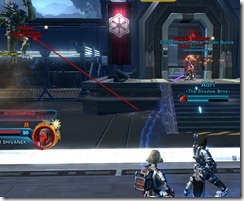 The overall idea of this fight is to kill both the boss and at the add at the same time as killing one before the other will cause the remaining one to “enrage” for the next 20 seconds. However, the enrage (extra 300% damage) doesn’t really hurt that much and you can easily tank the enraged mob without much difficulty.

The recommend route is to DPS one mob down to a low %, then DPS the other mob to the same low % and finally finish both off at around the same time.

However, you can easily kill Ripper off first (has low defense) and then finish Shivanek off.  Shivanek does have a small AoE he launches to random party members and a conal so don’t stand in front of him and don’t stack too close to each other or you will risk splash damage.

Essentially a tank and spank fight with an add, couldn’t get any easier!

This is a bonus boss that can be unlocked if you do the multi-stage bonus within the flashpoint (Jungle Infiltration).

Despite being a bonus boss, Hasper is quite tough and can quickly decimate unprepared groups.

If you group is geared enough, you can simply allow yourselves to be pulled in by Force Storm and then just run out. However, if you are undergeared, the following Line of Sight (LOS) trick might work.

The pattern of Hasper’s cast is 3x Force Lighting followed by Force Storm with random Shock thrown in. Knowing this, you can predict when Force Storm is coming and get out of LOS. 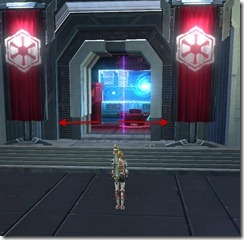 Doing it this way, you can essentially avoid damage from Force Storm on everyone but the tank. You will still need to heal through the random Shock Hasper throws out but it won’t be as difficult.

PD-44 is a droid that stands in front of a gate guarding your path to the final boss. He can be skipped if you hug the right wall very closely but someone tend to always aggro him so you may need to fight him if that happens (he drops Energized Boots).

PD-44 has the following abilities: 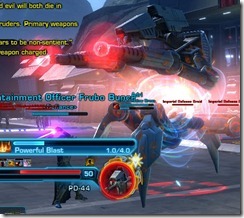 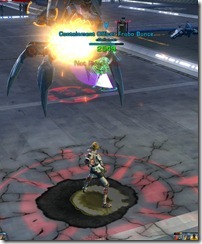 At around 21%, PD-44 will gain a buff called Very Damaged. I did not notice anything different during this phase but it is best to kill him ASAP!

Compared to Captain Shivanek, PD-44 is a bit more heal intensive due to the Bombardment and Missile blast but nothing too difficult to handle.

General Edikar is the last boss and the toughest boss in the flashpoint. However, there is a simple LOS trick that will make this fight much easier.

He comes with 4 Experimental Defense Turrets, 2 on each side. If you did the bonus boss, you can disable 2 of the turrets. With the strategy used here, you wont have to worry about the turrets! 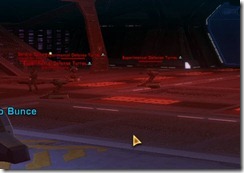 The trick with this fight is to have everyone stand behind this pillar thingie near the entrance of the room and then have the tank pull Edikar. This will LoS Edikar and cause him to run to you; this way, the turrets won’t be bothering you. 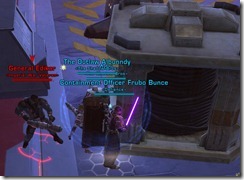 However, doing it this way in such an enclosed space carries its risks – tank must turn him away from the group and DPS must try not to pull aggro or risk the entire group to eat his nasty conal.

Edikar has the following abilities

Hail of Bolts + Thermal Grenade can quickly kill someone unless the healer react fast enough. Just make sure that the tank turns him and the DPS don’t pull aggro – this will make this fight go much easier!

After you kill the boss, you can then go and finish off the 4 turrets!

I have however severel advices for your guide about the Taral HM.

You can still lose LOS of Edikar by hiding outside the room. Patch 1.2 has fixed that bug that Edikar can run out of the room. Its still possible however to hide outside the room.
With some good timing, the tank can pin him down just before he leaves the room.

The difference with your tactic is that this way it is way easier to lose LOS of the adds.

When Edikar is at around 10-15% health people should ignore the adds and burn him down.

The adds will come more often then two times you suggest and aren’t percentage-bound. Normally my group has 3 waves. When the groupgear/skills are lower its possible to have even more waves. (In a bad situation the next wave of adds will come before the 4th add is even down)

Excellent, thanks for the info. Everyone in the group just assumed it wasn’t possible hehe 🙂

When we were undergeared and first trying it, we would run him way back a few rooms through the instance.  In this way we killed him just before enraging, and before the first of the 2 waves of adds turned up.

However 1.2 has now stopped him leaving the room but you can lure him to the door.

Jupz. Its still possible to lure him.

By the way.
You forgot to mention the Doctor boss with the raghouls between Captain Shivanek and Lord Hasper/PD-44 (Sry forgot his name 🙁 )

This bonusboss is very easy to kill (even when undergeared) The loot is also 1 tionese crystal.

Oh yes I left him out for some reason, I will add it in soonish 🙂

With 1.3 they added a bunch of trash you can’t go around after the spider boss that you can still go around.

I got this as yesterday’s Group Finder hardmode, and there were no trash between PD-44 and the Console that people have to interact with, and the rest of the group wanted a fast run, so we skipped him. I still need my Exotech Chest…. 🙁

As of 1.3 Lord Hasper’s pull now seems to yank in people that were hiding around corners, so there’s even less reason to fight him on Hard Mode.