Hey everyone, PTS 1.3 Update 1 just arrived and here are some important changes that you might want to beware of. 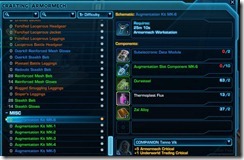 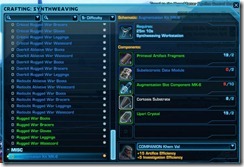 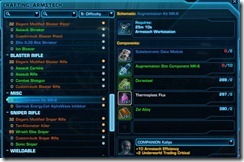 PvP relics (Champion, Battlemaster, and War Hero) now have all on-use abilities removed and got a stat increase instead. PvE relics (Columi, Campaign etc) are unchanged. 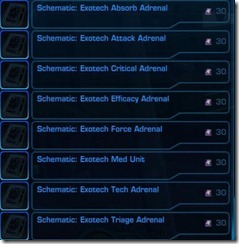 Exotech Stim schematics can now be purchased from Black Hole/Campaign gear vendors on the fleet for 20 Black Hole comms. The schematics are BoP and cannot be traded. 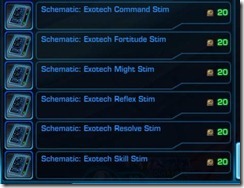 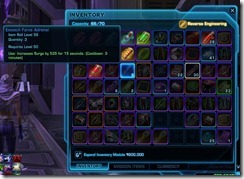 Stims are on the black hole gear vendors. 20 commendations.

It is the same matrix cube, just got stats upgraded

can the matrix cubes be augmented?

I had trouble recently adding augment slot to my matrix cube. I could put it on the augmentation table, then select MK 6 augment kit, but upon cliciking assemble (or sy) it did nothing, nothing happened. (Had mats/augment kit/ credit for it).

Was it a bug, or you can only put some lower augment kit on it?

Waiting for your reply.

bug, see this guy augmented his matrix cube and put in the highest augment into it
http://i.imgur.com/bQuO3.jpg

That picture was taken before the ‘artification’ of the matrix cube, as its blue quality, so its older.

Wait a minute, are they putting purple grade material requirements on the basic Biochem schematics?
Do the developers even have an inkling of how much time and effort it takes to get one item’s worth?

These exotech are the highest tier of adrenals/stims and the mats havn’t really changed. Still the same as pre 1.3

Ah. Well, my Biochem isn’t at 50 yet, so I really wouldn’t know better.

All I know is that he has the worst luck with purple grade materials. Ever.

So why would you really need Underworld Trading now?
You need Slicing for the kits AND for the augments… you don’t really need to craft armor… not the ones that require metals and fabric anyways…
If you got your augment schematics you’re kinda done with the Underworld Trading… unless you care really really bad about getting orange gloves and boots outside of Social or Inherritance gear…

im also thinkin that too ummm but lvling mission crew skill is always a pain in the ASS!!

Dulfy, you are my source for information.  Thanks for all that you do!  Keep it up.

Thank you very much, as always.  Can you pls add the missing new WH crit relic?  There are 4 WH options whereas I think there should be a 5th for Crit/Surge

There isn’t actually a crit relic at the WH level.

Thanks for the info, Dulfy. Do you know whether campaign relics have been changed as well? I’m especially curious to know whether the campaign power relic is still on-use or has been shifted to a passive power buff. I’d check myself but my anti-virus is waging war with the PTS patcher at the moment. Thanks.

campaign relics are still on-use, I checked it before I posted this article 🙂

Thanks, Dulfy. Keep up the excellent work! I love your site.

Has anyone found any info in regard to the items that are RE’d for the MK components, if they need to be made after 1.3 hits or can you pre-craft them to be ready to RE once 1.3 hits?

I was wondering this myself.

hey, I just tested this on the PTS. My armormech had some stuff crafted before patch 1.2, she RE’ed them and got components back so pre-crafted items should work fine 🙂

Do you get the components out of re-ing green implants crafted by biochems?

So the new stims/adrenals require radioactive paste and are consumables?  Dang that’s gonna get expensive.  Can you use those adrenals in PVP?

in regards to to the matrix cubes….  does this mean we go and disassemble the one we have now and re assemble it and get the upgraded one?  or is there a different process?

no its automatic, when 1.3 lands all your old ones will be converted to new

I think its an bug that you cannot RE the stims, cause right now I cannot even RE any tionese, columni, rakata armor aswell and that works fine on live server. I think update 1 on pts broke a lot things.

Hey dulfy, this question just hit me. We know that in 1.3 we have to RE crafted gear for aug kit pieces, 10 pieces = 1 kit.  However, does it have to be our own? Because I have a BH that was Armormech and made some War Hero pieces that did not crit. He is know Biochem, so i was wondering if i rolled another toon for Armormech would I be able to RE these orange gear for aug kit pieces?

hey just tested it for you on the PTS, I brought an orange gear crafted by someone else from the GTN , RE’ed it on my synthweaver and got a component back, hope that helps!

just tested it, its true, I got a MK-1 component from REing a level 50 orange crafted item. I think it is just a bug though as REing orange items used to not give you any components at all. That being said, I would just RE greens until you hear a clear confirmation that they fixed it. It is a cheaper and faster to craft.

Thanks alot for the confirmation! I do have alot of empty oranges stored up so thats quite a bummer. Thanks so much for your help! Awesome as always dulfy 😀

Are the relics going to be unique? or can I have two +113 powers?

Should be able to, I didn’t have enough ranked comms to buy WH relics but here I am equipping two identical BM relics. Neither the BM nor the WH relics are unique.
http://i.imgur.com/8KCMS.jpg

Can you equip two of the same war hero relics now that they are passive? Not sure if it’s the best set up, but would be interesting to know if I could have two power ones on at the same time since I don’t have to worry about a shared CD.

They are not unique and you should be able to since I can equip two identical BM relics at the same time. the WH relics are not that different.

So will the matrix cubes update automatically if we already have them or do we have to reconstruct them?

Hey there!  You’re always full of awesome info, thanks!  Quick Q, does this mean they are taking out the reusable Rakata Stims and the Hyper-Battle Stims?  Cause I guess that would mean I need to stock up on them NOW before it’s too late, lol.

ah, they are still there. The currently reuseables will stay 🙂

Dulfy, can you use the campaign activation PVE relic ( the nerfed to power +270 one ) in PvP/Warzones?

Havn’t got a chance to test it on the PTS 🙁 No one queue for pvp anymore. You will find out this tuesday I guess 😉

So after 1.3 hits, 2xWar Hero Relic of BOUNDLESS AGES will be better than 1 Campaign Relic + Matrix-Cube for DPS? If that’s the case back to grinding PvP on my Sorc….

that is what I will be using, the 226 power from the relics is too sexy to ignore :p

Thank you for the update, as always you are the #1 source of information for SWTOR.

How much do you see these augment kits selling for when 1.3 goes live?

Already down to 100k on jedi covenant.

All I can say is that cybertech better have something SUPER cool coming in the near future! Thanks for the top notch info Dulfy!

I’m still not fully understanding, “Keep in mind that the attack adrenal now reduces heals by 20%…” Does that mean if I use it, the healing I recieve is reduced or does that mean the player I attack has HIS healing reduced by 20%?

your healing is reduced.

I think it’s easier to understand as the healing you do. It doesn’t affect healing received, but healing dealt. So DPSers can keep on using it, but healers got screwed. (not really screwed, just annoying that I have to use another Biometric to get the rakata triage adrenal now).