Preparing for patch 1.3: Some tips and pointers

Hey everyone, with patch 1.3 arriving next Tuesday a lot of you will be busy doing some last minute preparations. If that is the case, here are some pointers and tips to help you out! If you havn’t started yet, don’t worry, there is still plenty of time! (post semi inspired by this Reddit thread)

Augment slots and character specific legacy perks are not free (they are credit sinks in disguise). If you are looking to deck out your character with all augmented gear, prepare to have least a couple million to dish out. An augment can cost you anywhere from 50-100k, an augment kit probably 200-300k, and the cost to put the kit on the gear is 30k per piece.

Lets do some math!

Of course, it gets cheaper if you have already augmented some of the slots or if you can make the kits and augment yourself. Regardless, be prepared for spending at least 2 million to get all decked out! That is assuming you only have 1 set of gear. If you have two sets, one for PvE and one for PvP for example, double that amount!

Is it worth it? If you have cleared all PvE content and only log on raids, then you don’t have to worry until the next content patch. If you are doing PvP, prepared to see a huge stat increase. Players are always smarter than mobs and you gotta keep up!

If you havn’t done your dailies in a while, it is probably the fastest way to get some credits. The daily area will get a bit crowded due to the recent transfers but if you log on at an odd hour, you can always get some daily action!

Use L49 augments on augmented gear

If you have augmented gear lying around, make sure they are all filled with L49 augments (green quality will work). This is especially the case for low level items as their empty augment slots will be converted to the same tier as the item level unless you stuff it with L49 augments (Remember, the augment slot will be converted to a tier according to the item level  or the augment level, whichever it’s higher).

You can’t RE your crafted items for augment slot components yet but that doesn’t mean you can’t prepare for it! I can only speak for Armormech and Synthweavers since those are the two crew skills that I have but if you are an armstech, feel free to share some tips! Remember that if you want MK-6 components, only RE L49 items and above (L47 items were giving out MK-6 components on the PTS but don’t count on it for the live servers).

For synthweavers, pick up the recipes for either the Force Master bracers or the Force Master Sash from your trainers if you havn’t already (or the equivalent bracers/belts for medium and heavy armor). They only require 2x Primeval Artifact Fragment, 2x Upari Crystal and 2x Cortosis Substrate to make and only take 5 minutes. They will be the perfect thing to RE for augment slot components once 1.3 arrives. You will want to run the missions that yield Cortosis Substrate as it is cheaper than buying them from the crew skill vendor. Also, if you don’t want waste credits on running Archeology missions, Upari Crystals and Primeval Artifact fragments can be obtained from nodes on Ilum and Corellia. 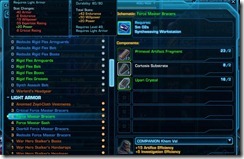 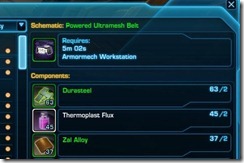 For other crew skills, make green stuff that you can RE for mats. What kind of green stuff? Anything that can yield an augment slot when crit (i.e. no stims, adrenals, mods). Biochems can make green implants for example and RE them once 1.3 arrives. 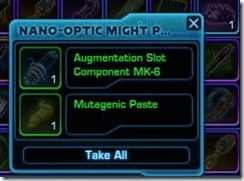 For those wondering if the items you made pre 1.3 will be eligible for REing for components, the answer is yes. I tested this on the PTS by REing some stuff I had on a character that was copied over with patch 1.2 and it gave me the components. This is a good way to get augment kits quickly on patch days as you don’t have to wait the extra 5 minutes for items to be crafted. As one Reddit user pointed out, use the mailbox if you don’t have enough inventory space! Mail them to some alt you have and have them mail it back on patch day!

For those wondering if you can buy crafted stuff off the GTN to RE for components, the answer is again yes. I tested this out on the PTS. Just make sure you buy crafted stuff (i.e. it will say Made by Player Name at the bottom) and not dropped stuff.

Lastly, don’t forget that augment kits & augments will be using some of the same mats you used to make items to REing for slot components. So stock up on Upari Crystal, Primeval Artifact Fragment, Durasteel, Zal Alloy, Cortosis Substrate, Thermoplast Flux. 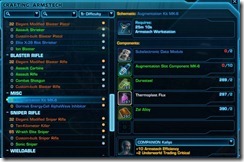 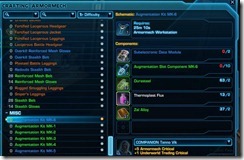 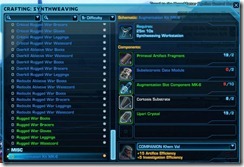 * Does not account for the mats you can get back via REing.

With the expected high demands for augments and augment kits, slicing parts have gone up quite a bit in price. Advanced Neural Augmentor, the part you need for making MK-6 augments (x4 per augment), have skyrocketed in price recently (20-25k each was the lowest on my server). Coupled with the need for Subelectronic Data Module from slicing for the MK-6 augment kits, it is not a bad idea to pick up slicing temporarily to lessen the cost (or make money) if you havn’t already done so.

Get your War Hero/Battlemaster Relics

1.3 changed the PvP relics from their previous on-use effects to permanent secondary stat boosts (i.e. power, defense, shield, alacrity). This made them very good for PvE as well and probably BiS (Best in Slot) for quite a lot of classes.

The War Hero power relic is especially sexy for DPS and healing classes as using 2x of those relics will get 226 power permanently. Unfortunately, the War Hero relics cost 1250 Ranked Warzone Comms and 200 Warzone comms to purchase and if you havn’t being PvPing much, it can be a long grind.

The alternative is the Battlemaster relics. The stats don’t differ that much (loss of 4 endurance and 10 power compared to the WH power relic) and they can be obtained for only 550 Warzone comms. 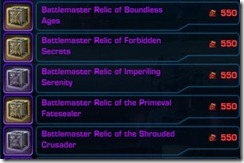 If you don’t want to PvP at all, the Champion relics are available for 11k credits each. They are not too bad either.

Here is a comparison of their new stats.

Want some ranked Warzone action? Do the PvP gear grind

Ranked Warzones will be team queue exclusively for now (i.e. queue with a group of 8). There will be solo queues in the future. This means that if you want to get any ranked warzone action, you need to be decently geared. Recruit gear isn’t going to cut it. Full Battlemaster is a maybe. Having some War Hero gear will increase your chance getting into PuGs that are forming.

The battlemaster grind isn’t too bad. If you PvP religiously, you can get a full set in less than a week.

With the change to social gear to be adaptive to your armor type and the availability of augment slots, social gear will once again become the latest fashion. Some of the best looking sets (i.e. Voss Mystic) will require you to get social rank 5.

While the social points are not hard to grind (there is no diminishing returns curve like with valor ranks), it can be a very boring experience. It is best to spread it out over a couple days in case you get burned out.

If you need an encouragement for running BT or Esseles over and over for social points, here is a list of all the social gear you can get with pictures!