Hey everyone, Savage Coast is the next zone after Kingsmouth. It is designed for players with QL3-5 gear. The main feature of this zone is a creepy amusement park, a light house and a school filled with monsters. There are less puzzle quests here in this zone compared to Kingsmouth and some of them are fairly tedious and grindy (i.e. kill x, kill y, kill z)

A Carnival of Souls

Quest obtained from Nicholas Winter near the amusement park and is the pre-requisite quest for Gravity, the main puzzle quest in this zone.

For this fight with the Bogeyman, he has some nasty abilities that can one shot you. The trick is to watch his cast bar and hide behind the rocks to LoS (Line of Sight) him when he casts them. A ranged weapon helps here but not necessary. 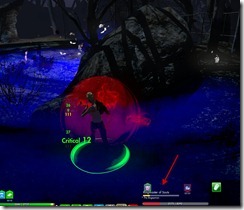 Quest picked up from the lighthouse – note that you will need to ride the elevator to get to the top.

Tier 4 – Use the telescope

Try zooming in on one of the things present in this picture.. 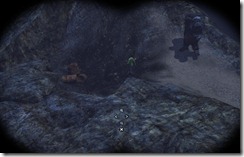 Quest obtained from Red and Bait

Tier 2 – Experiment with the ingredients to make an empowering tonic

The table to combine the tonics is outside the house to the right. 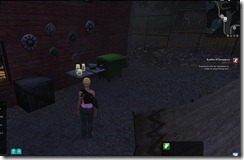 Make sure you combine them in the right order as the recipe suggested. 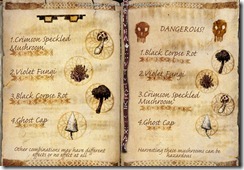 Downing of an Endless Night

For this step of the quest, you are faced with a locked door and several slots to insert stuff. 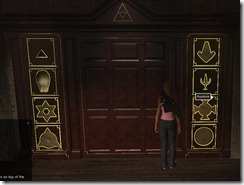 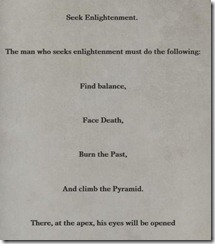 The clues are fairly easy but if you are having trouble, here are what they corresponds to. Don’t forget the last clue!

You must insert them in the order specified in the clue above, if you inserted the corrected item, it will have a glow around it.

Here is the order if you are having trouble

For this part of the quest, you need go around the entire instance, going room after room and collect the item to insert into the keycode like in the previous tier. Clicking on each item will spawn a mob that you must defeat. There are also rooms upstairs so don’t forget to search for these!

If you find it tedious to kill these mobs, you can skip some of the items that you don’t need for the keycode. Here is a list of what you actually need

Here are the clues .. the last one clue is a bit tricky 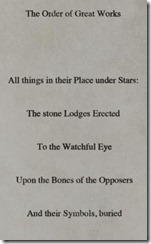 Where would you find the vault? If you paid attention to the cutscenes, you will know it is located underground. Therefore, it can’t be on the second floor.. What about checking the floor on the first?

The achieves are a maze, there isn’t a lot of features to distinguish one section of it from the others.  What you are looking for is guarded by the Caretakers but only one of them has the right information..

Once you find the information, you will need to stand on this symbol to activate the wall to escape.

You can obtain this quest from Nicholas Winter after you complete A Carnival of Souls.

It looks like an ordinary will. nothing seems to be out of the place.. Maybe you got something in your inventory that can help with it..

Having trouble reading it due to the small font?  This is the important bit from the will.

Go to the location hinted at in the will

If you have trouble getting to that location, it is here on the map.

Tier 2 – Find the second part of the plans

Make friend with the item you used to decipher the will, you will use it a lot! Note the strange drawings on the first plan? Maybe it is an indication of a path you should follow.

Having trouble finding it? Let me give you a hand!

The plans are not the only ones you are looking for.. there are some stuff you should pay attention on the ground that will help you with the subsequent steps..

You can’t use the picked up item directly.. How would you fit this new item to the glasses?

Find it the same way you found the second plan.

Pay attention to the ground as well!

Tier 4 – Find the fourth part of the plans

Tier 5 – Find the final part of the plans

So by now, you have probably spent quite some time searching on the ground.. let me give you a hint. What happens when you combine two colors? 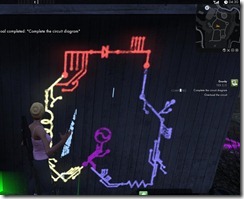 How to overload the circuit?

How to Get Ahead in Kingsmouth

You will pick up this quest from the area at the end of The League of Monster Slayers.

I find it a bit difficult to spot the footprint on the grass sometimes and had to backtrack a couple times. I have included the final location that the footprint leads you to in case you are having trouble with it as well.

The following quests are available from Innsmouth Academy. I highly recommend grouping up with someone for these quests as they are fairly tedious and grindy (need to kill a lot of mobs).

Quest obtained from John Wolf. I personally find it very annoying quest as some of the mobs here (i.e. Ghostlights) had this nasty heal debuff that made it very hard for healers to kill them.

Tier 1 – Clear the field of Ghostlights

You need to kill quite a few ghostlights before the quest will update, I think I killed 7-8 of those ghostlights.

Rest of the quest is fairly self-explanatory until you get to tier 4.

For this part you have to run around in the pumpkin fields (i.e. run into patches of pumpkin)– doing so will spawn the wisp form of Jack. Seems that only 3 spawns in the entire field and you had to wait a couple minutes before they respawn again. Anyways, I had to kill 3-4 wisp form of Jack before he finally poped out in his scarecrow form. 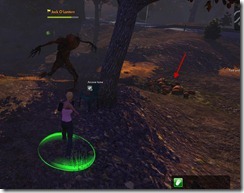 Quest obtained from John Wolf. You might have issues with some parts of this quest as Tier 2 is a bit buggy.

This part is very buggy on certain servers and the ambushers won’t appear. Try running out of the circled area and then run back in. If this doesn’t work, ask in general chat to group up with someone who have successfully completed this quest on their dimension (server) recently. Teleporting to their dimension will usually fix the quest and allow you to proceed.

Here is where I finally got the ambushers to spawn (I was standing on the edge of the circled area when these guys appeared and I backtracked a tiny bit).

Most people got stuck on Tier 3 of this quest as it was bugged on quite a few dimensions.

If this quest is not bugged, you should see this thingie on the ground when you are on this step. If you don’t see it, then ask in general chat to group up with someone who has successfully done this quest recently. 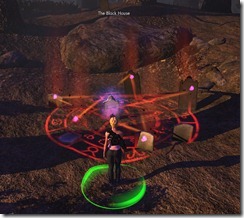 The urn is trapped, trying to remove it without deactivating the trap could potentially kill you if you are not careful.

The symbol on the ground is a pentagram. To remove the trap, you must click on the 5 corners in a very specific sequence.

Pay very close attention to how the pentagram symbol it’s formed, it will give you clues on how to deactivate the trap.

The League of Monster Slayers

Cute quest picked up from John Wolf at the Kindergarten but there are some steps that may not be too obvious.

For this step you have to go into a cave and collect the black rose. Note that the monster guarding it (The Sleeping One) will literally one shot you if you try to attack it. Just wait for him to roam outside the cave and then go in to grab the rose.

Tier 5 – Spit into the Black Pool

Tier 6 – Read the note from the League

This note is pretty important… 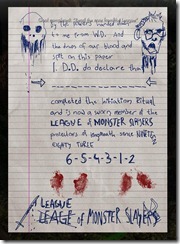 hey dulfy, you do great work, I’ve been following your posts since the swtor stuff. Just wanted to say I really appreciate what you do for mmos 🙂

Thanks, Dulfy! After enjoying your fabulous work on SW:TOR it’s great to see you plunging into TSW as well. 🙂

For the Taking the Purple quest, where you have to find the cameras, you might wish to mention that activating the tracking device in your inventory will give you an audible ping. The ping becomes more rapid as you approach the devices, making the quest very simple. I haven’t seen any other walkthrough mention that fact.

Thanks for all the work you do in the games you play. You continue to be a credit to whatever community you join. Bravo!

Does the tracking device work on all cameras or just the final one? It didn’t start to beep for me until the last camera so wasn’t sure if it worked on all. Thanks!

Where’s Tier 12 of Dawning of an Endless Night, find someone in the Blue Mountain who can tell you about the mines? 12/18?

sorry this was covered in Blue Mountains walkthrough – you are looking for the Franklin’s Manor.