Hey everyone, Polaris or Dead in the Water is the first dungeon you will encounter in the Secret World. This dungeon can be accessed by talking to the Orochi group at the north most bridge in Kingsmouth. The quest you get is called Dead in the Water but the actual dungeon itself its called Polaris.

This dungeon drops QL3 blue gear but it is doable in QL2-3 gear. 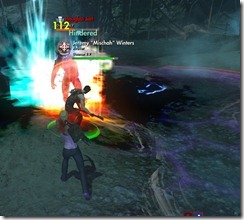 Another mini boss with 38k HP. She will summon two adds that you should kill ASAP. Call it add management 101. 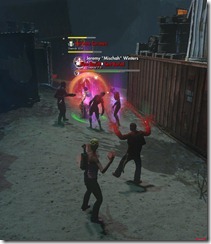 First real boss in this dungeon and probably the first difficult fight you will face.

There are two phases with this fight.

The first phase of the fight starts from 100% to ~50% and is done in the water. The only thing you have to worry about is the Deep Blast ability he casts. Just move away from the boss to avoid it. It is called Deep Blast and you can see it in the cast bar. 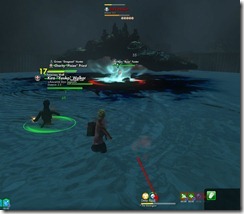 He will also disappear a summon 5-6 adds. They don’t have much health and can be easily taken care of. At around 50%, Varangian will run away and start the next phase of the fight. Follow him and kill any adds along the way (2 adds). 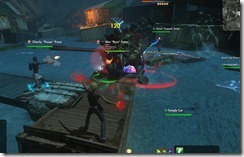 The electricity will zap you for 120 damage and 60 damage continuously if you don’t move out of it. Here is what an electrified container looks like. Note the red electricity debuff. 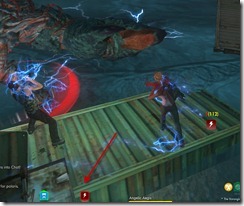 Mini boss with a frontal cleave (Corpulent Slam) and summon some adds. 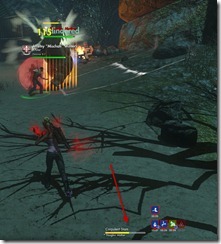 When the boss reaches about 10k hp, she will cast Eversion and explode into 3 adds. Move away from the boss so you don’t take damage from the exploion. 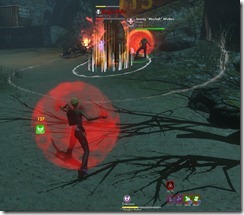 Avoiding bad stuff in the water and proper add management is the key to this fight. This fight for be annoying to healers as the adds tend to go for them and a lot of DPS will stay in the boss rather than killing the adds.

Not a very hard fight but lots of adds spawn so DPS need to make sure to kill them ASAP or they will chase after the healer and make his/her job a lot harder.

Tank and melee dps/healers can stand on the containers. The only thing they have to really worry about is Psychic Death Zone –  a knockback from the boss. Failure to move out of it will bump you into the air into the water. 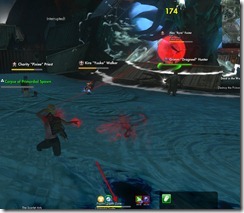 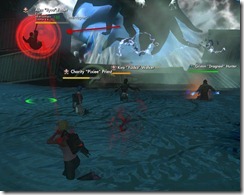 Ranged DPS/healers will stay in the water. You may need to move a lot to avoid the nasty circles in the water. Since you don’t need to stand still to cast your abilities, moving constantly is a good option.

Adds will spawn from time to time. There are two types – Primordial Spawn and Volatile Host. Primordial Spawn come in large packs and can easily swam over someone and do a lot of damage. DPS should burn down the adds as soon as they pop rather than focusing on the boss. 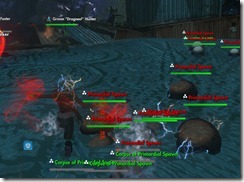 Very fun fight but can take a couple attempts to get the hang of it.

Ur-Draug has two phases, normal phase and a “blue” phase. He will start the fight with the normal phase but switch to the blue phase at least twice during the fight.

During the normal phase, it is pretty much a tank and spank fight. Take care to not stand in front of the boss unless you are a tank as the boss as a couple of attacks that are frontal. One of them is Slam, which is basically a 180 degree attack that can be avoided by dodging out of the circle. 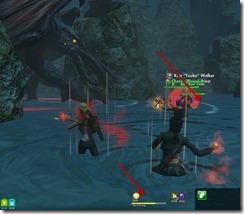 The other ability is Cosmic Gaze,  a channeled conal breath attack. Tanks can avoid it by standing under his head (instead of in front of him).  Ticks for 160-200 damage a tick. 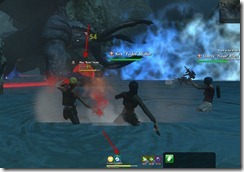 Shockwave is not actually an ability but describes an attack he will perform that you should be extra careful about. After you get your first blue phase and return to the normal phase, Ur-Daug will sometimes plunge into the water and reappear somewhere else to start the same animation as Rendering the Veil (“shockwave” animation). You need to hide behind rocks to avoid the blast. Unlike the phase change associated with Rendering the Veil, is no warning with this attack but if you see the boss dips into the water, then it is time to start running for a rock to hide behind. 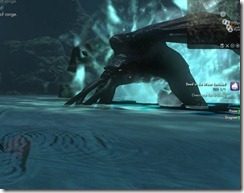 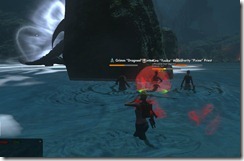 During the blue phase, you must hide behind rocks in the water and stay out of line of sight of the boss. You will know when the blue phase starts because Ur-Draug will cast Rending the Veil and you will hear a radio message telling you to duck and cover : Major dimension breach. Duck and cover. Do not engage until reality has being restored. In addition, you screen will turn blue.

During this blue phase, it is recommended that the whole group stay together and hide behind the same rock if possible so that the healer can heal you. If Draug spots you, he will use an ability called Cosmic Sundering. This ability roots you so you can’t move out but you can try active dodge. Cosmic Sundering is a massive knockback that deals for around 2k damage. You can survive this attack if you have more than 2k health and is topped off. Therefore, it is essential that the group stay together so the healer can top everyone off. 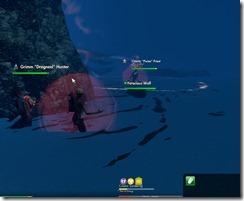 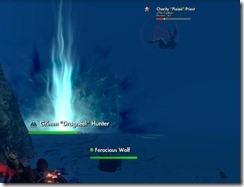 Adds will spawn, you will get 2 adds per blue phase. They don’t have a lot of health and don’t hurt much so the priority is hide behind rocks rather than killing adds. Adds won’t kill you but Cosmic Sundering will.

The other important thing to beware is that the boss will sometimes break the boulder you are hiding from with an attack called Primordial Hysteria. if that happens, immediately run out of the circle (Primordial Hysteria doesn’t root you) and prepare to dodge when you see another circle coming down (he will follow Primordial Hysteria with Cosmic Sundering, which roots you and can be only avoided via dodging.

When the boss is nearly dead, he will pull you in and activate the blue phase. Just burn him down when that happens. He won’t use cosmic sundering during this “fake” blue phase so there is no need to run and hide. [

Hey Kristina, only came across your stuff recently from swtor googles, and want to compliment you on a great site. Information and layout is first class, and across so many games. Just started looking at your tsw entries and can’t believe you can put up so much great info for so many games. For all the hard work, thanks and thanks again, I know a lot of people really appreciate what you do here. Your site is my first choice these days for mmo info.

I have just discovered your website and it is totally awesome. TSW lacks any real guides online and the wikis aren’t that great. Your site is a cut above the others very easy to follow and accurate. thank you

Thank you, glad you enjoyed it! 😀

Great Guide for the new TSW player…Like me !!

Trying to collect all the named weapon skins form here and get screen shots. Some of the nicer looking weapons imo.

To the author of this article I’d like to send an invite to join me in a duo for Polaris in that gear range because there’s a few small flaws/inaccuracies in the information in the guide.
For instance both the sorceress and varangian can summon more adds then just two although the varangian can only summon one at a time the sorceress actually increase the number she summon a bit over time.
This is the type of things I’ve noticed when trying to do this dungeon with less then a full team.
My main character, a blood + pistol healer with mostly ql 3 gear have duoed all but the last two bosses with people (tankish characters) in Kingsmouth gear only.

Now it’s true that 90% of the people doing the dungeon is never going to even notice something like that, but for the few that do this information could be helpfull 😉

Some more minor errors.
There’s more then one add with the end boss in blue phase.
When you run out of rocks if you use running around in the fog to hide from him as strategy you’ll find that there’s at least eight of them, possibly more, all searching for you during that phase.
As for the varangian, there is an viable option with a good healer to simply outheal the damage from the electric crates since it don’t last all that long and is often less harmful then the effect of people falling down between the crates when jumping from one to another.

This requires a group with a high heal pr second though either from one rather good or two decent healers.
It also helps to have the team split on two crates so you don’t have to heal the whole team when the crates go electric.
For instance by placing one half on one end of the horse shoe form and the other half on the other.
It seems like the crate in melee range of the varangian tend to get electrified more often then the other ones.
Of course all of this require the tank to keep the agro all the time.
Since he’s usually melee losing agro to a ranged dps or healer on another crate would mean that the varangian would move out of their melee range and all abilities they have that require that range…

Of course you probably know most of that stuff already, but some of your readers might not 😉

Anyway, great work. 🙂
Some of the things in this guide was actually new to me 🙂

[…] dungeons, 5 of them are copies of the normal dungeons you may have come across while leveling (Polaris, Hell Raised, Darkness War, Ankh, Hell Fallen) while the remaining 3 are new dungeons located in […]

This requires a group with a high heal pr second though either from one rather good or two decent healers.
It also helps to have the team split on two crates so you don’t have to heal the whole team when the crates go electric.
For instance by placing one half on one end of the horse shoe form and the other half on the other.
It seems like the crate in melee range of the varangian tend to get electrified more often then the other ones.