Hey everyone, now that a lot of people are finishing up their questing in Egypt and heading to Transylvania I want to share some of my experiences with the endgame gearing progression in TSW. Keep in mind that this guide is for QL10 gear and beyond only.

Most of your quested gear will be green stuff. Green gear, while doesn’t a lot the best stats, does have a lot of +health attached to them. Once you get to Transylvania, most of the quest stuff will give out green QL10s. The vendors also sell blue QL9 talisman for those Sequins you get from completing quests (doesn’t sell weapons unfortunately).

Dungeons will drop blue gears. The thing about these blue gear is that they are very specialized. They tend to give either +health, +attack rating or +heal rating with various secondary stats (i.e. +crit, +hit, +penetration) depending on the glyph attached to them. This means that if you only wear blue stuff with one stats (i..e all attack rating) you will be super squishy (<2k HP) and get close to one shotted if you don’t dodge out of certain AoEs etc in dungeons.

I recommend you having at least 1 +HP talisman if you are a DPS or healer. While most of the +HP items have secondary stats that are reserved for tanks (i.e. defense rating, block), sometimes you can get lucky and get items with DPS/heal oriented glyphs like this item here I snagged recently (it is a purple but used here as a example). 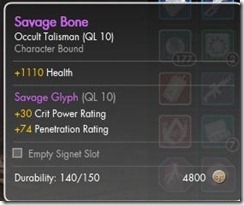 Purple items – You can get lucky and get a them as a rare drop sometimes but the best way is to either run Nightmare Dungeons or do PVP. I will cover these sections below.

There are 8 elite dungeons, 5 of them are copies of the normal dungeons you may have come across while leveling (Polaris, Hell Raised, Darkness War, Ankh, Hell Fallen) while the remaining 3 are new dungeons located in Transylvania (The Facility, Hell Eternal, Slaughterhouse). They can be done in your quested green QL10 year or lower tier blue gear from the leveling dungeons (i.e. Hell Fallen).

The 5 dungeons that are copies of the normal ones all have identical mechanics to their normal counterparts. If you have run normal versions  of them, then they are all fairly easy (Polaris Elite last boss hits like a truck though, something to be aware for healers).

For the three new dungeons, Hell Eternal and Slaughterhouse are fairly easy and quick. The Facility is a challenge even though it is located in the first Transylvania zone. It will require some extensive group healing for healers and some laser dodging skills for everyone. Tanks will need to learn how to gain aggro on multiple mobs gunning for your healers and squishy DPS.

All the elite dungeons drop QL10 blue gear, there is no reason to run the ones you don’t like more than once for the achievement. If you are looking for a specific drop for appearance and stuff, a friend of my made this tsw-loot website you might be interested in checking out (make sure to select Elite at the top).

One last thing, all the elite dungeons have an entrance in Agartha (including the Transylvania ones). Use this map if you need help getting around Agartha (can be a confusing place).

Nightmare dungeons are the top tier content for PVE currently (future patch will introduce raids and stuff). There are only 3 Nightmare dungeons available atm (Polaris, Hell Raised, Darkness War) but two more will be added on the July 31 update.

You can only access Nightmare dungeons after you have completed all 8 Elite dungeons at least once and received the achievement for it. 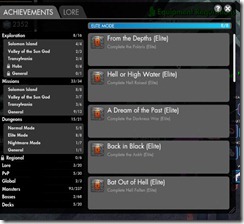 Once you got 8/8 in those achievements, it is time to head to the Gatekeeper and defeat him. The Gatekeeper is a solo fight with three versions: tank, DPS and healers and will test your basic understanding of dungeon mechanics. If you are curious where Gatekeeper is and how to defeat him as a healer, check out this section of a guide I wrote.

You should have ~2500 heal rating/attack rating in all QL10 blues( abit lower if you equip a HP talisman or two). Tank will probably have around 10-11k HP.

Once you defeated the Gatekeeper, you are attuned for Nightmare dungeons and can use the Agartha portal to access them.

All of the nightmare dungeons have lockouts. The lockout is 16 hours and starts as soon as you kill the first boss/miniboss. The lockout system atm is very buggy – if you crashed or leave the instance you may not be able to get back in. The lockouts appear as a debuff icon in your healthbar, with the numbers ticking indicating how many hours and minutes you have left before the lockout is cleared. 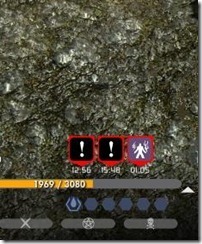 Nightmare dungeons will have bosses that drop QL10+ purple gear and also a token called Black Bullions (1 per mini boss, 2 per boss). 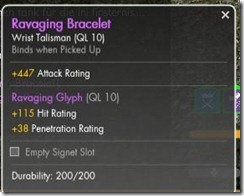 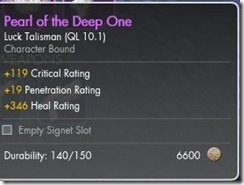 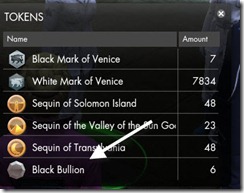 Black Bullions are used to purchased Purple gear from Nightwatch vendors in your faction’s HQ. There is one vendor for weapons and another vendor for talisman.

All talisman and weapons cost 30 Black Bullions each and 50k Pax. They do not come with any glyphs or signets attached to them but the slots are there for you to fill in. 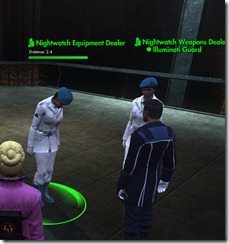 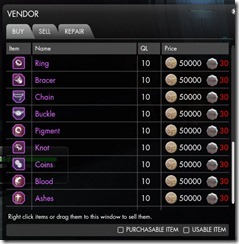 The weapons have 398 Weapon Power. Here is an example. 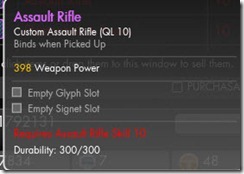 The major talisman will provide ~50% of your total primary stats while minor talisman provide ~30% with head providing ~ 20%.

One thing you might noticed is that the stats on the vendor/token brought gear is actually better than the purple gear that is dropped. That is correct, the dropped gear in Nightmare dungeons are intended to fill gaps until you can replace them with vendor brought gear. 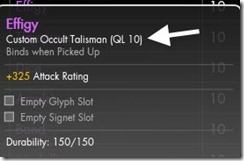 Now the description in the toolkit is a bit misleading! It does not mean that this toolkit has 4 charges. Instead, it means that it can only upgrade an item to QL 10.4. This toolkit will be consumed after a single use.

Something I want to stress for Nightmare dungeon is the importance of Cleanse and Impair (i.e. Interrupt). This isn’t elite dungeons where tanks can take a hit as long they dodge the nasty stuff. There are certain boss abilities that cannot be dodged and must be interrupted (impaired) or they hit tanks for 50-60% of their HP. Tanks and DPS should come prepared with impaired abilities. Tanks should be able to cover most of it but a backup DPS with it is always helpful incase the tank missed one.

One other important thing to note is that bosses have a Crowd Control (CC) immunity counter. This means that if you have stuff like Hinder in your abilities, it will quickly fill up his counter to 3 and make the boss immune to impair/interrupts. Make sure you do not use hinder abilities or impair abilities unless you are asked to.

As for cleanses, the few bosses I managed to kill in Nightmare so far didn’t require cleanse but later on there are some bosses where having cleanse is handy. Healers can supply cleanse (by switching one of their weapons to pistol) or have a DPS provide them.

One last thing, don’t come into Nightmare dungeons with <2k HP unless you are really good at dodging AoEs or avoiding adds. A dead DPS or healer does no one any good.

PvP, not surprisingly, has its own set of gear as well. PvP gear at the moment have identical stats to PVE gear. This means that PVEers who are trying to gear up fast can also PvP between lockouts.

PvP gear is purchased from the Requisitions vendors not far from the Nightwatch vendors in your faction’s HQ. The token used to purchase them are Black Marks of Venice and White Marks of Venice. White marks are easy to obtain but Black Marks are the real grind. 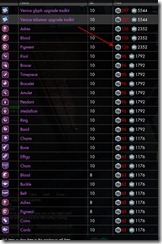 Ouch! As you can see, weapons, upgrade kits, and glyphs cost quite a lot of Black Marks and they can be a real grind. If you do both Nightmare dungeons and PvP, I highly suggest you buy the weapons off the Nightwatch vendor instead.

Again, something to keep in mind about those glyph/talisman upgrade kits, – they will only upgrade PvP gear purchased from the same vendor and only up to 3 times (i.e. only up to QL10.3, where the Nightwatch ones goes up to 10.4).

The issue is that the queues for them almost never pop so you end up waiting for hours before you get a match.

A much better and faster method is to do Fusang Projects. You get 7 Black Marks of Venice and 75 White Marks of Venice for a quest called Capture Facility that has a 30 minutes cooldown. Queues for Fusang projects usually pop instantly so you never have to wait. 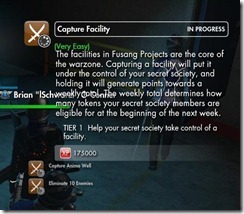 The two other quests, Eliminate 10 enemies and Capture Anima well, only rewards White Marks of Venice (35 for 10 enemies, 35 for Anima Well).

Here is a map of Fusang, note that there are four Facilities – West, East, South and Center. These are the ones you want to capture for the Black Marks. 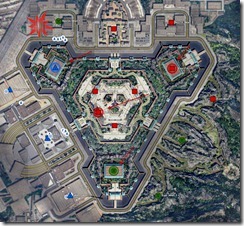 Each facility is guarded by a turret that must be brought down. In addition, there is a Custodian guardian that your team must defeat before you can click on the orb nearby to capture it. 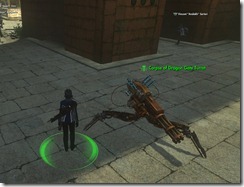 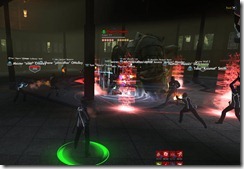 There is very little incentive to defend your facility as it does not reward you for doing so (other than the world domination buff that your faction gets). Once you have captured a facility and completed the quest, you can either leave and come back in 30 minutes when your quest resets or if you like PvP, complete the other two quests.

White marks are fairly useless as you get them weekly (every Tuesday after the maintenance) without even participating in PvP. If you ever run out of White Marks, make sure to do those two other quests: Eliminate 10 enemies and Capture Anima well – 35 for 10 enemies, 35 for Anima Well.

PvP, as you will find, is a whole world of difference. If you run around with ~2k HP, prepare to get one shotted by enemy players. Assault Rifle with the elite ability Red Mist is the FOTM build for a lot of DPSers as they can get a shot off before you even get close to them. Even in my crappy gear, I can crit Red Mist for 2k+ and one shot players with low health.

The gear you purchase from vendors will have empty Glyph and Signet slots. Glyph is something you are familiar with but Signet might be new for you. 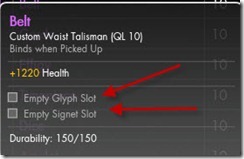 You can get quite a few blue glyph kits from the elite dungeons. However, for purple glyphs, you will need to either run nightmare dungeons or grind 222 Black Marks of Venice.

Nightmare bosses will drop these glyph kits that you can use to make purple glyphs (need Pure quality material).

This a major pain and unless you like farming, green signets may suffice for now.

Lair bosses (boss summoned by using blueprints dropped from those QL10 mobs you see from the various quest zones) have the potential to drop blue signets as well but that again require some time invested for farming the blueprints.