Hey everyone, Carpathian Fangs is the final quest zone in TSW. It is filled with vampires and giant hulking mutants! It is the home to The Castle, one of the infamous stealth quests in the game. If you are looking for the walkthrough for the Mortal Sins questline. keep in mind that it has its own page!

Page will be updated with new quests as I go through them. If you don’t see a walkthrough for a particular quest, check back!

Quest obtained from Traian near the entrance to the zone.

Tier 1 – Search for the traces of the hunting party 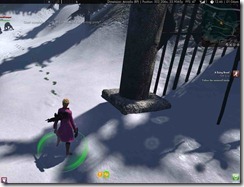 Following the tracks will eventually lead you to here after you have killed the Hunting Party in tier 3. 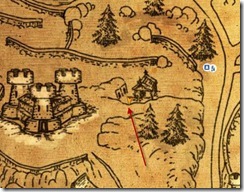 Tier 5 Uncover the source of the killing orders

The source is located right here. 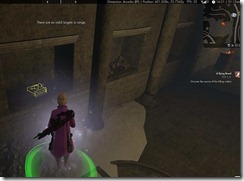 Tier 6 Follow the tracks to the source of the commands

Took me to here eventually. Quite a lot of mobs along the way though! 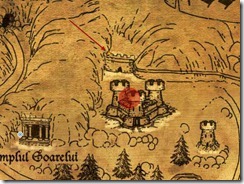 The Castle is a sabotage/stealth mission obtained from Rada Nastase after you have done the prior quest, Cabin Fever for her. This mission can be a bit frustrating for a lot of people but I didn’t find it as bad as some people made it to be.

Note: if you get spotted by any of the nobles in the house, you will be sent to the jail in the basement. There is a keeper mob there but you only have to kill him once for the keycode on the table. Rest of the time you can simple run past him without him aggroing.

Tip: Use your camera to your advantage to look around corners! Hold your left mouse button and pan your camera. Some of the mobs here are bugged and have X-ray visions so there is no reason you should play fair!

Go upstairs all the way, avoid the pathing noble in the hallway. You can pull the servants to a side room and kill them if the noble isn’t nearby. You can use the side rooms if you avoid the cameras. The keycard is on a table somewhere..

Hint: One of the cameras is guarding the keycard.

Now go back to the hallway while avoiding the pathing noble, you should now see a door opened by your red card. Taking the stairs down will lead you to a wine cellar with two side rooms. One of them has the military looking House of Danesti Nobles standing around.

Note: if you get caught here, there is a shortcut as you go up the stairs. Instead of going all the way up to the top where you got the Red card room, there should be a door on your right as you climb up the stairs. The Red keycard should unlock this door, giving you a shortcut.

The keycard is in this room where the House of Danesti Nobles are standing. Going through this entrance to the room might be a bad idea.. look for an alternative path to the room. 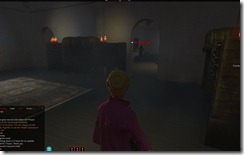 Hint: Do you see a hallway just to your left?

Once you got the keycard, you need to find the next door!

Now, remember the other room with the pathing House of the Danesti Hultan mobs? There are two of them in there (also a Lore object if you are brave enough).

Wait for them to path away, the best time to run is is when one guy is pathing this direction and the other guy is pathing this way as the picture indicated. If you are impatient, you can just run in where you see the path is clear, it is just a short trip to the jail anyways with the shortcut. 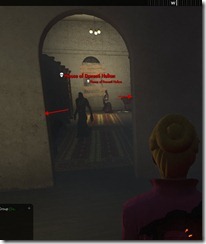 Once you reached the wall, take a left, there is a door hidden in there. 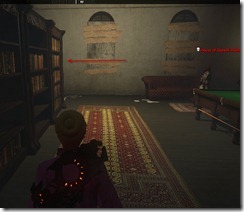 Once you opened the door, move on. Don’t linger by the doorway as one of the pathing mobs will walk over here and spot you. You are now in an open area. With 2x Danesti Hultan and 2x Servants. One of the Danesti Hultan is static so you don’t have the worry about him but the other one paths down and up the stairs.

As you will probably find out, the pathing Danesti Hultan only go up to the top of the stairs before turning and walking back down. This means that you should go up the stairs when he is on the bottom floor and walking away from the stairs. 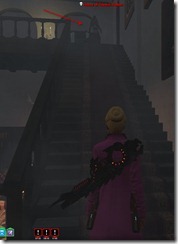 Once you go up the stairs, you might see this guy moving around. 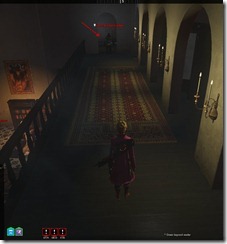 If you follow him, you will see that he doesn’t go far into the hallway before turning back, this means that you can’t just follow him and hoping to get into a sideroom before he turns as all the siderooms are locked. Instead, use this corner to hide. He won’t see you when he is walking back. Once he walked past where you are hiding, just proceeed to the hallway.

Going through the hallway will bring you to entrances. one left leading to a ledge overlooking the courtyard while the right path takes you to the next hallway. Do not linger in the ledge and enjoy the view! This guy down here has X-ray visions and will see you from down below! 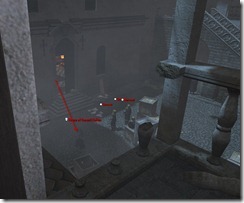 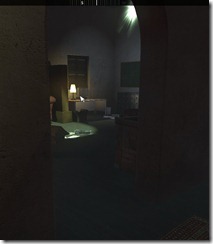 Remember that ledge you came across? You can use that to run across and jump off the main door. A better way though is to actually get caught and get sent back to jail.

There is a door unlocked by your Blue keycard right as you get out of the trapdoor. You can go up stairs to the ledge again and jump off near the doors. 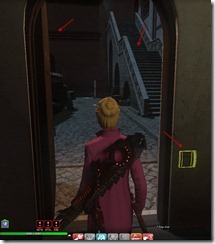 The door you need is right across the main entrance. It is unlocked in this picture but you will need to unlock it with your Blue keycard. 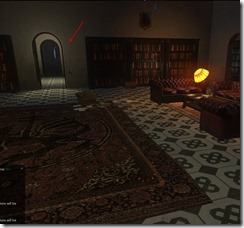 Once you get past that door, there is another one that requires Gold Keycard and two paths, one leading to a room that opens up to a hallway on the left and another leading to a small room on the right. There are two options here, you can either get through the door with a keycard (search for a desk nearby) or blow the door up!

I chose to blow the door open. I headed to the left hallway and grabbed the explosives there at the end after killing a bunch of servants. 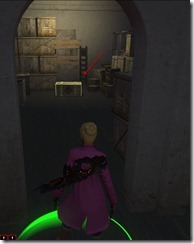 Here is where you need to place the explosives, make sure you run into the hallway or the sideroom before it blows up as there will be some mobs that will come running to check it out! 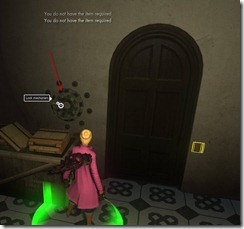 Tada! Here is the Grey. Some people have trouble fighting him since he heals so much. I had ~1.1k attack rating as a hybrid DPS/healer and didn’t have much trouble killing him. Just remember to not stand in the pool of blood. It is a big room. plenty of places to move around.

PLZ BE AWARE:
there are a number of lore items inside TheCastle, and as of right now, due to an unintentionall bug, you CANNOT repeat this quest. So if u want ur lore, get it first time around.

Is it still bugged?

like turkey saids, it is fixed now…is one of the quests i like to do regularly…easy 1.1mil xp, and once u know where the cards are it takes all of 20min to do

will do locations in a few >.<