If this is your first time doing Nightmare dungeons, beware that Nightmare bosses have increased defense rating that make your attacks (and impairs) glance much more. They also have a CC immunity counter – they will take a maximum of 3 hinder or impair effects before they become immune to it for a short interval. Don’t use hinder or impair abilities unless you are asked to. Btw, Shotgun Cleanup cleanse is pretty sexy!

Generally, tanks will bring his or her own impair abilities. Out of the three DPS, one should be support bringing cleanse, purge and backup impair as needed.

Note: As one forum user on the forums pointed out to me, Exquisite Corpse from Blood Magic is currently absorbing 50% of the damage of the large hits (despite the tooltip description) from bosses. This means that hard hitting abilities like Charged Hack from first and third boss, Corrosive Expectoration from the adds on the 4th boss or Cleave from Ur-Draug can have their damage cut in half entirely (i.e. Charged Hack that normally hits for 5-6k can be reduced to 2-3k, Charged hack that normally penetrates for 9k can have their damage reduced to 4-5k). Not sure if this is intentional but that is definitely an ability to pick up for now if you are having issues healing through the large hits on the fight (only consume 2 resources, no cooldown and instant cast)

Tank Observations: Tanks with high block will have high survivability in this dungeon as the mobs tend have increased penetration chance. Charged Hack for example, will hit 5k for a normal hit but as high as 9k for a penetrated hit. Tanks are expected to bring their own impairs and have Escalation as their builder for 30% damage increase for your party members.

July 31 – the alternative strat for Ur-Draug no longer works after patch 1.1, gotta do it the long way.

July 28- Added a much faster alternative strat for Ur-Draug. If you have good DPS, you don’t even need cleanse for bubble phase as you can burn him all the way to the “enrage” phase.

July 25: Added a trick for Haugbui Mother to deal with the exploding adds, also changed the strat for Primordial Dweller (impair is no longer needed). 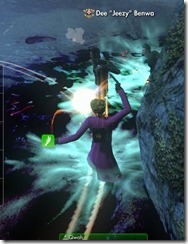 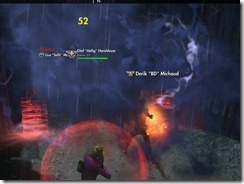 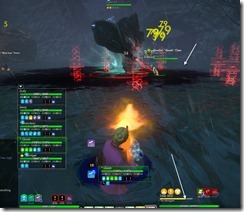 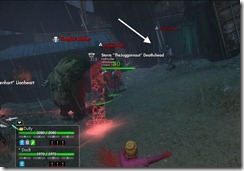 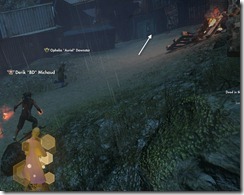 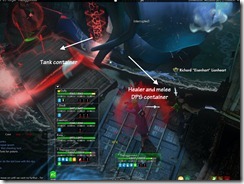 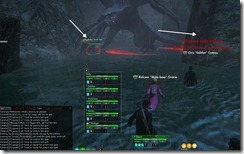 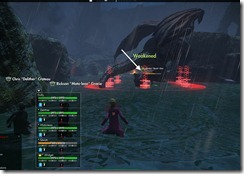 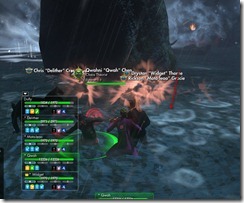 Video 1: A longer fight, our first kill. We went through a couple of blue phases here.

Video 2: This is a video of the fight I recorded right after patch 1.1 changes were made. It is a much shorter fight due to our DPS. We only got 1 blue phase and the bubble phase came before the blue phase.

Note on Balarbane Sorceress, you can impair Deathsquall. As a melee dps, with just a 30 second impair cd and a purge I can solely stop all Deathsquall and purge all walls making the fight “deal with adds, heal tank”.

Note on The Vrangian, there’s a barrel near the entrance of second phase that you can stand on and tank him at. No electricity. Can be buggy ish (boss not in melee range if positioned wrong). Not sure if considered an exploit or just smart play, seems setup to use that way.

Note on Haugbui Mother, a single ranged dps can stand on the shipping container near entrance and stop all the adds from coming forward. Shoot them once and they stop in place, unable to reach you. Not sure if considered an exploit or just smart play, seems setup to use that way.

I would consider the barrel an exploit, but it’s right on the path you need to walk through to get to him.

Hi there! Aive here. For the submerge part we keep Sleight of hand on everyone to remove the hinder from us also the tank can use it to make sure he dont get pushed back by Cosmic gaze! Infact it should make it possible for the tank to not take dmg form the boss during that phase! Also I talked with widget about this but thought I could post it here too, but during blue phase you can all postition yourself slightly in the middle and take turns tumbling out of the aoe! Although don’t tumble backwards as it is shorter than all the others, Personally i kept my face away from the boss as a tank and just tumbled forward. Make sure the tank is hitting the boss because otherwise he will attack someone else with his cleave(Which in fact is a single target ability for that phase), On one of our best runs we got the boss down to 100kish before first blue phase ended.

awesome, thanks! I tried the Sleight of hand tonight on our polaris run and indeed it make that phase alot easier. We didn’t attempt the blue phase trick yet but once we get more familiar with the fight it should make it alot quicker!

A slightly more fun strat is the already mentioned “fight all the time and dodge the gaze” strat. Here’s how I’ve done it (I am a fist healer, and this is a ton more fun for me):

Note: all should be wearing max dps gear, as a healer I choose to wear 1 tank minor tali to be able to take 2 hits from adds in succession. Ideally this will never happen.

When insanity phase starts, boss is between 2 pillars. Tank should be there and dps/pick up nearby adds (only nearby adds that happen to come by).

DPSers should be in the middle, as far from one another, boss and pillars as possible. If you are close to a pillar, dodge sometimes bugs and doesn’t work when gaze falls on you. All DPS should be doing is unload on boss and dodge when they get gaze.

Now the healer part. As a healer you will be running a LOT. Your area is the other half of the “arena” – the half close to entrance/anima well. Your goal is to be as far from boss as possible – if he’s just about fading out you will never get gaze.

As soon as you throw a few heals, you will get adds gunning for you. The good part is that they have short range and what seems like a slow cast time/attack chargeup. Throughout this phase you will be kiting around a train of adds that gets ever bigger. Your goal is to run circles around your area while at max range from the dps and throw heals on them as needed. Having platoon/fired up help as they don’t need LoS and I did not find I had to heal the dps any more than the 25 sec cooldown on fired up – I was also cleansing so had no Platoon. Tank takes little dmg in this phase, in my experience the most dmg on tank comes from too many adds on him. You will basically be healing ranged dps from a safe distance while running around with 10+ angry adds chasing after you and when possible running in withing tank heal range to toss a few heals on him and then back out. You can run big circles around the pillars far from boss – as long as you don’t run through adds and don’t stop running they will never catch up or hit you.

Near the end of this phase you may find the tank going down in HP because you cannot be on him all the time. What I do is – on one of my passes behind the dps I watch out for one of them getting gaze. When that happens I run in to cast Backup Drone on the tank, throw heals on him fast and then run out again. The 30% increased healing for 15 secs will get him back up.

This took a bit to perfect, but I can say that I have done this with pugs as well – in fact it is almost necessary to do it this way with low dps groups. As usual, having a shotgun cleanse or sleight of hand for when he does his aoe snare + bubbles is still mandatory. With an organized group this will of course be much easier.

Let’s face it, nobody likes to hide behind rocks.

Just wanna let some greetings in this thread 🙂
Thanks a lot for all that work you did (and help you gave me ingame)!!

it might be worth mentioning, that if the ur-draug does destroy the pillar or you fight him in the hide phase, the active dodge should always be forward. not side- or backwards. otherwise he might get you anyway.

Note on Primordial Dweller, while tanking this guy last night I decided to try something new, after a certain number of Psychic Death Zones he goes into a protective bubble where you can’t damage him. Well I loaded up on impairs and started interrupting those Death Zones and guess what, no bubble! The fight took us about half the time it usually does.

oh awesome, that is great to know. i will tell our tank to try it (he usually interrupts Synaptic Spasm out of old habit)

From a tanking perspective…
The Mother fight: I just position the mom at the very far end of the fight area, where the exploding adds come from. This way, the adds aggro on me and just stay there, so the DPS/healer don’t have to worry about them at all. Pay attention to the circles and one of them can be dodged to lighten the load on the healer. Or, just Exquisite Corpse it.

The Varangian: I want to say that if the tank gets hit by the Deep Blast, it is a threat wipe as well. I don’t have full proof of that, but it seemed like that was what happened my last run through. I blamed the DPS, of course 😛

Primordial Dweller: I’ll try to pay more attention to the CC immunity on my next run, but this is what I’m seeing on the Psychic Death Zone. Most can be impaired, but there are time and/or health related ones that cannot. These are the ones where the full shield and lightning storm go up and the large waves of little adds spawn. For positioning, I usually go to the far left of the container in front of the Dweller. This lets the rest of the group stand on the far right to avoid the water explosions.

The Ur-Draug: I may have gotten lucky, but during one of our learning attempts on this guy last night, my Sleight of Hand was on cooldown so I got hit by the Ur-Draug after the Extinction phase. The spell name is Depth Charge, and it only hit me for 2677 physical damage. I don’t have a huge stack of Physical Mitigation (maybe 600-ish with buffs going), but I did pop Stoicism (30% damage reduction). The 30% would put the damage around 3800. I don’t know if I got lucky or they maybe reduced the damage. Or the only reports were from DPS/healers that didn’t move 😛

Just some info from the Tanking side of things!

Just something I noticed on The Varangian; Deep Blast seems to be an aggro wipe, but I might have to test that some more to be sure.

The Varangian, aoe heals – I use Vigour and fired up, seems to do the trick nicely, just have to wait with the fired up, to get the full 900 points out of the first burst.

[…] decided to try Nightmare Polaris; Rowan brought the wicked heals (bolstered by his brand new Subtlety), and Ocho, Grace and […]

[…] Blame the extra chores our surprise snow storm caused. In any event, the Knights of Mercy took on Nightmare Polaris once again, and this time pretty much rocked […]