Hey everyone, Nightmare Inferno/Hell Raised is the second Nightmare dungeon in the series of three Nightmare dungeons that are available atm. None of the bosses here hit too hard (except the last boss) but most of them have AoE abilities that requires the healer to cope with. In addition, like normal or the elite version, a lot of the bosses here have strict DPS checks. We just killed the last boss tonight so the strat for Machine Tyrant is up!

I personally find the dungeon (not including the last boss) to be a tad easier than say Polaris or Darkness War if you have good DPS and the tank know to interrupt or get away from Searing Brand. Recursia is the only challenge fight of the first 5 bosses but it is a good kind of challenge (something you can solve with a bit of strat).

For this dungeon as a healer I run AR/Blood build with Cold Blooded + Platoon (+ Mortar Support on the first or the 4th boss) and all the group healing passives (Veteran, Leech Therapy + Anticoagulant). If you are using Fist/Blood, I would drop Cold Blooded and pick up Shelter + Fired Up. 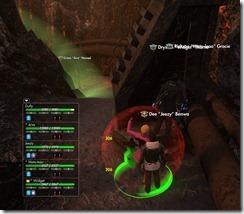 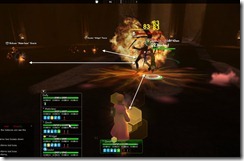 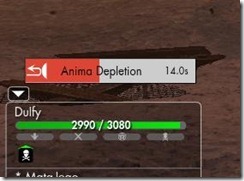 Hi Aive here, was fun doing this with you guys! Also as I recently learned about recursia is that Recursia tries to move away from the Tank so by smart positioning from the tank you can move recursia away from adds during last phase. Im sad I didn’t know this before today, but just wanted to make you guys to know just in case 🙂

interesting, so if Recursia is standing next to the adds you just have tank stand next to her to make her move? What if she drops a yellow bubble on top of the tank?

thats true – shes runnin away from tank, even if she drop bubble @ tank she will move away from him so all should be fine

I used to force her to move like first stated, and I still do – there’s a few bosses like this: Recursia, then also the first boss in SH…

But what I’ve done the last couple times is after I interrupt her last halo, I’ll just range pull her around to aovid any possible dogs. It buys a group who’s struggling about 5 – 10 more seconds to kill her.

Normally me (as a tank) and my group spread around her before the last phase so that she doesn’t throw a bubble on herself. As soon as she throws that bubble, I move in and start directing her wherever I feel like. I also have one interrupt for unfortunate Arcane Halos and Chaotic Pull for “one add made it through!” during normal add phases.

Hardwired Fleshtank :
platforms are on fire based on % HP left on the boss.

We farm 3 man the three first bosses with friends for loot sharing, so it took us forever to kill it.

number of platform on fire I mean.

This is accurate. I don’t know exact percents, but he will set more and more platforms on fire as his hp goes down. However, there will always be at least one platform that is safe for everyone to stand on, though I believe it is chosen at random.