Hey everyone, Slaughterhouse is the elite dungeon located in Carpathian Fangs but also have an entrance in Agartha. While it is a dungeon located in the last zone of Transylvania, it is actually one of the fastest and easiest elite dungeons to run. If done properly, this dungeon can be finished in 10-15 minutes,  and yield ~20 AP. Quite a lot of people run Slaughterhouse (SH) for the purpose of farming APs.

Most of the bosses in here are just tank and spank with some variety added to it. In this case, you have those orbs that you need to pay attention to. 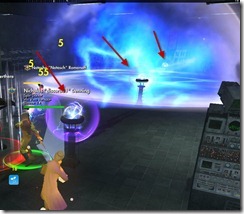 Tank usually tank the boss near the entrance orb initially and once the far orb goes off, drag the boss to there to play it safe.

Adds: There are two inactive Cleanup bots sitting in the room. One will activate near the end of the fight and come over to beat up on the healer (not sure if activated by boss’s HP or timed). I usually just tank this as the healer as he doesn’t hit hard, tank can grab it if the healer is having trouble. This add should be ignored and DPS can just burn the boss down to finish the fight. 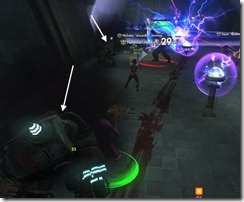 This fight is probably the longest fight in here and can be quite messy sometimes for beginners.

TLDR: Ignore adds that pop, kill them off during the Burning Plasma phase when you have to hide. Dodge the Alternating Current AoE and purge the boss’s shield if possible.

Blue Aura (Electromagnetic Field) is a blue area around the boss that will activate and revive any Cleanup Bots in it. When you first start the fight, there will be quite a lot of inactive Cleanup Bots lying still on the ground. As the fight progresses, they will get activated as NKL-107 runs by near them and whenever NKL-107 goes through the Burning Plasma phase.

Cleanup Bots: These adds don’t hit for much but they don’t come alone. At later phases of the fight, it is not uncommon to have 8 of them running around, whacking on group members (usually the healer). It is therefore ideal for the healer to equip some HP items (~3k HP is fine) so they can take a few hits from the bots before the tank pick them up. The bots themselves have ~9K HP each. We usually ignore them and DPS the boss until the boss goes into his Burning Plasma phase. During that phase, we kill off all the adds that followed us to  a tiny room at far end of the fight area. Tank will usually run out as soon the Burning Plasma phase is over (i.e. run out as soon as the blue liquid fades) to prevent the boss from getting near the room and reviving all the adds we just killed. 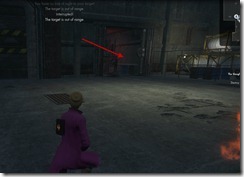 Burning Plasma: Burning Plasma is an AoE from the boss that you must LOS. You can hide behind one of the pillars or in the small room described above. During this phase, a bunch of adds that are out in the open will become activated by blue liquid after the boss casts Burning Plasma. You will know when the boss is about to cast this ability  as he will suddenly starting running towards the entrance of the room and have white lines around him. Depending on your DPS, you may get at least 2-3 Burning Plasma phases. 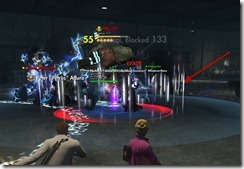 Despite the fact that we try to kill the adds in the little room, at least half of the adds seem to always come back to life during this phase. There isn’t much you can do expect having the tank go out ASAP to stop the boss before he goes into the room.

Cleave: The boss and all the adds have Cleave attacks so it is ideal to never stand in front of them.

Alternating Current is a ground AoE from the boss that leaves a persistent ground effect that lasts for quite a bit. It is ideal to never position the boss near the little room or tank him horizontally across the room as the AOE circles he leaves behind can prevent people from getting to certain parts of the fight area to hide.

Resistance is a shield that the boss casts on himself that should be purged if possible to make the fight go faster. You will know when the boss has this shield on due to the bubble graphic around him. 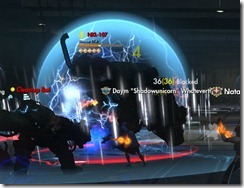 Malfunction – Malfunction occurs in the last phase of the fight after a Burning Plasma phase, NKL-107 goes crazy and start running around all over the room with white lines surrounding him (as if he is about to activate Blue Plasma). Chase him down and kill him, kite and ignore any adds that comes along. It is rumored that if you don’t kill NKL-107 during this phase fast enough bad things will happen but I personally never seen it even with one or two DPS down.

Another fairly easy boss with some mechanics copied from the first and second boss.

Orbs: Instead of 3 single orbs like the first fight, you now get 3 rows of orbs. The left row will activate first, then middle, and then right. If you don’t kill the boss by the time the right row goes off, the orbs will apparently explode diagonally, making the fight slightly harder in terms of positioning. We usually tank him in the middle row of orbs and then move to the left row of orbs after they explode.

Adds: Two Vat-Grown Suppressors will spawn during the fight, they each have ~9k HP and we tend to ignore them and just burn boss. They hit slightly harder than the Cleanup Bots from the previous encounter but not so much that the healer or one of the DPS can’t offtank it.

Resistance: The boss here also have a damage reduction shield like the previous boss but he doesn’t it use it often. You can kill him without having to purge.

This is a fun fight, the kind of fight that makes you feel bad after you done it.

TL:DR  Tank and spank, when boss teleports to the center,

Failure to send a scientist up will cause the boss to pick the nearest party member and eat them instead. If you run out of scientists, have a DPS run up and get sacrificed, they are doing a poor job anyways!

Red Rage: Each time the boss eat a scientist or party member, he will gain one stack of Red Rage that accumulates as the fight goes on. Each stack increase his physical and ranged damage by 10%. This is a soft engage mechanic but the damage increase is not really noticeable.

Scanner is the ground AoE that the boss has, just avoid it! 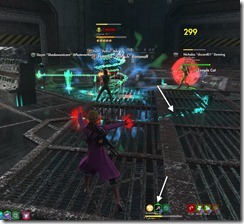 This is a tank & spank fight with a DPS race.

TLDR: Ignore the adds, pull boss to the other end of the room, dodge his conal attack.

This boss fight couldn’t get any simpler. The boss itself is a tank and spank with conal AoE called Closer Encounters that you will want to avoid.

Don’t fight the boss where he stands though, pull him all the way to the other end of the room. This is because the cryotanks you see on each side will soon explode, releasing adds that slowly advances towards your party. There is no reason to kill the adds, just focus on the boss and burn him down before the adds reaches you. If your party need an extra seconds or so, tanks might be able to run into the adds and sacrifice himself to buy more time for your DPS to burn the adds down. 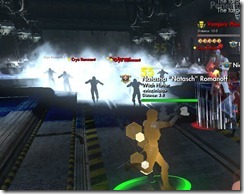 The final boss of this dungeon is a bit more involved with multiple mechanics and phases.

The first thing to be aware is that you should not tank the boss on the platform! The platform will actually inflict damage on anyone standing on top of it. Instead. drag him off the platform and face him to a side direction so your melee DPS can attack him from behind.

Ice Grenade: When the boss run up to the platform and points his gun up, you know he will do the Ice Grenade attack so just keep your eye out on the ground. These grenades are pretty easy to avoid but they do put a temporary spot on the ground you can’t cross without taking damage. 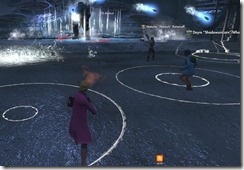 Ice Spray: This spray usually comes after the grenade attack, it is very easy to avoid as he sprays only to only one  side of the room and slowly move to the center. Players who fail to avoid this spray will get encased in an ice block with 1337 health (yes, 1337 health) and need to be released by killing the ice block. 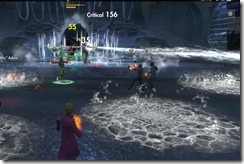 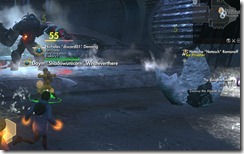 Ice Imprison is targeted attack directed at the tank (or whoever has the highest threat). Like the spray, it will encase them in a ice tomb with 1337 health. Failure to release the tank will cause your tank to get one shotted and result in a wipe.

He will repeat the sequence of attacks: Ice Shot –> Ice Grenade –> Ice Spray –> Ice Imprison until he reaches 166602 health, which triggers phase 2 (he may temporarily stop taking damage for a short duration).

Phase 2 begins when you are dropped to the blood pool below. This is the phase you start again if you wipe if you made it this far. Immediately at the end of the tunnel is Aleksei-Dva who will chain summon adds called Failed Experiments. However, he has only 33K HP so you can easily burn him down and then kill the adds after. 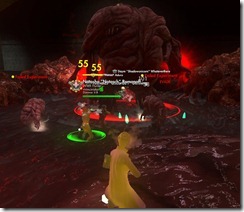 Immediately after you kill off the boss, you should head to the other end of the tunnel, dragging the adds along and killing them along the way. Tank will need to go in and attack Aleksei-Chetyre right away before he start targeting random group members and yanking them to him (to avoid getting yanked as a healer or DPS, use the nearby walls to LOS him as you run in).

Instead of the ice attacks, Aleksei-Chetyre will now use two new abilities:

Splatterhouse: This will encase the tank as a Flesh Clump, again with 1337 HP that the DPS need to damage to break the tank out. 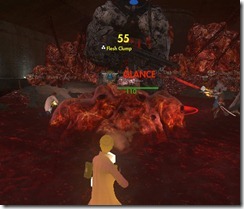 Toxic Ooze Release: This is a lot more nasty than the ice spray. The boss like to spray this all over the place, causing massive party damage if not avoided (also a lot harder to avoid). If possible, tank should position the boss away from the other party members to avoid them taking damage from this spray. 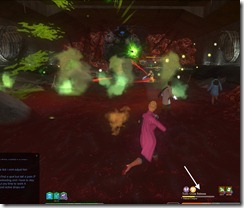