Hey everyone, this is my TSW signets guide that I have been working on for a bit for the past week to collect the various data. It is a list of signets currently in TSW and a list of spots to farm/acquire them. Special thanks to Double-Dodge/Shiva for verifying some of my data!

Signets – what are they and why farm them

Signets is part of the endgame gearing in TSW. You will start to see signet slots on your QL10 gears. It is something to can acquire outside the Nightmare dungeon lock outs when you are doing endgame gear progression. Signets right now are divided into three types: green, blue and purple. It takes 10 identical signets to form a blue signet of the same name and 10 identical blue signets (i.e. 100 green signets) to form a purple signet.Alternatively, lair bosses will drop a blue signet when killed and regional bosses will drop a purple signet when killed (these bosses require extensive lair pattern farming to spawn).

Signets are randomly dropped by Nightmare and Lair mobs (drop rate is fairly low so it can be a bit of a grind). There are also 7 quests with a 68 hour cooldown that guarantee one signet per quest completion. Due to the low rate rate and the fairly tedious method to acquire them, signet prices are skyrocketing and it is not uncommon to see people asking 4-6 million for a green Signet of Violence (+47 attack rating for major talisman).

There are 7 quests that rewards signets. They are all located in the first and second zone in Transylvania and all have 68 hrs (~ 3 days) cooldown. Each of these quests are guaranteed to give a signet reward bag, which tend to give out green minor signets (on rare occasions you may get blue signets, one of my cabal mates got two blue signets in a row from the Wild Hunt reward bag).

Signets only drop off Nightmare and Lair mobs off each zone (if you see them drop outside these mobs, it is a bug). These mobs are all QL10 and have special buffs that indicate their Nightmare/Lair status. Nightmare mobs can be soloed while Lair mobs tend to have a ton more HP (i.e. 45k) and it is more efficient to form a group to farm for them instead. The list below is taken from try1t’s excellent Signet and Lair Farming Guide 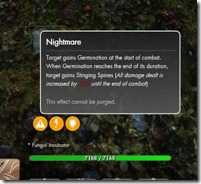 Nightmare mobs tend to drop minor signets although very rarely that can drop non minor signets as well. They have ~7k to 21k HP with 14k HP usually most common.

There was a theory proposed by Drinkfist (leader of the Goon Squad) that he posted on the Testlive forums. This theory of unique zone drops has being disapproved but it is still good info. I copy and pasted his info here. Instead of this theory, what a lot of people found is that certain zones have higher chances of dropping specific non minor signets.

I have noticed a trend in the way Signets drop and wanted to drop a thread to help you all in your search for the signet that is right for you. Here we go.

Now in my lair farms I have see a few signets that are only dropping in certain zones. This includes the Nightmare Spawn of each zone so I am going to set up a trendy guide that I will update with all kinds of fun Maps and the like for you all to track the signets that drop in each zone as I see them. First off I need to clear up how this works. There are a few types of Signets:
– Head
– Head and Weapon
– Major
– Minor

Now if you kill a Lair Mob or a Nightmare Mob (When you look at a mob you will see a buff that says either Nightmare or Lair on them if they are the ones you are looking for) you have a chance to get any minor signet to drop along with (From the look of it so far) three zone unique signets. The Unique signets are always in the Non-Minor Signets Classification. So for example if you are farming Savage Coast’s Nightmare spawn the mobs will have a chance to drop all types of minor signets and a possible chance for "Signet of Vigour" "Signet of Order" and "Signet of Resiliance". The three signets I have just said are what I am going to call "Zone Unique Signets" because they will only drop in Savage Coast

Nightmare and Lair mobs.
So here is my current handy dandy list as I know so far for Zone Unique Signets:

Kingsmouth.
Signet of Castigation – Head or Weapon – When you hit a target you have a 10% chance to make your next 4 hits never miss. 10 Second Internal Cooldown.
Signet of Abuse – (I forgot but it was really good I swear)
Unknown / Forgotten

Shadowy Forest.
Signet of Benediction – 20% Chance on heal to apply Barrier to target for 40. Last 10 SEconds.Head wep.
Signet of Amelioration – Increase Heal Rating by 47. Major.
Signet of Discipline – When you are glanced you gain 62 Defense Rating for 8 seconds. 10 seconds cooldown. Head.

Carpathian Fangs.
Signet of Valour – Applies Barrier for 40 for 10 seconds on Crit. Head Wep
Signet of Corruption – Increases Afflict by 5% dam. Head.
Signet of Laceration – When you crit you gain crit damage increase by 6% for 15 sec. 15 sec cool. Head or Wep.

Missing Signets:
Signet of Temperance When you heal a target below 50% health they are given a HOT.
Signet of Cruel Delight When you hit a weakened target you have a chance to be healed
Signet of Reinforcement When you are glanced you gain magical and physical protection up to 3 stacks
Signet of Violence Increase Attack Rating

Reinforcements/Resilience drop in Farmlands off of vampires. I’ve gotten Breaching in Savage coast I think too. However some loot tables might also be screwed up — you can tell based on Sequins drop.

Great guide as usual and Drinkfist’s post completes it nicely.

I spend quite a time farming signets/money/XP alternately to PvP on days-off and though what some said I totally agree with his theory.
The more interesting signets can’t be found everywhere and there are specific locations where a particular signet can be found.
For instance I have never found major signets -i.e. Violence, Amelioration and Vigor- before Transylvania and Mirewood in particular which is for me the best place to farm them.
Opportunism is very specific to the Scorched Desert, Mummies and Cultists in particular, Sadism to Blue Moutains’ quarry and so on.
Warehouse’s Zombies are very interesting as with “an architectural glitch” you can farm huge packs of them alone-beware of you GPU though :p- and they drop interesting tanks -Resilience or Discipline I think- and DPS signets -Abuse and Breaching 100% sure-, tons of components, minor signets, money AND last but not least XP.
Thank you again for your guide and good luck in your NM runs 🙂

Minor signets drop in all the zones, at least the DPS minor ones. Also, the loot tables might not be related to “types” but rather specific names. For examples, Death Squad vampires don’t seem to drop the same kind of signets as Wallochian ones, but I don’t have large enough sample size. (My personal sample size for zombies in Soloman Island is some 6k+ and I know a guy who has 45k+, so fairly confident on those)

Castigation , Opportunism and Extrication all drop at Sol Glorificus. All other signets drops there are minor ones.

Noob signet question but I can’t see it mentioned: can you stack the effects from multiple identical signets? i.e. having the same signet in all talismans it can go in

I know signets like abuse, castigation don’t stack as have tested with slotting and it states ‘Multiple signets of this type do not stack’.
Signets like shards (minor signet) which give damage increase to shotguns for example does stack, so you can get up to 9% increase using those in minor talismans.

Hey there – you left out “Obedience” (When you hit an impaired target, you gain increased damage of 1%/2%/3% for 5 seconds, up to 3 stacks), a head/weapon signet. 🙂 otherwise, awesome guide!

Signets of Interdiction, Benediction and Temperance all drop in Mirewood against Fungal mobs

Signet of Cruel Delight drops in Kingsmouth, Im 95% certain since I had one before they put the Marketplace in and I only ever farmed in Kingsmouth. There is a slight chance I received it from Transylvania missions though.

What quests are included in the set of “repeatable solo nightmare missions”? That could potentially be a large set of quests . . .

City of the Sun God
Eye of Horus (Thutmose)

Blue Mountain
The Filth Amendment (Orochi Computer in the Van)

found violence in shadowy forest, blue mountain and savage coast, maybe its in all zones

on the Major signets, the blue versions of Signet of VigourYour health is increased by 165//.increases health by 330

Sorry for the double post, I saw that you don’t have the Signet of Abuse info

“When you hit a target you have a 10% chance to gain a damage increase of 7% for 5 seconds. 11 seconds cooldown. this signet can be attached to Head Talismans or Weapons.”

Can Signet of Extrication work with Close Quarters? Can multiple ones be used or do they not stack?

for those looking at this at a later date, due to changes to nightmare areas, some missions do not give out signet bags anymore as this was made (and never been updated since) before said changes.

[…] Brutal Glyph (4x crit) will add: 97 crit rating to all majord talismans. World Boss – TSW notes. TSW Signets guide. Hey everyone, this is my TSW signets guide that I have been working on for a bit for the past week […]

[…] TSW Signets guide. Hey everyone, this is my TSW signets guide that I have been working on for a bit for the past week to collect the various data. It is a list of signets currently in TSW and a list of spots to farm/acquire them. Special thanks to Double-Dodge/Shiva for verifying some of my data! Navigation Signets – what are they and why farm them Signets is part of the endgame gearing in TSW. Signets are randomly dropped by Nightmare and Lair mobs (drop rate is fairly low so it can be a bit of a grind). Signet List Head Head/Weapons- Heals Head/Weapons- Tank Head/Weapons- DPS Head/Weapons – Hinder/Impair Major Minor – DPS Minor – Heals Minor – Tank Signet Rewarding Quests There are 7 quests that rewards signets. Besieged Farmlands Foul Banquet – Father Lucian Ripples – Vampire Hunter The Girl Who Kicked the Vampire’s Nest – Zaha Shadowy Forest The Cellar Door – Silviu Dimir The Wild Hunt – The Iele Fungal Fireworks – Luminita (near Milosh) Crossroads – Mosul Signet Farming Locations Nightmare mob farming locations. […]

[…] – TSW notes. Signets guide. Hey everyone, this is my TSW signets guide that I have been working on for a bit for the past week […]