This is the boss strat for Ciphas, Heirad, and Kel’Sara, the second boss in SWTOR Terror from Beyond Operation in Patch 1.4. Included are strats for storymode and hardmode. Video for hardmode will be coming shortly.

All bosses are immune to CC and have the buff Death Covenant (When the target dies, any Dread Guard Commander in the area are fully healed). This is to prevent you from killing all bosses at the same time as killing one will fully heal the others.

In addition, every boss have uniques buffs.

Heirad, in particular, have Taunt Immunity and cannot be taunted. He will instead target random players and damage them with Force Lightning.

The three bosses are killed in the following order: Heirad –> Ciphas –> Kel’sara (HCK). The reason for this order is as follows

Heirad will randomly shoot Force Lightning at random players in the raid. This attack deals 700-1400 damage per tick and ticks for 3-4 ticks. Two tanks will tank Kel’sara and Ciphas and do a tank swap on when the debuffs on the tanks reaches 5 (5 is an arbitrary number, you can swap earlier or later than 5).

After a few lighting attacks, you will see the message – Heirad Begins to Cast Surging Chain! Ciphas will hop over and casts Empowered Barrier on Heirad to make him immune to damage. You now must damage Ciphas so break his shield bubble and the interrupt his Empowered Barrier ability. The symbol for his shield bubble is the same as the sorc/sage bubble. Surging Chain hits for 2.5-3.5k. 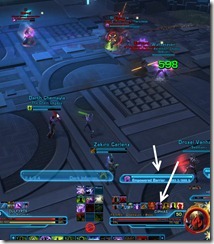 Rest of this phase is basically Heirad switching back and forth between Force Lighting and Surging Chain.

You still need to tank swap between Ciphas and Kel’sara while burning down Ciphas. Ciphas will doom random players in the raid (doesn’t seem to target tanks). You will get a red text on screen when this happens.

When someone is Doomed, they get 2 stacks of the Doom debuff on them (2 stacks in storymode, 3 stacks in hardmode) and will need to run into 2 green circles on the ground to clear it. 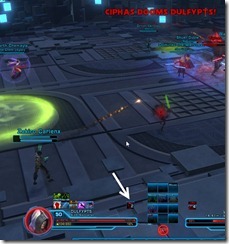 Green circles on the ground are called Expiatory Motes and are spawned on top of players. You get a warning for when the circle will spawn as your character will get green mist shortly before the circle appears. Move as soon as you see the green mist. 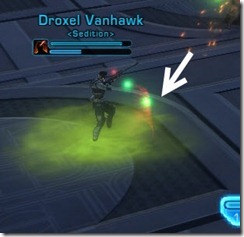 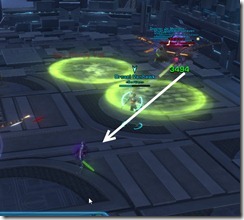 This fight is very healing intensive on hardmode, especially phase 1. You will want to get through phase 1 as quick as possible and get only one Lighting Field.

Heirad has some nasty tricks up in his sleeves for phase 1 on hardmode. He will start to channel Lighting Field shortly after his Surging Chain immunity phase. This is a raid wide AoE that ticks for 1144 per tick for 7 ticks and then explodes, dealing anywhere from 6.6k –7.5k damage if you are all spread out to instant one shot if you are all clustered together. So, spread out as much as you can! The circles in the picture below will give you a rough idea of how much you need to spread out. 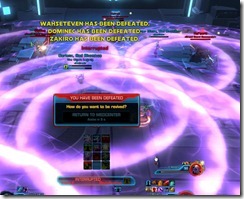 Generally if you are <50% HP when the lighting Field started, there is a very good chance you won’t survive it. Use defensive cooldowns/medpacks if you need.

Everyone need to be assigned a spot in the room that they run to for this phase so people don’t run into each other and get each other killed. Tanks and healers should be near each other so tanks can be topped off after this phase to tank Ciphase and Kel’sara. Ranged DPS should be assigned spots near the bosses they can they keep DPS during the Lighting Field phase to help meet enrage timer.

After the Lighting Field phase, it is a good idea to have everyone stack in the same pile (make sure you face Ciphas away from the raid due to his cleave) so healers can drop healing circles and heal everyone up at the same time. 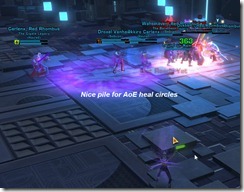 Ideally, you will want to have only one Lighting Field in Phase 1 or otherwise you might have trouble with the enrage timer.

The new mechanic for Ciphas in phase 2 is his leap & strangle. The initial leap to a random raid member deals ~ 6k damage and the strange after deals about 4k damage per tick. Tanks will need to interrupt Ciphas to stop the Strangle (red text message on screen) 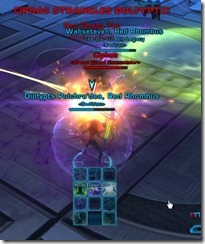 In addition to the strangle, Doom is now 3 stacks on hardmode. Watch your debuff bar carefully as sometimes running through a green circle may not clear it.

Reduces healing on target (tank) by 99% and any healing to this target will cause their health leeched to Kel’sara. Tank swap immediately when you see the red emote and stop all healing for 20 seconds to the tank (don’t use medpacks or Endure Pain!)

As it can be hard to see due to the intensive healing on this phase, tanks will ideally call out for healers to not heal them. You will also want to make sure that tanks are topped off before the Force Leech starts so that they have some leeway.

Force leech comes about 10 seconds after Ciphas is killed and comes after every Death Mark phase.

Three Dread Guard Legionaires will spawn in about the middle of the room  (might be more on 16m). The one in particular you have to kill ASAP is the one on the right (if you are facing the door behind the boss). He will cast Mass Affliction, which is a raidwide curable DOT that ticks for 1190 every second. That is a lot of raid damage and can be quite taxing for your healers so you will want to kill that particular guard ASAP. The rest of the Dread Guard Legionnaires are melee and will use Smash which deals for ~2.5k damage.

They have only ~7k HP on 8m so they should be killed as soon as they spawn. These Legionnaires are usually summoned a few seconds after Kel’sara marks someone for death so you can expect quite a few waves of them.

this has nothing to do with anything but what server are you on?

An interesting observation from last night’s Hard Mode run. Ciphas, Heirad both dispell “Sonic Barrier” – Really sucks being a jugg. As I have a hybrid build that keeps my force scream on a 1 sec cooldown and rely on Sonic Barrier to mitigate 20% damage. But I found that both bosses dispell SB as soon as I use force scream. Would be interested to see if other tanks get their defensive buffs dispelled

Tillian here from Oppression lots of great information. TY for all your hard work and effort to bring us this valued site

I play the goat