Kephess the Undying-Terror from Beyond TFB operation boss guide

This is the boss strat for Kephess the Undying, the fourth boss in SWTOR Terror from Beyond TFB Operation in Patch 1.4. Included are strats for storymode with hardmode coming shortly.

Phase 1 has very simple mechanics and is designed to ease you into the fight.

One of the tanks tanking Kephess will receive two debuffs and start to glow. When this happens, the other tank need to taunt Kephess so that the tank with the debuff can run to the glowing pool in the center of the room to cleanse himself (other players should avoid the pool).

Kephess will have a laser beam attached to him periodically throughout the fight. The tanks need to locate the pillar it is attached to and move Kephess to that pillar. 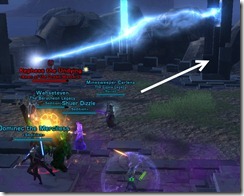 Soon after, you will get a red text message on the screen: Kephess Charges a Focused Laser Blast at Player X!

This is the cue for that player to either run behind the pillar or in front of it to squeeze out some additional DPS (but they must be  facing Kephess). Kephes will channel a 9 second Laser Blast, and the player will take damage (need heals) even if they are behind the pillar.

At the end of the 9 second cast, Kephess will be knocked to the ground for a few second and you can do increased damage to him while he is in that state.

You pretty much repeat this until Kephess is ~ 50%, which triggers phase 2.

There will be a big red circle in the middle of the room  to which Kephess make will a landing from the air. The landing will cause walls to radiate out from him but the walls move so slow that they are easy to avoid. 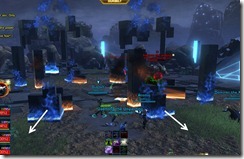 Phase 2 gets a bit more chaotic.

Kephess will put down a red circle on a random player that will follow the player for a second or two. The red circle will then disappear and then Kephess will jump down on the area the red circle was in previously while leaving an expanding blue circle. 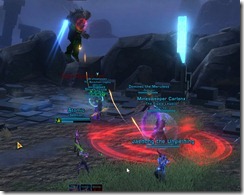 Players will need to run out from the red circle (it is fairly easy to avoid) and stay away from the blue circle to prevent damage to themselves. The blue circle is called Pulse Tremors in the combat logs and deals 1530 damage per second that the player stands in it.

When Kephess jumps to a player with the red circle, he may perform an AoE attack called Earthquake while being taunted back to the tank. This attack deals low raidwide damage (~ 600 damage).

Corrupted Nanites is a 30 second DoT casted on a random player that deals 1143 damage every 3 seconds (11k damage over 30 seconds). You will see a red text on screen: Corrupted Nanites on YOU! as well as a circle icon above your head. 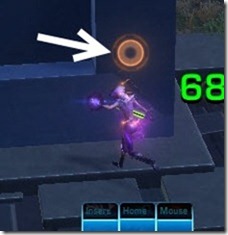 You can run to one of the clickable pillars and click it to channel a skill called Hypergate Tower to remove the Corrupted Nanites. Corrupted Nanites is removed as soon you start the channel (you can cancel the channel right away). The channel itself is a 13.5/14 seconds channel and the pillar will be destroyed if everyone on it either finish or cancel the channel. If Kephess near the pillar when it is destroyed, Kephess will be knocked down temporarily again, allowing you to do increased damage to him for a couple seconds.

Since Corrupted Nanites is removed as soon as you start the channel, a number of people can use the same pillar to remove the debuff if they keep the pillar alive (start channeling, wait for the next person to channel and then cancel your channel).

Phase 3 is triggered when Kephess reaches 10% HP. He will basically shoot mortars at the entire raid using a skill called Volatile Emission.. This skill is easily avoidable (orange circles on ground). In addition, Kephess will also does an raidwide AoE called Fury of the Masters that deals ~800 damage per second and serves as a soft enrage mechanic. 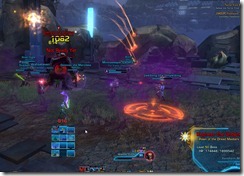 Due to the strict enrage timer on Kephess, it is recommended that you do not miss a single pillar in phase 1. You do not have to stand next to the pillar, as long you are under the electric line/beam connecting Kephess to that pillar it will work. 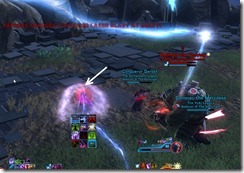 Also, make sure that the person being targeted by Laser Blast runs to their position ASAP so that Kephess gets 4 stacks of the damage increase debuff for maximize DPS.

Kephess’s Laser Blast deals quite a lot of damage in hardmode so it is essential that the targeted person gets topped off and receive dedicated healing from a healer. Sorcs/sages can also bubble shield them to lower the incoming damage. 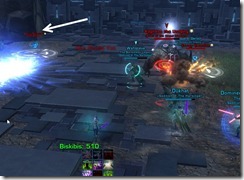 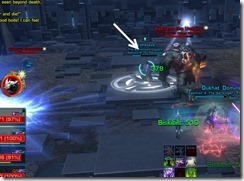 Each energy distortion have about 10k HP but they cannot be damaged by other players once they are attached onto someone. For that reason, it is recommended that DPS pick them up ASAP and kill them. Having them attached to tanks isn’t too bad as Kephess’s ability that cause tanks to glow will kill these energy distortions. Having these attached onto healers is generally bad as they will need to stop healing in order to kill them.

These energy distortions will do a pulsating AoE damage that increases in damage overtime. Failure to kill them in a timely manner will cause the raid to take large amount of damage.

Unlike storymode, the pulsating blue circle that marks where Kephess took off no longer exists. Instead, the red circle that Kephess places on a random raid member to indicate the position he will land is no longer avoidable. It deals ~19k damage to the targeted player. If the person is not topped off, they will most likely get one shot. Sorcs/sages should also place their bubble shield onto that person to mitigate some of the damage.

Needless to say, the person with the red circle should move away from the rest of the raid so they don’t take any unnecessary raid damage. 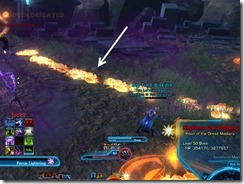 Kephess seems to have a preference for targeting the furthest person in the raid for radioactive barrage.

You phase 2 you will get 4 pillars to work with. The pillars, like in storymode, have a dual function. You use it to both cleanse Corrupted Nanites off players and breaking the pillars to knock Kephess down for increased damage. You cannot miss a single pillar here as doing so will most likely cause trouble with enrage.

Corrupted Nanites on hardmode do not fall off and will keep increasing in stacks (at 4 stacks it deals over 7k damage a tick) until it is cleansed with a pillar. Therefore, you have to manage pillars so you have one left for the P2-P3 transition but do not wait too long between pillars such that players die from Nanites damage.

Click on the pillar will immediately cleanse you of Nanites but the pillar does not break until everyone on it either cancel the channel or let the channel finish. On hardmode this channel is 6 seconds but might be shorter if you have alacrity (for me it is 5.6 seconds).

The way we manage our pillars (on 8m) is as follows

Phase 3 is basically a burn phase but Kephess also have two nasty abilities. We bubble shield all raid members before going into P3 and everyone pop medpacks etc to help survival. If you use the last pillar at 11-12%, you should get Kephess ~7% before he gets up and start phase 3.

One really easy trick for P3 is to have everyone but the tanks stack up on Kephess. Tanks will need to run around and dodge the circles but everyone else can just go full DPS on the boss.

Fury of the Masters

Circles on the ground that will target raid members and deals 5k damage to them if they don’t move out of it immediately.