This is the boss strat for Operator IX, the third boss in SWTOR Terror from Beyond Operation in Patch 1.4. Included are strats for storymode with hardmode coming shortly.

This fight on storymode is very relaxing and tests your coordination skills rather than throwing out big damage numbers.

Before the start of the fight, everyone will need to pick a color. On a 8m group, you will typically have 2 tanks, 4 DPS and 2 healers. You will want to pair a non DPS color and pick a color. You will end up with something like this

color A, B, C, D could be any of the four colors provided: blue, purple, yellow and orange.

Once everyone has picked, you will end up with something like this and ready to start the fight!

In phase 1, you will want to keep an eye on the Master Control in the middle, especially on the circle he is standing on top of. When that circle turns into one of the four colors, the healer/tank of that color will need to run to the circle and stand in it. The DPS of the pair will need to run to one of the console activated nearby and channel it. This will unlock two data cores on the outer rims of the room.

The sequence of the circles will be 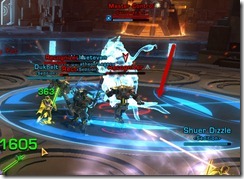 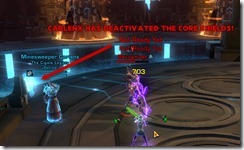 You will want to keep a tank healer/combo near the Master Control as there will be some Recognizer adds come running by to attack the person channeling the console. These adds have very little health and can be killed quickly. Rest of the raid can run to the Data Cores to attack them.

There will be two Data Cores activated per color pair. They tend to be on opposite sides of the room but you run slightly faster inside the room. 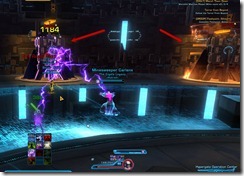 When you are down to the last two data cores, you may get a Regulator add instead of the regular Recognizers. He has slightly more health. 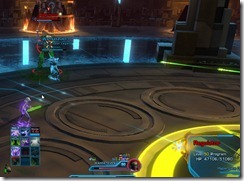 Phase 2 gets slightly more exciting. Master Control will disappear and Operator IX, a giant droid, will show up. Operator IX will announce periodically, Operator Response timed out, Please Repeat and start casting Black Obtuse, a 10 second channel. While he is channeling, the small circles around him will have colored circles and each person of the pair will need to run to the appropriate colored circle within 10 seconds. It is recommended that you do not stand in the smaller circles when fighting and do not run through them during the Black Obtuse stage. 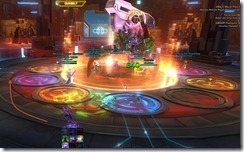 Running through the wrong colored circles may cause that circle to disappear, screwing other color pairs. In storymode you can get away with it.

In the event that one player of a specific color pair dies, the remaining player of that color will need to run to both circles during this stage.

Operator IX may have an aggro during/after Black Obtuse so tanks will need to taunt right before he finishes the channel.

This fight on hardmode is tightly tuned and is a lot of fun. Enrage timer is 5:55 – 6 minutes on Operator IX (phase 2).

On storymode, all the colored circles are given a 70 second window to kill both datacores. This is not the case for hardmode.

The trick to know the time remaining on each colored phase is to have the Master Control as a focus target. This will allow you to see his cast bar.

Tip for killing datacores: DPS killing datacores do not need to move back to thecenter after a color phase is over (unless their color is called). Instead, they can stay at the destroyed datacore and datacore that will be unshielded next is either to the left or right. This can shave off a few of those precious seconds.

It is not always bad to fail the time limit and for some phases like purple you may actually fail the timer on purpose to clean up the adds (explained below).

Consequences of not killing datacores within time limit

Not killing the two datacores for a color phase within the time limit will cause the Master Control to repeat that color phase (giving you more time to kill the datacores) but there there are two consequences.

1) Rectifier Spawns (you will get the following message on screen: Failed to Achieve Red Obtuse. Activating Green Bisector). Rectifier has 90k HP and a very nasty conal attack so he should be tanked faced away from other players.

2) Any adds that spawn during that color phase will spawn again (i.e. if you repeat orange phase for example, you will get two more champion Regulators.

If you have to repeat a color phase, you want to do it on the color without the Regulator adds. 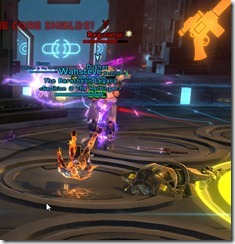 The reason we picked purple is because 1) only Recognizer adds spawn 2) 55 seconds is fairly tight and you don’t want to waste your DPS cooldowns and have nothing for the subsequent yellow phase.

Depending on your DPS, you may repeat the Yellow phase (last colored phase of Phase 1). If this happens, make sure you kill the Rectifier and Regulator adds first before killing the datacores to end Phase 1 or otherwise you will bring these adds into Phase 2 with Operator IX.

During each color phase, two color spheres of the corresponding color will spawn. Each person of the same colored pair will need to grab one and kill it to receive a buff. Players not of that color will need to avoid damage these spheres and accidently killing them (they only have 5K HP). 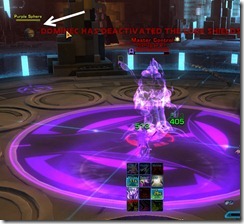 For example, during the purple color phase, two purple spheres will spawn. The two players with the purple color will need to each grab a sphere and kill it individually to receive a buff called Purple Obtuse. This buff is crucial for phase 2 and not getting that buff may cause you to wipe on that phase.

These color spheres of the previous color do not despawn when you transition into a new color, as long other players don’t accidently kill them.

Black Obtuse on hardmode is only 8 seconds (storymode is 10 seconds). This means that all the players should stack in the middle with Operator IX as that offers the shortest travel time to their circles during Black Obtuse. 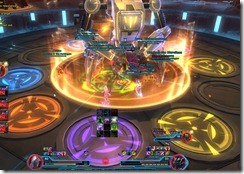 In the event that one player of a specific color pair dies, the remaining player of that color will need to run to both circles during this stage.

Operator IX may have an aggro drop during Black Obtuse so tanks need to make sure to taunt him near the end of his channel.

This is a 19k hit on a random player shortly after Black Obtuse and before Color Deletion Protocol. The cause of this attack is not certain but it was theorized to be some sort of aggro wipe/attack on person with the second highest threat. Disinfection can be rendered mostly harmless by having both tanks fighting for aggro immediately during and after Black Obtuse. This strat seemed to focus most of the Disinfection on tanks.

Color Deletion Protocol comes after Operator IX finishes channeling Black Obtuse. One random member of the raid (name will be announced in red text) will be targeted for deletion by a specific color. The person with that color buff will need to run to that person (who also have a corresponding color circle undernearth them). Doing so will protect them from the deletion protocol. You have 5 seconds to do this.

Since there are two players with the buff for each color, make sure you sort out who does the “protect” first as to not waste both buffs. If both players run in to protect, both of their buffs will be used up (see picture below). 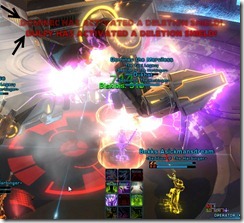 Make sure that the player targeted for deletion stand still and those without the corresponding color buff to protect that person move away.