Phase 1 is the boring phase of the two but easy to master.

You cannot damage the boss at this point but the damage you do to the tentacles will be transferred to the boss. For this reason, it is better to divided the raid into two groups and kill both tentacles individually. While this will take longer than having all the DPS killing one tentacle, it will deal more damage to the boss, resulting a bit shorter phase 1.

One tentacle will spawn on each side, but they seem to alternate in the position where they spawn. There are two possible positions: inside or outside.

On the inside position, the two tentacles are closer together and it is safe for healers and melee DPS to stand behind the tentacle while the tank grabs it on the other side. This allow healer and DPS to avoid most of the acid spit and the slam attack.

On the outside position, the two tentacles are further apart and it is safer for healers and DPS to stand diagonally from the tank, facing the boss. This will avoid most of the spit and slam attacks.

In terms of the Acid Spit, players close to the tentacle receive a buff that decrease their chance of getting the spit. You will assign one player (ranged DPS or healer) on each side with good situational awareness that stands in the back (away from the tentacles) to eat the spit and avoid the slam. 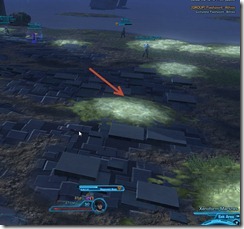 When the Tunneling Tentacle reaches 50%, two Unstable Larva will spawn on either side, beaming for the tank. Ideally, you will want the ranged DPS to kill them before they get to the tank and explode for massive amounts of damage. 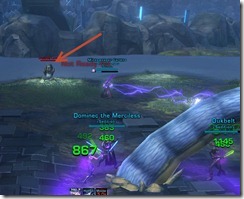 Once the Tunneling Tentacle is dead, the boss will channel Birthing, a 3 second cast. At the end of the cast, a bunch of Birthed Larva will spawn from the boss and headed straight for the shore. Your job here is simple: simply find a gap in the incoming Birthed Larva line and stand there, allowing the Birthed Larva to pass.  If you maintain a good distance away from them, they won’t bother you. 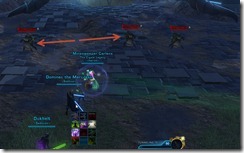 You will repeat the Tunneling Tentacle, Volatile Larva, and Birthing cycle until you get the boss down to ~44% (961 K). Your entire group will be then teleported to phase 2!

Range isn’t an issue for healing and attacking the boss. Even if your operation window tell you someone is out of range, you can still target them and heal them.

Proper positioning is crucial here. Generally we have the healers and tanks up top. This allow healers to keep an eye on everything while tanks can leave spit on a platform without hindering the traveling of DPS down below killing the tentacles. You will want a healer and tank pair go left while the other healer and tank pair go right. Tanks will want to grab their own platforms to handle the spit from the boss. 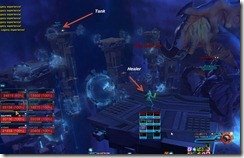 Terror from Beyond will spit at a tank, forcing that tank to change platforms and then immediately channel a spell called Scream (4 second cast). 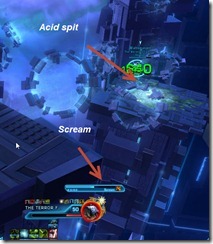 At the end of the channel, that tank will receive a debuff that causes them to take increased damage from the boss. The other tank will need to taunt immediately during the channel.

These tentacles are the things DPS need to kill to damage the boss.Two tentacles will spawn in the following two platforms first. All the DPS should focus burn one tentacle first (move away when the tentacle casts Slam) before moving to the other. 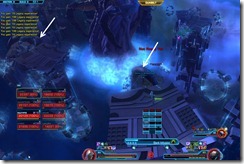 The other location the tentacles will spawn are the two platforms in the back once they are killed in the two front platforms. 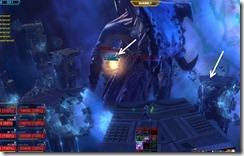 After killing the two tentacles, all the DPS should spread out as Hypergate Irregularities will spawn on a bunch of platforms. The top ones can be handled by tanks and healers while the bottom ones should be cleaned up by the DPS. They have only 9k HP on storymode.

After killing about 3 set of tentacles and 2 sets of Hypergates, the boss should reach 367k (~16%) and enter a Furious Tantrum.

Doing this stage, he will attack random players with Phasic Spittle, dealing ~11k damage. Tanks will need to taunt him back immediately. It is mostly a burn phase here. Once you get the boss down to 83k (~3%), the fight is over. 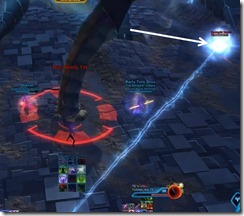 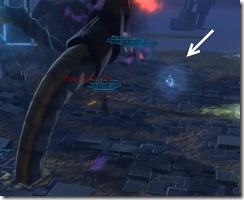 No matter how much damage you do to the boss in phase 1, he will reset to 50% HP on hardmode.

The first thing your entire raid team need to be clear on is the platform assignment for phase 2. 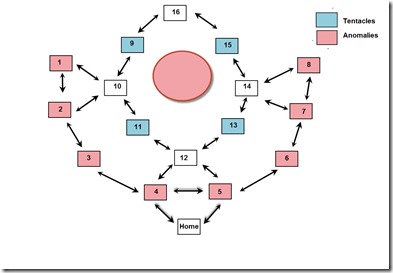 Tanking: One tank at each side, one tanking from platform 10, the other from platform 14. Tank will need to move to another platform for spit/acid and then move back to eat scream.

Alternatively, tanks can simply jump to platforms 1 & 8 to eat the spit. .

Hypergate Irregularity: Has a chance to spawn on all platforms except tentacle platforms.

Healers: Healers can sit on platforms, 3, 4, 5, or 6. 4 & 5 seems to have less issues with LOS with regards to tank healing and are preferred platfroms.

Quick way to get back to Home: This may or may not work for you but jumping off any platforms may have a chance to bring you right back to the Home platform or it may simply bring you to a nearby platform.

Similar to storymode, TFB will spit at the tank and then follow it with a channeled scream. The tank being spit at will need to move to a clean platform while other tank will need to taunt during the channel. Unlike storymode however, the scream debuff does not wear off by itself. You will need to travel back to the home platform to remove it.

Hypergate Anomaly is the new mechanic introduced in hardmode and spawns at 70 and 25% HP of each tentacle. This means that you will get four hypergate anomalies per pair of tentacles. Anomlies have a chance to spawn on any of the “red” platforms in the above picture. .

You can either split DPS on the two tentacles or focus DPS on one of the tentacles and leave the other one alone. Usually one DPS is enough to kill the anomalies that spawn. Anomalies do pulsating damage called Hypergate Instability that deals 1683 damage per second on 8m. If the anomaly spawns on a platform the healer is standing on, he/she should move off to a different platform (i.e. if it spawns on platform 4, move to 3 etc).

You have 17 (16 platforms + Home platform) – 4 tentacle platforms = 13 platforms to cover. On 8m you will need to assign healers and tanks to a platform and assign DPS to 2-3 platforms.

Here is an example of platform assignment for my 8m guild. Healers have platform 3, 6. Tanks got platform 16, and 14. Two of the DPS got 2 platforms while the other two got 3 platforms (they co-cover the home platform). 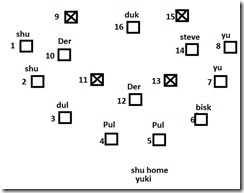 For a 16m raid, you have a much easier assignment as you can pretty much assign a single person to each platform with extras to spare.

Furious Tantrum starts once you have 3 pairs of tentacles down. During this phase, everyone need their own platform as the boss attack damages an entire platform. He will casts Phasic Spittle (hits for 16k) on a random raid member and then switches to someone else. He needs to be taunted by the tanks back and forth (make sure the other tank take a bit of damage before you taunt it back) as he aggro wipes frequently.

While the tanks are juggling the boss’s threat back and forth, all DPS need to pop their adrenals, buffs, etc and max burn. Remember, the boss dies at 3%!