Here is a list of information related to HK-51 Companion Droid for those curious about his stats, weapons, combat animations, etc.

HK-51 comes with higher base Cunning compared to other stats and can use both Aim and Cunning. The default gear that comes with HK-51 is Aim based. 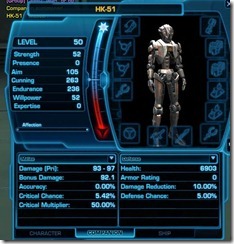 However, here is a datamined codex entry for HK-51. It lists the following for primary stat

HK-51 uses Knife for his offhand and either Sniper or Blaster Rifle for his mainhand.

HK-51 have a couple of very cool abilities. Assassinate, especially, can basically one shot a strong mob (or below).

Like other droid companions, Hk-51 has the following slots for armor

You will get an initial conversion with HK-51 right after you have acquired him. Rest of the conversation are unlocked at the following affection numbers

Once obtained for one of your characters, HK-51 can be unlocked for other characters on your legacy for 1 million credits or 350 Cartel Coins per character and will scale to that character’s level. You still  need a L50 to acquire HK-51 first.