Guide on defeating Dreadtooth, the new world boss on Section X, at difficulty from 1- 10 stacks. .

Dreadtooth spawns and roam around on a circular pattern in a fixed location in  Belsavis Section X area. Quickest way is to purchase the legacy perk for Black Hole daily area and then click on the shuttle to head to Section X. Generally you can find him in an open area on the NW side of the map (i.e. Crumbling Wall section of the map).

Difficulty is dependent on the stacks of Dreadful Resurgence Dreadtooth has. 1-2 stacks are designed for 8m, 3-4 stacks designed for 16m. At 5 stacks, be gain a buff called Frenzied and requires a 24m raid to kill him. At 10 stacks, he gains a buff called Nightmarish and drops the amulet required to unlock the secret boss in 16m HM Terror from Beyond. The difficulty increase from 5 to 10 stacks isn’t too big so most guilds can just jump to 10 stacks if they can defeat Dreadtooth with 5 stacks.

Dreadtooth will drop 1x Dreadful Essence when killed that can be used on Dreadtooth to increase his stacks by one per use. He will reset to 1 stack of Dreadful Resurgence each time he is killed.

At 1-2 stacks, Dreadtooth will drop 1x Black Hole piece (random), 1x Dreadful Essence, 1x Dread Guard’s Corrupted Mask, 1x Molecular Stabilizer. The mask is essential for the secret boss, Dreadful Entity, in Terror from Beyond but not needed for Dreadtooth. 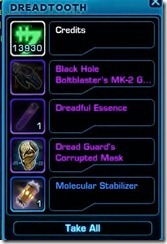 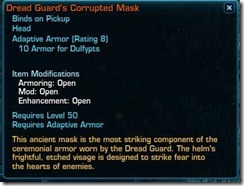 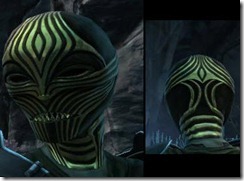 As of Patch 1.7, Dreadtooth killed on 10 stacks have a 100% chance to drop Dwedtoof pet, which requires Champion standing with the Section X reputation folks to use. 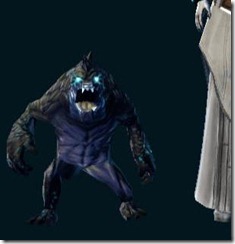 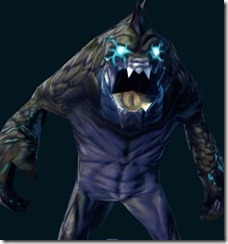 This fight is a bit healing intensive and at higher stacks will become a healer check due to the amount of AoE raid damage. In addition, proper positioning of Dreadtooth (i.e. tank against a wall) is essential as Dreadooth will toss tanks miles away with one of his abilities otherwise. Dreadtooth also cleaves so no one should be standing in front of him except for the tank.

1-2 stacks can be done with 1 tank and 2 healers but higher stacks will require 2 tanks and more healers. Generally, for 5-10 stacks, you will want 8 healers to deal with the raid damage, 6 of them preferably are sorcs/sage for their AoE bubble heal.

Dreadtooth have two phases in which he will throw different abilities at the raid. Phase 1 is from 100% to 50% and phase 2 is from 50% to 0%. Phase 1 is generally much easier and quicker than phase 2. Tanks do not need to worry about phase change as Dreadtooth will do the same Sonic Paralysis attack regardless of the phase. 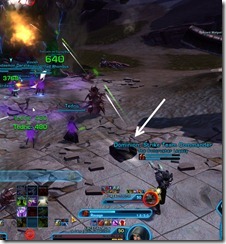 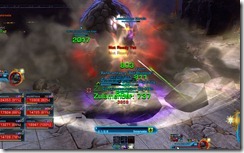 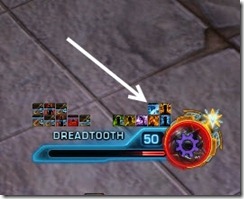 There are two types of Ground Spike here, distinguished in the combat log by the type of damage they deal. The Ground Spike dealing kinetic damage is the avoidable red circles with actual spikes coming out of the ground. The Ground Spike that deals elemental damage is the unavoidable Rock Toss like attack that is directed at the general raid and no longer aimed primarily at ranged characters (unlike phase 1). Both versions occur after electrified wears off and before the next Shriek occurs.

1-2 stacks is really easy and can be done with 8 people or less. You will want two healers, one dealing with AoE damage from Smash and Ground Spike and the other more focused on tank healing.

Rock Heave have a castbar and there is no Electrified buff on Dreadtooth or Exhaustion debuff on the tank (allow you to kill it with only one tank as long they taunt Dreadtooth back in time after the Sonic Paralysis threat drop).

This video is from PTS with a kill of 2 stacks. Will be updated soon with a live server video soon.

5 stacks give Dreadtooth the Frenzied buff and requires a 24m raid with 7-8 healers (ideally 6 of them should be sorcs/sages for their AoE bubble heal).  You will also need two tanks to tank swap during/after Sonic Paralysis. Dread Guard (Q63) gear is highly recommended.

For phase 1, you will need 3 ranged DPS position about  25m away from the boss to eat Rock Toss. These ranged DPS will need a dedicated healer that will bubble, heal and cleanse them after each Rock Toss. Have 2-3 healers on dedicated tank healing duty. Rest of the healers should focus on bringing the raid back to full health after each Smash.

For phase 2, the same 3 ranged DPS should stay out and try to direct the Ground Spike onto them if possible. They will need to run back to the boss to get AoE heals during Shriek. Raid will need to stack up during Shriek for AoE heals , STOP DPS and spread out during Electrified. During Ground Spike, your raid will get two circles. Whoever get hit will need to cleanse themselves immediately or call out for cleanse if they cannot do so themselves.

10 stacks Dreadtooth has the Nightmarish buff but he isn’t too different from the 5 stacks. If you can kill him at 5 stacks, there is a very good chance that you can down him at 10 stacks with some practice. You will want 2 tanks, 8-9 healers (6 of them sorc/sage healers if possible) and rest all DPS.

Dreadtooth has about 400k more HP and hit slightly harder. He will cast have 3 circles down during Ground Spike that your raid will need to avoid.

Shriek does 18k damage over 6 seconds, Ground Spike (kinetic), the red circles, deals 12k damage and the Ground Spike (elemental) deals 10 k damage. The goal is to lessen the raid damage as much as possible and cleanse the DoTs.

Would you say that with 1-2 stacks an 8 man group would need black hole/campaign or possibly rakata/columi mix. Also, is there a debuff or something like on NP that would prevent a full ops of 24 to take him on?

well on the pts we did it with a mix of rakata/campaign and it was very easy. There isn’t a debuff as far as I am aware but the Drouk Hunter buff might be limited to certain amount of players

The Drouk Hunter is limited, we have been attempting 3 stacks and we originally went with 24 people to attempt an overkill, alas…8 people did not receive debuff and died, leading me to believe only 16 can do fight. Also…when engaging fight make sure to have everyone do an auto attack on him (including healers) immediately upon pulling, this ensures everyone gets the debuff, otherwise is seems the people who waited for aggro to be built before attacking or the healers are not getting the debuff and dying immediately. Hope that helps and get us 3 stack Vid…..WE NEED HELP :P, thanks dulfy for all you do, log on your site daily.

We had 23 and managed to down 3 stacks no one received the debuff.

The buff is just buggy that’s all. Try to stay within 30m of both the tanks and the white circle when the tank pulls, and do not attack until you get the Drouk Hunter buff. Also make sure no one is PvP flagged as it seems to greatly increase the chance you will get Dread instead of Drouk Hunter.

Got to ask does that helm work with Hoods or they just dropped the ball on that one again? :/

Also happy to know they didnt kill having to stealth in combat for dropping agro and etc. with that 2nd buff.

Yeah they have still dropped the ball on the hoods/helm thing…..go back to Torchlight though, hear that’s not a problem there.

It does not, when I wear it my hood disappears.

It cannot, when I wear it my hood disappears.

Thank You for always doing what you do. Providing this kind of info always makes your site almost a daily checkin when I hop online. <3 1 quick question I had was is there a lockout period for this WB or is it like just farm all day status lol… Thanks in Advance

appears to be farm all day status.. 30 min respawn as long there is no other groups trying to kill it

You always come through for us! Thank you Dulfy! <3

You can zerg the boss on 1-2 stacks

Watch where you walk in his area, one of the daily mission is in that area, I didn’t know it was him and he one shot me.

dulfy can we get a video of you guys doing the 3-4 stack one and what is with the white circle? my group is set up liek your but when they go in 2-4 people get dread debuff

anyone know anything about the white circle and what it does. ive heard it decreases damage taken from shreik but have yet to notice a drastic change in damage when inside of it in previous attempts (at tier 1)

I’ve noticed that people more than 60m away from the circle seem to get “Dread” and die instantly so maybe the circle is good rather than bad?

what dreadful guard used for once you have the dread mask? protects from drea
d touch?

Dulfy, it would be great to have a chart of the various stacks and the health/loot/suggested group size for each. 5-stack was just killed: http://www.swtor.com/community/showthread.php?t=590445&page=2.

Is there a particularly good time to use interrupts or is he immune?

Hi Dulfy, is there any reason why you guys are spread out for the 2nd phase. When we do it in my guild, we all just stand right behind his feet. Then all move when the red circle hits the ground. Did you ever try it like that and decide it was easier to move 2-3 ppl rather than everyone. Or is there anything else I’m missing? Thanks

It is for the Ground Spike (Elemental), which deals random damage to the raid and anyone nearby

The section on the proximity buff needs to also have the Dread debuff details added for any groups that are waiting around for their turn.

Is a 24man raid needed anymore for the 5 and 10 stacks with the post-2.0 gear? If yes, would Underworld be enough or is it an overkill already?

Dreadtooth can be defeated at 2 stacks with (66) grade Gear? thx

Dwedtoof was looted on a 7stack kill

Is the boss very Buggy or what is the issue with the “Dread” debuff? We were 6 on a group and went to kill him and 4 of us got the debuff even if we were less than 10 meters from him and we all attacked at the same time. Is there a reason on why we got that debuff? Thanks

Flagged for PVP most likely.

That was it. thank you

Tried this sucker out with a pickup group and got our asses wiped 3 times. Thanks for the info.

Dreadtooth solo’d on 10 stacks with a sage

So.. screenshot of the kill?

I remember when this required actual tactics instead of ‘mash the attack button’.

How many mask the dreadtooth loot in 5 stack pls?