GW2 Shadow of the Mad King Mad Memoires Act II quest guide with detailed walkthrough. Click here if you did not do ACT I yet as you will need to complete ACT I first.

Look at your Mad Memoires Book, it will say the following..

A recollection of the life and deeds of Mad King Thorn, as recounted by his loyal subjects and friends. The volume ends with the coronation of King Thorn. It seems incomplete..

– Stories yet untold despite the power that marks a spooky site. When humans flee their homes of old, where they settle cannot be told.

Go to Gendarran Fields, Ascalonian Settlement and then locate the location indicated by the arrow (use the dotted line if you are unsure). If you use Corporeal Field scan (4), it will reveal a suspicious location. 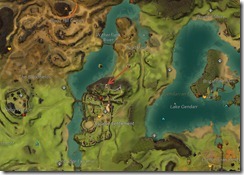 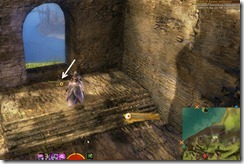 This will trigger a new event called Drive Back the hands of the accused thieves. Completing the event will trigger the spawn of Cashel, who will hand you Mad Memoires VIII: Handless

The clue revealed in the book is ..

To go Harathi Hinterlands, and go to the POI called Matyr’s Tomb in Ruins of Holy Demetra. Here you will see a Statue of Dwayna, clicking it will tell you to /kneel. This will spawn another ghost called Emissary of Dwayna. Use your candy meter near Emissary of Dwayna, press 3 (Etheric Scan) to spawn Fenn who hands you the book! 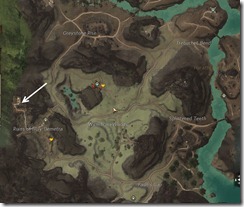 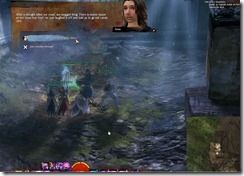 Here is the hint given for the next site…

These old bones are caught in the gullet, where laughing rises from sorrow (site #7)

Go to Bloodtide Coast, head to Laughing Gull Waypoint. There is a sunken ship to the left of the island. Use Aqueous scan #1) There is a suspicious location clickable gear. Click it and a Haunted Door will open. An event will start to kill Mad Realm NPCs until a Veteran Candy Elemental spawns. After his defeat,  talk to Seamarshal Bennu to receive the Mad Memoires IX: Pains of Love 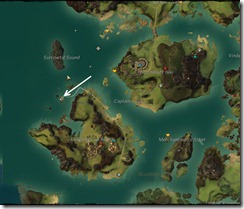 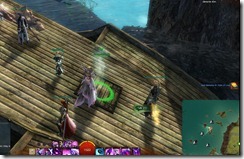 The clue given is The landing at Arca struggles to fill its storeroom so it will never starve again (#8).

Go to Harathi Hinterlands again, this time head to Seraph’s Landing waypoint in the NW corner, you will need to go a bit south from the armor repair guy and go up the stairs. Up top is store room with hay and pumpkin. Use your candy scanner here (Scan Corporeal Field #4) to reveal Rufus who will hand you Mad Memoires X: Tax-o-Lanterns. 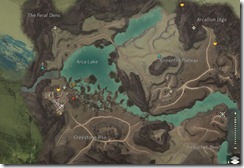 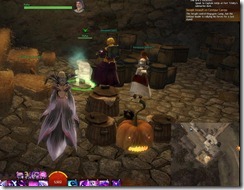 Clue given: Green is the color I want to remember. Not the red of flames or the blackened plateau. The Bridge, even it was green (site#9)

This one is also in Harathi Hinterlands. Go to  the northeast bridge that spans over Arca lake.. Use your scanner (gaseous scan #2)  there to reveal a suspicious location on the bridge to start the flaming ghost event.  Use aqueous scan to find suspicious spots to reveal buckets of water to douse the flame on the ghost.  Anyways, the ghost is Portia and she will hand you the book Mad Memoires XI: Flames of Renewal after she gets doused off (some players reported able to run up to her and grab the book before they die form the fire damage if they can’t find a way to douse her off). 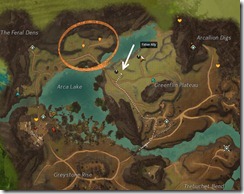 Clue given: Walk in cadence with King Thorn’s shattered subjects. They keep their hatred deep within (site #10)

This one is in Sparkfly Fens, under the crypt below Fort Cadence, inside the Shattered Keep. Go all the way to the bottom of the crypt. Here use your scan #3 (Etheric Field) to to reveal a suspicious location near the torch. 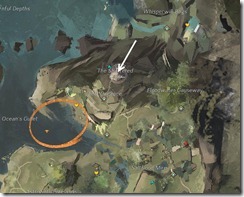 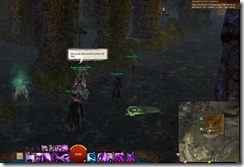 Now you are done! Head back to Lion’s Arch and hand everything back to Magister Tassi

Blimey you’re quick to start this!

my bad, correcting it now. it is indeed fenn.

This is wrong. You use the candymeter at the Emissary of Dwayna and then an NPC called Fenn spawns who gives you Book 8.

I didn’t use any scan. I knelt at the statue and then talked to it and it gave me the page.

talk to fenn, not dwayna

Use your Candymeter. Dulfy’s post is wrong, Emissary of Dwayna does not give the book, an NPC called Fenn that spawns on top of her does. It’s very confusing.

Is site #7 the Pirate jumping puzzle in LA?

Ok, you have to talk to Fenn, but you have to summon him with the scanner by pressung 3 (Etheric Scan)

Been there, haven’t found anything 🙁

have found this site: go to sparkfly fen, and go into the crypt/tomb at north fort cadence. when there on the bottom floor, south wall on a column there is an unlit torch. scan there for page 12.

Give Bloodtide Coast and Laughing gull island a shot 😉

leaning towards this as well. can’t really find a place or remember a place thats full of bones or anything here though.

On a ship between sorroful sound and laughing gull island

9th page is in bloodtide coast, laughing gull waypoint, on a half sunken ship on the northern part of the island.

Maybe it’s in one of the gullets? Ocean’s Gullet and Gasters Gullet

Page 9 – Bloodtide Coast, Laughing Gull Waypoint. Go to the half sunk ship in the water north of the island. There is a suspicious location clickable gear. Click it and a Haunted Door will open. An event will start to kill Mad Realm NPCs until a Veteran Candy Elemental spawns. After his defeat, Seamarshal Bennu spawns who gives you page 9

The third one is in Bloodtide Coast, Sorrowful Sound. Go south from Sorrowful Waypoint and the ghost can be found on a boat wreck, Seamarshal Bennu. The ghost was already there for me, but I assume you use the aqua-related scan.

4th one is from Arca Waypoint in Harathi.

Page 10 – Seraph’s Landing Waypoint in Harathi Highlands. Go South of the Armorsmith icon (The “helm” icon on the map) and go up the stairs. There is a storeroom with hay, use your candymeter to find the ghost NPC Rufus.

any idea what the acra reference is?

Clue from 10 – “green is the color i want to remember. not the red of flames ofr the blackened plateau. the bridge, even it was green.” any ideas?

Page 11 is still in Hinterlands, southern side of the northern most bridge over lake Arca, she’s on fire, basically, just south of the stand of 3 trees on the western side of the road just before the bridge. There’s an event to extinguish the flames, but water buckets don’t work. You can roll into her real fast and spam talk before you get killed to get the next page though.

uh, meant eastern side of the road just before the bridge.

Yeah I dunno what to do. Spamming her doesn’t work. And I can’t find any buckets. >.<

To get water buckets, use your candymeter to reveal a shiny near the ring. Putting out the flames with that bucket works fine, but you must put out the entire ring…

Page 11 is in Harathi as well. Take the Arcallion WP and go SW to the bridge on your map. it is covered in green moss. Portia the ghost is surrounded by flames here. Kill nearby NPCs to get buckets of water to douse the flames. When they subside, she hands you page 11.

have found this site: go to sparkfly fen, and go into the crypt/tomb at north fort cadence. when there on the bottom floor, south wall on a column there is an unlit torch. scan there for page 12.

Thank you for the credit above.

the seraphs landing is in NW corner, no NE 🙂

Thank you so much for updating so fast; must be really stressful.

X is in NW not NE, thanks for guide 🙂

With the ghost Portia in Harathi Hinterlands, we tried an aqueous scan which seemed to douse the flames…

For page 11, during the flame event, you use aqueous scan to find a susicipous spot and that spot allows you to pick up buckets of water to douse the flames

For page 11, during the flame event, you use aqueous scan to find a suspicious spot and that spot allows you to pick up buckets of water to douse the flames

Does this change the book’s appearance or stats in any way?

Oh wow, just saw a vid of it, very nice!

Thank you for compiling all this .
Tons of help..saving alot of unneeded aggravation:)

– The fort name is Fort Cadence, not Fort Cadenza 🙂

Just a small typos, that are a tiny bit confusing, but as always, a great guide anyway 😀

thanks for pointing them out, wrote them in a hurry 😀

woah, thanks for the catch, I really thought it was mad memories, and didn’t know it was memoires. that made sense

Thanks a lot for the guide, it was very helpful! 🙂

Thanks for all the help 🙂 Nice job!

Can this be done on a low level (like 10ish) with help from a higher level?

if you have some of invis or have a group of high levels to clear the area before you enter it then ya. Bloodtide Coast/Harathi Hinterlands areas have alot of mobs

Man this is such a pain. I doubt I’d have a group. I guess I’ll see what I can get together tomorrow night. I definitely want to make this book flame, so I’ll have to do whatever it takes to get it done.

Thanks for the reply, Dulfy. Much appreciated!

I did as a level 27 ele, its a bit hard but not impossible

This is an awesome walkthrough. Thanks 🙂

Again Duffy you do good..

I cant do part one, Tassi wont let me deliver the first five pages. Any advise about this? I cant find anything on this and this is a problem my friends have too. 🙁 Ok, nevermind. Its six pages and i just misread it all. <.<

Thanks Dulfy 🙂
I made a video guide out of this xD
http://www.youtube.com/watch?v=qF_Xltpc_Do

I did this at lvl-18, was a complete bitch, but still managed

Did you do it alone or with others? Trying to gauge at what level I can complete this darn thing.

WOOOHOOO just did it, fuck yeah dude, act 3 in 20 mins

do spam your shit somewhere else. you are banned

Is there a point of keeping the old book once you get the upgraded one?

not really. You can transmute it for appearence etc

Is there a part 3? i saw someone link a Yellow rare Version of the Book cape.

How do you get to Sparkfly fens? I can’t seem to find the way

Thanks again, with this guide you got me to the end of a task I probably wouldn’t have bothered attempting on my own. Cheers!

I have the regular Mad Memories book. Will I be able to complete act 2 in 2014? Were people able to do it again in 2013? I want the fire effect on it.

The one by the graveyard just outside Divinity’s Reach isn’t showing, though. Maybe it’s somewhere else..?