Nightmare Explosive Conflict EC Operation guide for Zorn and Toth with detailed strategy and video. Zorn and Toth is the first boss in Nightmare EC and doesn’t have a lot of additional mechanics compared to EC Hardmode. A medpack and good situaitonal awareness is required for this fight.

As soon as you engage T &Z, everyone in the raid will receive an uncurable DoT called Baradium Poisoning that can be only removed by using a medpack (any size will do, buy them from the repair droid if you don’t have a reuseable one). Of course if you use a good medpack it will recover more of the health you lost and put less stress on your healers.

Baradium Poisoning at deals 2.2 –2.8k damage every second until removed and will kill someone if they don’t react fast enough.

Tip: Watch for the icon on your debuff bar and use your medpack as soon as you see it. Sorcs/Sage should bubble everyone before the fight and if everyone is quick to use their medpack, the raid will not take any damage as the sorc/sage shield will absorb most of the damage.

In hardmode, you could probably get away with DPSing just a bit more when the red circles land below you and then move out of it. This is no longer the case in Nightmare mode. There is very little reaction time between the red circle and the spikes from the ground (12-17k damage). 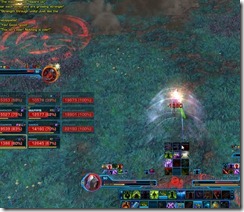 It is best to just keeping during this phase and don’t run into other players (incase you run into a red circle dropped on them).

Tip: Have Zorn on focus target with castbars enabled. Red circles will begin 6-7 seconds into the channeled Sonic Paralysis and ends when Sonic Paralysis has finished channeling. This way, you can stop running around the second the phase is over to help meet the enrage timer.

Toth’s Smash now has a knockback component as opposed to just raw damage. This isn’t really a big deal as melees tend to be on Toth’s side and they can just use their gap closers (i.e. force leap) to get back in. This can be a bit annoying for the healers but they can put their backs on the wall (just make sure you don’t eat the cleave from Toth when you do that).

Toth also receives a buff called Nightmare Berserk during the Berserk phase that reduces the damage he takes by 50%. This should balance out the increased HP that Zorn receives but you will still want to make sure to even out your DPS between the two and kill them roughly at the same time (Toth first, and then Zorn).

Handler Murdok is still fairly easy. The only differences is that he now can’t be interrupted (has the immunity to interrupt buff) so make sure you get out of the red circles and face him away from the raid so that his conal doesn’t hurt the rest of the raid.

Pretty much everything you did in hardmode still applies in Nightmare. Use the same strat/positioning you used in hardmode should work fine here. This section is used as a refresher on the hardmode EC mechanics if you are unsure.

Thanks for the strats, will not die on first try with Baradium Poisoning ^^

have they increased the credit drop on the trash in ECNM

I know this isn’t entirely related but are the servers still down 2 hours past due?

I’m not really impressed with the “change” occured to this encounter. While it is “more” difficult I would have thought, for the time they took to implement, you wouldn’t have entirely the same mechanics but more mixed up with new stuff…

wait til you get to the tanks

lol at the guy raging at you by whisper near the end there.

lol he meant to sent it to someone else

Something else we noticed last night in our kill… when berserked, Toth takes 50% less damage… that’s probably why they bumped up Zorns health, to account for the DPS difference during the Berserk phases. If you watch Toth’s buffs, he’s got a new one called ‘Nightmare Berserk’ that accounts for this DR.

Oh, and the other big thing we noticed was that the handler guy who jumps down after the 2 doruks are dead can no longer be interrupted, so you have to run out of AOE reticules and just heal through his crap.

yup, just killed him and can confirm this as well. ty 😀

What is that parser you’re using ? 😛 i’d like to know

Also maybe worth mentioning the slow on whoever gets the yellow circle. If its a non sorc dps on zorn side it can be tough to make it to toth in time

Here is a better version of the video I posted before.