A comprehensive guide to all the new GW2 ascended gear (backpieces, amulets, rings, accessories), and infusions. Updated for the Nov 28, 2013 patch.

You can upgrade and downgrade mist essences

You can upgrade ascended rings into infused versions

Note: If you upgrade any of the backpieces from the basic Ascended version to the Infused, you will lose the infusion you applied to it. Therefore, it is better to wait for the final version to apply any fancy infusions.

There are now 2 methods to make Ascended backpieces. The first method is via grinding as it uses about 1835 fractal relics from the Fractal of the Mists dungeon. The second method is via mostly gold as you need a lot of globs of ectoplasm and T6 fine crafting materials. 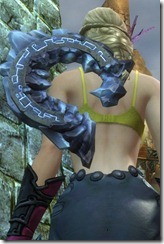 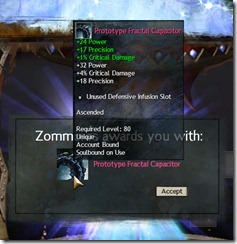 The Fractal of the Mists vendor sells exotic version of the Prototype Fractal Capacitor for 1350 Fractal Relics. There are 4 versions with different stats 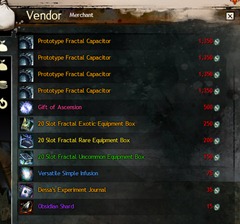 The vendor also sells Gift of the Ascension for 500 Fractal Relics.

Now, you need to take both items (1850 relics in total) to the mystic forge and use the following recipes to make the Ascended version with either Offensive or Defensive slot (it is opposite of books/quivers with crystals and philosopher’s stone)

Note: Both Philosopher’s Stone and Crystals are brought from Miyani near the Mystic Forge in Lion’s Arch. Vial of Condensed Mists Essence is a rare drop from the Fractal of Mists Dungeon

Note that this places an agony infusion slot on the backpiece in addition to the infusion slot from the ascended Prototype Fractal Capacitor. This slot is empty if you have created an infused version after the Nov 26, 2013 update. If you have done this before the update, it is filled with a +5 Agony Infusion. 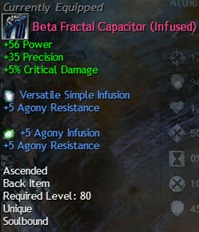 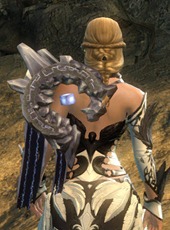 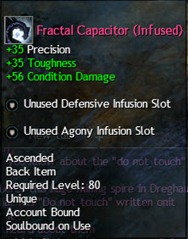 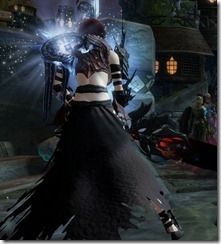 This method makes Ascended books and quivers and it is fairly expensive due to the amount of Glob of Ectoplasm and T6 Fine Crafting material it requires (especially if you are making the one using the Vial of Powerful Blood).

Since the Nov 26, 2013 update, players can now use 250 Bloodstone Dust instead of 1 Vial of Condensed Mists Essence to make their ascended backpieces. Infusing them, which adds the agony resist slot, still requires Glob of Coagulated Mists Essence.

Note: Both Philosopher’s Stone and Crystals are brought from Miyani near the Mystic Forge in Lion’s Arch. Vial of Condensed Mists Essence is a rare drop from the Fractal of Mists Dungeon 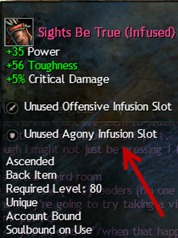 Quivers – All with Offensive Infusion Slots

All of the quivers below share identical appearance and contains Offensive Infusion Slot. The Infused version contains an agony infusion slot that allow you to place agony resist infusions onto them. 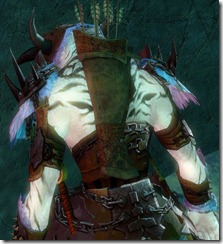 Quiver of a Thousand Arrows

Books – All with Defensive Infusion Slots 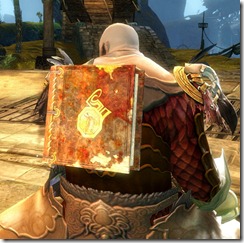 There with Yakkington: A Traveler’s Tale

Tome of the Rubicon

With the Nov 26, 2013 update, all infused ascended items (rings and backpieces) have a new agony infusion slot in addition to their regular infusion slot. This slot is for agony infusions only, which are dropped from the final boss of each fractal and can be upgraded by Artificers. If your item was infused before the Nov 26 update, they are automatically filled with +5 agony infusion. If you infused them after, this slot is empty. 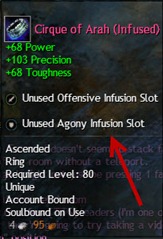 The basic +1 agony infusion is dropped from the final chest of each fractal but can be also brought on the Trading Post. 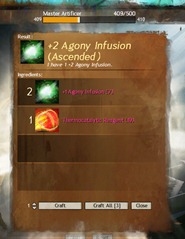 Note: Eldritch Scoll is purchased from Miyani near the Mystic Forge in Lion’s Arch. Karka Shells, Passion Flowers, Passion Fruits  can be brought on the trading post, obtained from the new Consortium Chests, or harvested/dropped from Southsun Cove.

Regular infusions purchased from the laurel vendor (basic stat only)

The vendor is located just outside the WvW portals in Lion’s Arch. He sells 3 types of infusions, none of them containing any agony resist. They are defensive, offensive, utility types. Note that the utility infusion slot only exist on amulets.

There are three methods to obtain ascended quality rings

Starting with tier 10 and above, players can receive a daily bonus chest from completing even tiers containing an Ascended quality ring. At tier 20+, players can receive an Infused version of the Ascended ring (already comes with agony resistance). With the Wintersday update, players who are doing tier 26 and higher fractals will only receive infused version of ascended rings through the daily chest (i.e. non-infused Ascended rings will no longer drop from the daily chests at tier 26 and above). 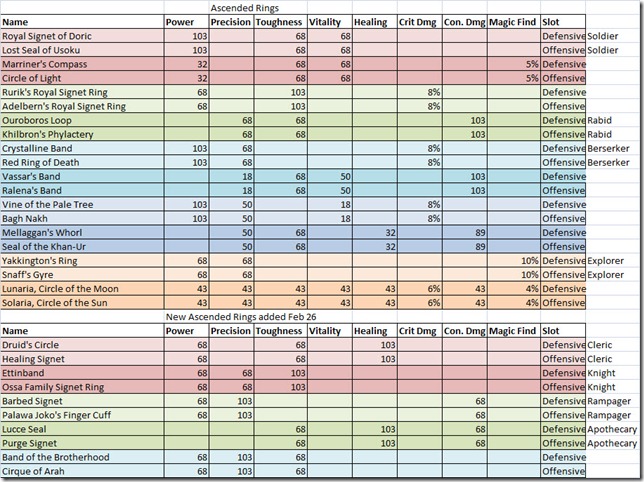 Ascended amulets were introduced with the Flame and Frost prelude patch. Currently, the only method to obtain them is via laurel vendors. Laurels are earned from daily and monthly achievements (1 laurel per daily, 10 per monthly). All Ascended amulets cost 30 laurels each and contain either Defensive, Offensive, or Utility infusion slots.

Here the list of ascended amulets and their stats combinations 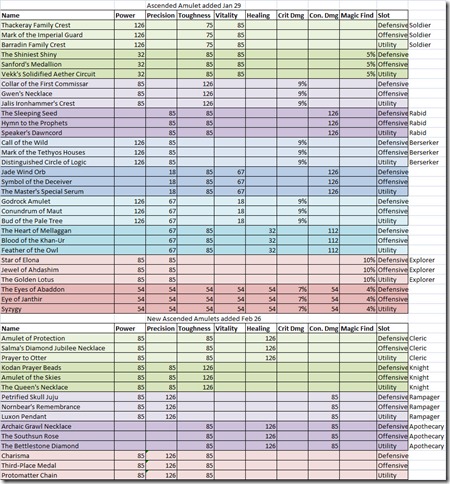 Ascended accessories were introduced with Flame and Frost: The Gathering Storm February path. There are two ways currently to obtain them. You can purchase them in the Guild Commendations vendor near the bank in Lion’s Arch for 5 old and 12 Guild Commendations earned via Guild Missions. Alternatively, you can purchase them from the laurel vendor at a price of 40 laurels and 50 Globs of Ectoplasm.

Here is a list of Ascended Accessories and their stat combinations. Note that like rings, you have two accessory slots. 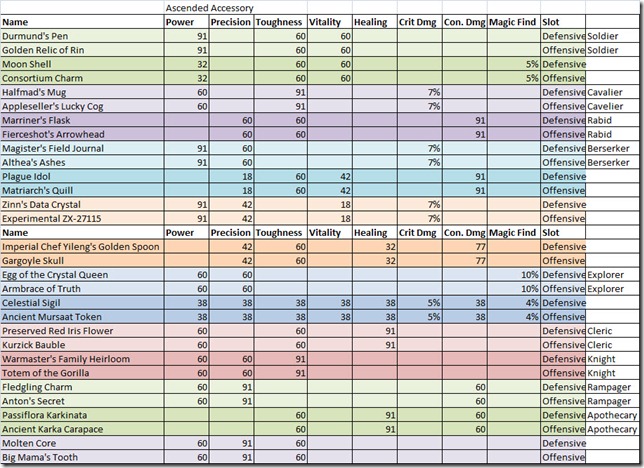