You need to make donations to receive Captain’s Council Commendations. Go to Miyani right by the Mystic Forge in Lion’s Arch and purchase a donation packaging for 1 silver and 4 copper 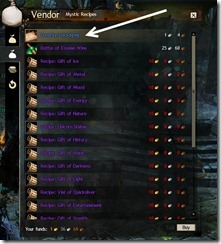 Now, you can throw 3 items + donation packaging into the mystic forge to get Captain’s Council Commendations.

Talk to Lionguard Lyns at the Grand Piazza where the Lion statue used to be. You will need to have some commendations first to unlock the vendor. 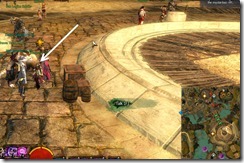 Note that these weapons are not unique! Their models can be purchased for 9.8k karma each from the Lionguard cultural vendor just north of the WvW portals in Lion’s Arch

Tips and tricks from readers

Here are some tips and tricks shared by readers on dulfy.net that you may find interesting. Feel free to add : )!

Putting in three level 80 exotics gives you 40 Crates of Commedation, which have 50 Commedations each.

thanks! I got only 12 crates of commendation when I put in 3 L80 exotic weapons though..

I guess it’s only exotic trinkets then. I just assumed all exotics would give the same results.

So why even bother with all that work if you can just buy the stuff with karma?

Can you pick up Karka slaying sigils elsewhere?

New people may have the gold… but not the karma.

When I look at the auction house prices on the cheapest of these items, no matter how I add them up this doesnt seem like an economical way of getting lvl 80 exotic weapons. On my server the final price will range from around 5-7g. Meanwhile I can buy an equivalent item for under 3g. If I just wanted the skin I’d be better off getting the lowbe cultural for 9.8k karma. Can anybody correct me on this?

you are correct, this is not the cheapest way to get the skin or the exotic weapon.

Also tuning crystals can be used along with food. It was a good way to get rid of all the crystals I made while leveling artificing. Potions, unfortunately, do not work.

oh cool, good to know, how many you need to put in with the food?

You should note that the exchange rate for donations works for armor as well. Rare/exotic armor is generally less expensive on the TP than weaps, so it might be a good way to pick up some extra commendations. Level 70-75 exotics are generally less expensive than 80’s, and give almost as much back in commendations. Rough calculating shows that 3 exotics @ 75sp each (total 2.25 gold) equals 550 commendations while it takes 4 sets of 3 rares (12 rares total) @ 25sp each (total 3 gold) to give you 560 commendations. Nutshell is that, if you’re going to spend the coin to get commendations through donating, consider buying cheap lvl 70 exotics to donate in order to get a greater return.

hey just to verify since I didn’t test this out myself. The exchange rate is identical for both armor and weapons right?

Bought three more off the TP and then did rares for the next 200. Yeah, I know you could probably get an 80 weap cheaper buy just buying one and transforming with a less expensive skin, but I feel like I worked a little harder to earn this.

You can also buy armor/weapons (but let’s use armor, it’s cheaper) from dungeon token vendors and use them to make commendations.

About the Commendation diagram:

I’ve put in the Mystic Forge 3x lvl40 masterwork shoes and got 8 Commendation for it. Guess it depends more on rarity than on item level?

Both rarity and item level seem to play a factor

Is the CC Tokens system sticking around after the event? OR is it only for the next few days?

I think might be only next few days, havn’t seen any official confirmation on it though

Thanks for the fast reply. I know the Karka, dungeon, and new island map are sticking around. My thought was that the emergency would be over after the event and the CC Tokens would be gone. Just looking for your knowledgeable confirmation.
> Sorry to hear your gw2 account was erroneously banned and that the mods on Reddit deleted your post. People should be allowed to talk about being erroneously banned, so that the gw2 user-base can keep track of how often it is happening. I assume that since you are now part of the gw2 lore (yay Dulfy (^_^), everything is fine now. TY again for all the excellent work you do for us.

Hello, can somebody help me out? I’m trying to forge donation packaging + 3 exotic trinkets (2 Berseker’s Ring + 1 Carrion Ring) but each time I click on Forge button, it just fail and nothing happens, the items still in my inventory though and I receive nothing at all. what’s the problem here?

hmm is the forge button greyed out or you are able to use it?

It’s not gryed, it simply clickable button I would say, when I click forge, they combine togethers and nothign happens.

make sure they are lvl80

Sorry for this question, but I’m confused, were did u find vendor where u can buy exotic items for commendation ? o.o
And when I go to T3 cultural armor vendor in LA he sells rare items not exotic.
(I’m probably misunderstanding something ?)

Lionguard Lyns (at Grand Plaza) holds both rare & exotic weapons for exchange with commendations. You will need to click on secondary menu (the first menu features black lion key & mining equip), scroll down the menu & look for those that requires 1,300

Will this go on after the weekend event?

Is it correct that you need only one LVL80 trinket for the 2000 commandations and not 3?

Thanks. Just wondered because it is the only row that does not use the plural form 😉

I can’t find researcher levvi in LA did he go away along with the final event?

They disabled the exotic trinket recipe. You can try, they will appear to be valid but when you click Forge, they remain in your inventory and you get no commendations.
This wasn’t in any patch notes… shady. Don’t trust this company at all.

I have been getting a TON of lvl 75-80 Blue and Geen items (even several rare and a few exotics), and have just been using the forge to empty my bags after a couple runs in FotM. Great way to get the comms, without breaking the bank!

Anyone know what happened to npc? Its gone…
Weird Anet 🙁

[…] you have been stumped or need a little guide to help you with the Captains Council Commendations then Dulfy.net has one just for you.  They put together a very well informative guide and posters […]

[…] Commendations guide. “If you have been stumped or need a little guide to help you with the Captains Council Commendations then Dulfy.net has one just for you. They put together a very well informative guide and posters […]

can you put those lionguard weapons in the forge for chance on dusk?

can you refresh this topic? please
you can’t take the Black lion Keys now.

[…] you have been stumped or need a little guide to help you with the Captains Council Commendations then Dulfy.net has one just for you.  They put together a very well informative guide and posters […]