Nightmare Explosive Conflict EC Operation guide for Fireband and Stormcaller  with detailed strategy and video. Firebrand and Stormcaller are the second bosses in Nightmare EC. This pair requires very high DPS due to the tight enrage timer and revised mechanics that prevents you from getting a second Double Destruction per shield phase.

Double Destruction now applies a much longer debuff, preventing the same two players from taking it again within the same shield phase (Defensive Systems). Therefore, you will want to make sure that your DPS is high enough that you can push for only one DD for every shield phase (at least for 8m, on 16m you can just get two different players). For taking the DD debuff, some guilds do it differently but we have the tank stand on the right and position the turrets there. When Double Destruction lands, the two DPS (one could be healer) run to the turret (go near the base of the turret ) and stand there to receive the DD debuff 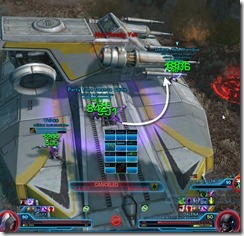 One of the adds during the the Defensive Systems/Shields phase now have a buff called Overcharged Jetpack. If this add is killed, he will explode, damaging anything and anyone nearby (including the shield generators). The way we deal with is to have everyone kill the two other adds first and then get this add really low. Near the end of the defensive systems, everyone jump back on the tank except a ranged DPS that kill him from afar. Just watch for that buff icon and make sure it isn’t on the mob you are killing. 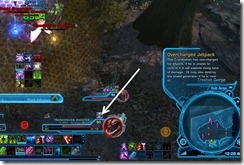 Incinerate Armor now also deals increased damage to the person receiving it in addition to removing all of their armor. Some guilds tank swap for this but you can also have a DPS on Firebrand with a taunt receive the Incinerate armor debuff and then have the tank taunt it back immediately.

If you cannot push your DPS to one DD per shield you can have ranged attacking Firebrand on standing Stormcaller taking the first DD and then one of them goes onto Firebrand to be ready for Defensive Systems and have healer/mdps take the second one.

i think at this early point in NiM EC, most guilds will have to use 3 dps on 1 tank. We have two guys who usually parse around 2100 on the dummys, and they could just make the 1 double but they couldnt do it again the 2nd time around due to lack of cooldowns. So 3 dps is the best bet atm

Dulfy after killing this fight and having a ton of wipes due to the exploding add.

What would happen if you had someone with a pull snatch up the add with the bomb debuff and have ranged nuke him outside the shield? Is it even possible?

yes it is possible and we have thought of doing it but it wasn’t necessary for us. Who would pull it for you though? the tank running around stormcaller during the shield phase?

if u have a gunslinger/sniper push them out you should be able to kill them without having to worry about that.

We just have the DPS swap after DD. Sintanks can still vanish/Defensive Cooldowns the Incinerate.

Whats the use of vanishing when tanking Firebrand? Does it target another person directly and give the debuf to him?

Yes. It stops the IA cast, retargets to #2 on the list and restarts the cast of IA.

Downed the tanks 8man tonight – we’re 50/50 geared between campaign and dreadguard, and were getting them enrage at about 5% – at which point, chaos ensues :p

We had one ranged dps off the fire tank dealing with the yellow beams, and the other fire tank starts each phase on the lightening tank to catch DD number 1 along with the healer. (dps then went back to fire for sheild adds). Incenerates we tank swap, never fails. 2nd DD (which we got 75% of the time) is then just taken by the usual 2 dps.

Esploding adds get a knockback before ranged pops them.

Nice guide Dulfy, but there is a few things I wanted to run by you.

Due to the dps constraints of this fight we want our dps to have as much up-time on the boss as possible. So during DD instead of having dps run to the tank we had our tank run to the dps who were standing in position waiting to take the DD. Do you think guilds having dps issues might want to try this strat instead?

Secondly, with the incinerate. We have you tanks stand in the back facing the “Tank” towards the back wall, this way when we don’t have a mdps with a taunt our Stormcaller tank can taunt Firebrand and get the incinerate de-buff on himself, with no need to tank swap. This is our kill vid explaining how our strats worked.
https://www.youtube.com/watch?v=mCqmXFrqkVA

For the DD, my old guild used to do the method where the tank would turn the turrets to the DPS. This method doesn’t work well in 16m apparently so that is why they were using it on 8m as it was an old habit. I personally do prefer DPS running to it as i feel it is cleaner and there were a couple occasions in the past where tanks didn’t swing the turrets proper and got the dps/healers killed. The run distance for the DPS isn’t that big so I don’t feel it would negatively affect the DPS that much.

The incinerate trick would work nicely though

Cool, thanks. Yes, I agree that it takes skilled tanks with some good practice to pull off the DD strat and depending on your dps’ mobility the other way might be safer. But we were stuck with two snipers 😛

Nice kill and great video, love the music. Your positioning is really different then how we do it, but I have to say the strategy with the dps swaps is brilliant. Love it and looking forward to trying it on our run this week.

Two-manning this seems impossible. Our health is just cut down far too much by the various AoEs and DD debuff that we simply can’t last until we die from electrical disturbances or zap attacks.