The following video was taken on the PTS with my non PvP geared character. While we did lose horribly to the Republics (they deposited a lot of orbs and controlled both pylons at the end of one of the mini rounds), it does show you most of the mechanics in the new warzone.

To start off, it wouldn’t be a bad idea to post the instructions provided at the loading screen as most people have not had a chance to read it yet. In addition, here is a map of the new warzone. 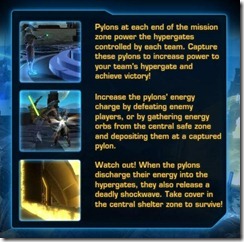 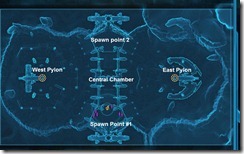 The warzone match is divided into mini rounds that lasts for 2.5 minutes. Every 2.5 minutes, the pylons explode as a gigantic yellow shockwave that travels from the pylons, instantly killing anyone caught outside the Central Chamber and resetting the pylons. 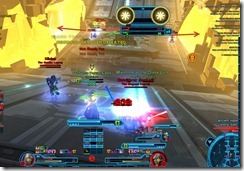 The match ends when one sides gets over 600 points at the end of a mini round.

There are two pylons, one on each side. Here referred to as west and east pylons. It takes 6 seconds channel to capture the pylon and you gain a lot of points for doing so (87 points for capture in the first round). The points rewarded for capturing seems to increase every round. 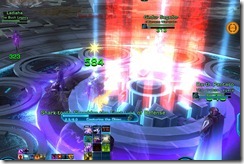 In the central chamber are 4 Green Energy cubes that can be clicked to receive a Gree Energy Orb. This orb lasts for 60 seconds and you must run a pylon your team control to deposit it and gain points. 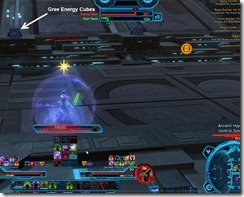 If you deposit an energy orb to your pylon, the points are permanent and not wiped out if you lose a pylon. The amount of points you gain for depositing an orb is twice that of killing players.

The system for scoring points in Ancient Hypergates is a bit complicated.Here is the scoreboard at the top, lets take a look.

LOVE IT! Can’t wait to play with my guild 😀

Any idea if the energy cubes drop when someone enters stealth just like in hutball?

I have heard that it drops. If someone else can confirm that would be great!

I think I may have just seen one of my friends from The Shadowlands shooting at you. I need to log onto the PTS now to check.

Correction – I see 3 people I know in that warzone. That was a nice little unexpected surprise. 🙂 I haven’t logged in because there had been so few people on last time I looked.

how do you like the new warzone compared to the other existing ones?

It is certainly different and nvolves more strategy than the current ones. It is really also quite fun with the shockwave/explosion mechanic as there are bound to be quite alot of people dying to that the first day on live hehe

Question I thought I saw you put an orb in the enemies pylon in the beginning of the match ? If this is true how does that affect your score or the enemies score ?

I like the fact that there is no location given to camp for people just giving up like we have in Civil War and Novare Coast. Looking forward to play this map.