Dailies can be a chore to do sometimes but they give out good credits and daily commendations. Daily commendations these days are quite useful and it isn’t just for gearing up new characters. Look for Mission Support Vendors on Ilum, Belsavis, Black Hole and Section X daily hubs to purchase the following

There are four locations to do dailies: Ilum, Belsavis, Black Hole, and Section X. Ilum give the best credit/daily while Section X give the best Daily Comms/daily but that place can be rough for a fresh 50. While Black Hole and Section X are fairly straight forward (just pick everything up at the terminal except for the [AREA] missions), Ilum and Belsavis can be a bit tricky for those new to doing dailies. I have made a couple maps of the daily hubs for Ilum & Belsavis. 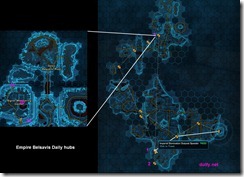 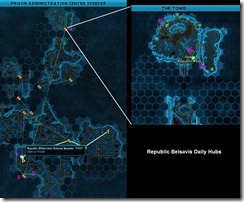 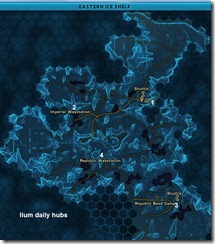 Here is a list of all the dailies currently in Patch 1.5. This list also includes the Group Finder and Flashpoint dailies that rewards Daily Commendations.

Note that for flashpoints, [DAILY]  Galactic Conflicts gives out 6 Columi Commendations, 7 Tionese Commendations, 5 Daily Commendations and 13,995 credits. This daily can be picked up from the terminal at the Supplies section of the Fleet.

NOTE: In the table below, the subtotal for each daily hub does not include the weekly reward (since it is only repeatable once a week) 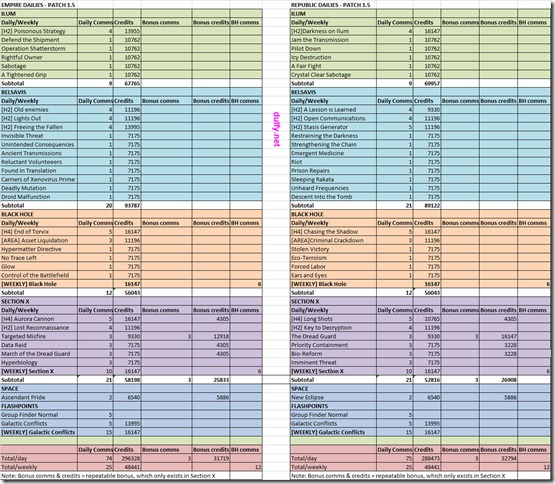 Lastly, keep in mind that dailies reset at 12:00 UTC. If you are EST, this would be 7AM EST during winter/spring.

All weeklies resets at 12:00 UTC on Tuesday (Tuesday morning for American players). All weeklies except for Black Hole and Section X weekly can be picked up at the mission terminal in Supplies subsection of the Fleet.

If you kill Nightmare Pilgrim (16man world boss on Voss), you can pick up this weekly

You will be spending them on the Campaign/Black Hole vendors on the Supplies section of the fleet.

Tionese is basically the starter set for L50s. You will be able to run most Hardmode flashpoints (might have some trouble with Lost Island) with this set. The armoring/hilt you can buy from the daily vendors is also Tionese grade (mods are Q23). You shouldn’t really wasting your time getting this set due to two reasons

1) When patch 1.6 lands, you will be given a full set of Tionese gear for free via one of the new missions given to L50s.

2) Upon reaching L50, you will be given a set of Recruit MK-2 set for free. While this set is for PvP, it can get you started in PvE.

Columi is obtained from end bosses of each hardmode flashpoint.

Belt/Bracers/Ears/implants are usually random drops off the second boss of each hardmode flashpoint.

Columi is enough to get you started for hardmode Eternity Vault/Karagga’s Palace (storymode version of these operations drops Columi so do them instead of flashpoints if you want). You can also attempt storymode Explosive Conflict and Terror from Beyond with Colum but they are a bit more difficult.

Campaign gear is earned exclusively in hardmode Explosive Conflict. The Campaign boots comes from Nightmare Pilgrim, a world boss designed for a 16m operation in Rakata+ on Voss.

Once you have Campaign/Black Hole, you will be able to tackle hardmode Terror from Beyond . You may also try your hands on Nightmare Explosive Conflict but it is advised to have some Dread Guard gear from TFB first.

Dread Guard is the newest gear tier available only through hardmode Terror from Beyond and Nightmare Explosive Conflict.

With the arrival of the Dread Guard relics on the daily vendors, War Hero Relics are no longer the BiS relics they used to be. However, some players may still prefer the passive +113 Shield/Defense/Power stat that War Hero relics give. (Glance rating = Shield rating)

A preliminary version of Patch 1.6 is on the PTS. While this is not the final version, it does reveal some interesting things coming up in patch 1.6.

34 replies on “SWTOR Dailies and PvE Endgame gearing in 1.5”

This is by far the best gearing guide anywhere on the web for SWTOR. Thanks dulfy!

Great job as always! I think some of the black hole offhands (Sentinel or Slinger come to mind) are 75 BH comms not 50.

you are correct, I added a row to include offhands that are weapons 😀

Fantastic write up Dulfy! Thank you for all your hard work, your guides are the best! Could you please add information on the EarPieces, especially the Dread Guard ones?

they drop from EC NM Zorn and Toth, added them in 😀

Thank you very much. Love how this comes out 12 hours after my Commando hit level 50. Great timing! =)

Amazing job as always, Dulfy! Just wanted to note that the Section X daily totals seem a bit off, though I’m guessing you didn’t include the Weekly reward in the totals? With the Weekly it comes to 31 total daily comms – at least that’s what I got today.

the subtotals do not include the weekly ones as they are subtotals per day and weekly is only once a week. I will specify it so make it less confusing 😀

No worries! I thought so, but just wanted to confirm 🙂

how long does it take you to do these guides?
PS: glad to have you in the swtor community

too much dailies, to do them, erm, daily?

my take is, skip basic Belsavis (too spread out), and heroics takes too much time to get team

still takes about 2 hours to complete… and I try to level up my alts too!

Just when i was looking for such guide.

btw. do you know if devs will implement some way to exchange my just farmed BM gear for War Hero? It’s a bit unfair, i just found out that BM will be replaced with WH gear with BMs price…

Correct me if I’m wrong, but for your Gearing for Operations (Section 4) the first table you see. I think you have Name and Rating column titles switched. Great job otherwise! Always a great help.

Hey great guide, I would like to mention about Empire Dailys on Belsavis the signal monitoring station in the upper part of the map is un-reachable unless you pick up the bonus quest at the Belsavis orbital station. It’s the only way you can get access to this area. I’ve had a bit of running around to figure this out and was rather annoying, hope it helps others. =)

Love these posts you do! You blow all the other swtor sites away. So useful and convenient.

When I first read this I mentally inserted a comma after the word ‘posts’ and ended up hearing the whole thing in my head with Yoda’s voice.

Do the new dread “use” relics share cooldowns. I.E if I bought 2 power use relics would I be wasting comms?

Shared CD of 2 mins for identical relics, 1 min CD between poppable relics of different types (crit/surge, alacrity, power, etc). If you are a DoT spec, the internal elemental proc relic could be a good choice to pair with the power one. If you have decent armor penetration DoT or otherwise, the kinetic/energy one could be your thing.

Madness spec’d for dps pve, looking for the best option relic to go along with the dread power use one

if you have a halfway geared companion you should be able to blitz most daily heroics.
I still die once or twice to foul ups, but for the most part it is soloable, or at minimum duo.
Sec X only exception but those I hate anyways so do once a week.

It should be noted that Columi bracers drop off Yadira Ban on Empire side, so it should actually be listed as Black Talon/Esseles, not Boarding Party.

Great guide! Thank you! In section 4.3, should it not say ‘Black Talon/Esseles’ for the bracers?

I am so tired of people thinking Columi is better than War Hero, and that War Hero is terrible in pve!!

Yup, everything changes in 2.0 though so I will need to make a new guide soon

Thanks much! Amazing site!