The Republic version, Thanium Disruption, is largely identical except the enemies are switched around.

Start: You will get two mercenary ships at first for part of the bonus mission. Don’t waste your missiles on them. Use blasters and shield regen to recover if you get hit. Take your time as you won’t encounter anything until 2m 15s (about 1m 30s to deal with them).

2m 15s is when you will encounter the first minefield. Do not use your EWP (Electronic Warfare Pod) here. Instead, move around the screen, do barrel rolls, get full shield power and do whatever you can to avoid damage.

2m 03s Pop your EWP here and switch full power to blasters. Shoot at the frigate in the middle of the minefield using blasters at first and then missiles when you can get a lock on. It is highly recommended that you use your EMP here to further damage the frigate and take out the nearby mines (1m 52s is a good time to activate them). 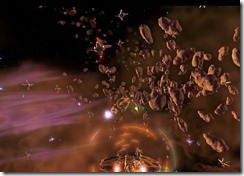 1m 48s Immediately put power back on shields. You will be taking some nasty damage from the Mandalorian ships and have a high chance to crash onto nearby asteroids. You will be using mostly missiles from here on out and only risk blasters when you have significant shield power to spare.

1m 39s Super tricky gap, if you crash here without shields, you can lose close to 50% of your ship’s health. Bank left, right, and then left again. This part may take a few practice. 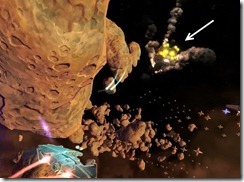 1m 16s Here is another spot with a high chance to crash. Your ship will dive below an asteroid and then immediately fly above a second asteroid. I did a barrel roll here and avoided crashing into the asteroid. 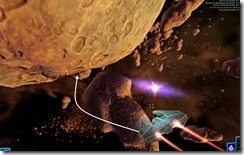 1m 06s Last chance to finish off the frigate. 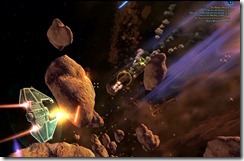 From here on, if you have enough heath left on the ship, switch power to full blasters and throw everything on the Shuttle and Mandalorian Commander ship.