The Republic version, Ardis Outpost Fortification , is largely identical except the enemies are switched around.

If you don’t know how to use Proton Torpedoes, maybe this image will help you.

5m 40s This is an opportunity to use your proton torpedoes here to finish the objective. You have time to fire off two torpedoes. Just make sure all your power is diverted to shields so you don’t take any ship damage. 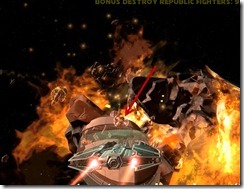 5m 08s You will encounter the first group of six bombers here. You should destroy them using just blasters in order to save missiles for later parts of the mission where shield regen is important for survival. 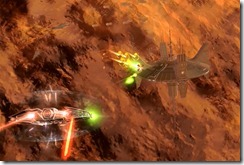 4m 37s Once you destroy all six bombers and take a dive under the station, you will emerge with a Jedi ship in front of you taking peashots. Focus your blaster fire and missiles to destroy it ASAP and then work on the frigate nearby. 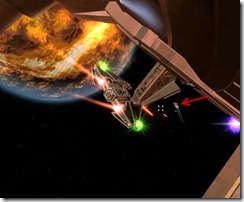 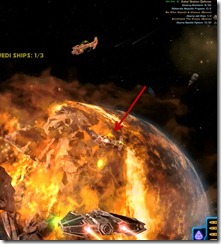 4m 07s You are going to take a lot of damage here, most from the turrets on the side of the Destroyer. Dodge as much as possible and make sure you go in with a full shield.This is also a good time to pop your EMP when you get near the frigate as this will take out the turrets on the side of the Destroyer, which is very handy as you will be making more passes here later in the mission (see 2m 29s). Use your missiles on the frigate if you can while dodging the enemy fire. Don’t take too much damage here or you will have trouble later on. Alternatively, you can just use your EWP here and turn on full blaster power. 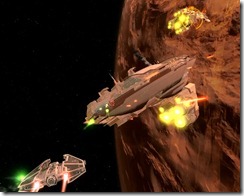 3m 37s You will get a few seconds to take some shots at the frigate here before facing another set of six bombers. These guys are escorted by a Jedi ship that can dish out a lot of damage to your ship. You will want to get at least 10/30 bombers here or otherwise you might have trouble later on meeting the objective.Use your missiles if you can so you can regen shield and take less damage from the Jedi Ship. 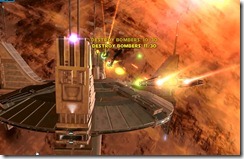 2m 54s You will get an opportunity to finish off a frigate you encountered at 4m 37s. 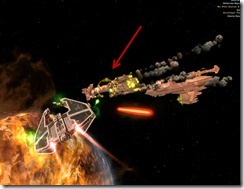 2m 29s You will get a 2nd pass at the two frigates near the Destroyer. Hopefully the EMP you set off in the first pass took out most of the turrets on the destroyer. Pick the frigate near the back and finish it off when you come around. 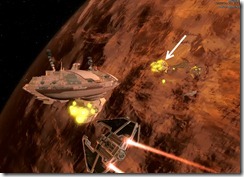 1m 48s You will be taking massive damage from all the bombers here. Turn on your EWP and go full blaster power to take out as much as you can. In a few seconds, a Jedi ship will join them, forcing you to regen shield power and use missiles. 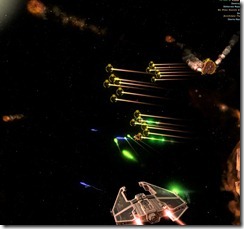 1m 09s Once you dive down towards the space station,  make sure you have full shield power and then switch to full blasters and unload on the bombers below. You will take some damage here but take out as much bombers as it is safe to do so. Once you dive down, you will be following groups of bombers. Use full blaster power here and save up some missiles for the last frigate. 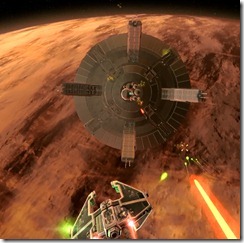 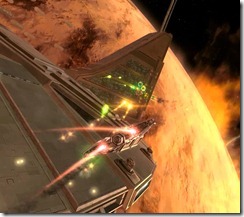 20s Here is your opportunity to finish off the last frigate. Unload everything you have on this frigate. I am not sure on which pass you encountered this frigate previously but it was lightly damaged. If you focus all your blaster fire and missiles on it, you can destroy it relatively quickly. 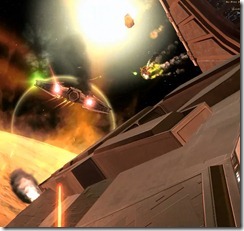 This looks…. quite difficult. How many attempts would you say you had at it before you successfully completed it? Is your ship completely modified with lvl 7 goodies?

This was actually the first mission I tried. Got it after 8 attempts I think. I had the defensive and offensive packs from the cartel market + Grade 7 Improved Power Conversion Module from the fleet vendor (300k)

Dulfy, love your posts, thank you SO much for these space mission tips, they have really helped. Just wanted to add on this specific mission I was ending up 10 bombers short following your exact advice. I tried it one more time, changing only when I used the EMP blast. Instead of using it near the destroyer with the turrets as you suggest, I used it in the middle of that massive swarm of bombers around 1m48s in conjunction with the EWP & full blasters and managed to pass the mission. This might work for some people still struggling.

Eh typo there, not one frigate, the frigates :p I figure there must a particular target on them that you’re supposed to hit, because someone told me you only need 3 missiles for a frigate.

I typically don’t use that many missiles on them. Usually I just work on the frigate turrets first with blasters and then when I get close I shoot missiles at the engines (it is like inside the frigate). For me, personally, the frigates are only destroyed if all the targets on the frigates “disappeared” so that means destroying everything. I could be doing it wrong though.

The frigates are destroyed once all the target parts of them are destroyed. I only use missiles on the shielded parts that are immune to blaster fire. They have a different colour circle around them. I think from memory that the ones your blasters can damage have a red circle while the ones that need missiles have an orange circle.
If you can spare an EMP pulse, some missions including this one have parts where you fly right between a couple of frigates. A standard EMP pulse weakens them a bit. A grade 7 EMP pulse rips through them, leaving pretty you with only a few hits to finish them off.

This is just my preference but as I swoop down on the destroyer i pop my emp as it takes out all but 2 of the turrets so I dont have to worry about it for the rest of the mission. Doing it that early also means it is still available for when all the bombers are grouped later.

ive tried the Ardis outpost fortification mission (republic) several times and where you said to use blasters on the 1st set of bombers it doesnt work they have shields that wont drop unless you use a ton of missiles and I have all grade 7 ship parts but in your video I see you do it with ease is there something im missing?

Did you try it today? it is currently bugged atm

Yeah the mission feels way different this week compared to last week. It must be at best a bug or at worst a stealth buff to all the mobs….

Thanks to this video I realized that I was not using the keyboard commands to move my ship and dodge all the Sith/Jedi heavy fighter attacks, while aiming with the mouse. Once I did that, taking out the Sith/Jedi ships was much simpler.

Also, dodging with the keyboard makes it much easier to dodge all the blaster attacks from the bombers while taking them out as well.

Made 20 passes at this (and the other missions) but always end up failing idk what im doing wrong but I am following your instructions very close….guess some people just have tons of luck