A comprehensive guide to the Snowball Mayhem PvP activity introduced as part of the GW2 Wintersday event. Updating for 2015 Wintersday 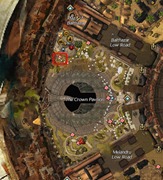 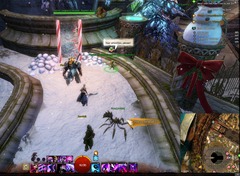 The objective of the game is to become the first team to score 500 points.

There are three classes avilable to chose. You can re-pick your class anytime you respawn or use the elite skill to port back to the entrance.

Supporter
Supporters control areas of the battlefield and assist their allies.

Heavy Gunner
Heavy Gunners take and deal a lot of damage. They can only attack once they’ve drawn their weapon, which has the double effect of slowing them down and granting them passive health regeneration.

Scout
Scouts are infiltrators and assassins. They are the fastest class and can use stealth. Additionally, the scout gets a damage bonus when hitting enemies from behind.

Your #6 skill is determined by your real open world profession.

These power ups can be found all over the map.

In terms of personal score, everytime you bring a gift back to your base, you get 10 points and everytime you kill an enemy player, you get 3 points. If you stop a gift carrier from the opposing team, you get 2 points. 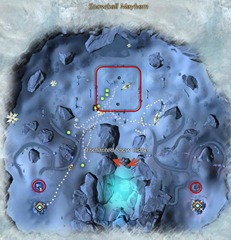 Here is a map of Snowball Mayhem. The large rectangle at the top indicate the rough area where the gift will spawn while the two smaller circles at the bottom indicates the gift drop off points.

Map Shortcut: There is a shortcut that allow you to get from your base to the enemy base and vice versa. You will need to make this jump here while not in combat (it is a fairly long jump). There is usually a power-up located on the middle rock as well. 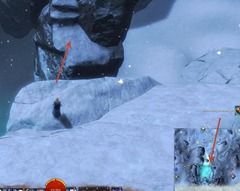 Really didn’t enjoy this game at all. Entire opposing team went scouts and set in the center as a zerg. Had no chance.

It seems as though every single person who joins is put on only one side. And since people join and leave rather quickly, this almost leads to a steamroll.

I played 8 games and every time i was on the other team it was full stacked and we won by 500 points. Its ridiculous.

[…] achievements are part of the Snowball Mayhem PvP minigame. They require you to either carry 5 gifts back to base or down 5 enemy gift carrier (you need to be […]

So it appears the snowball mayhem is bugged… after you finished 2 sets for snowball mayhem (60 games) on the 3rd set it wont progress again after hit 2 games, stuck at 2/30… Anet always give us a buggy content… why anet why…

[…] the Snowball Fight achievement. You need to win Snowball Mayhem 3 […]

[…] victory in the Snowball Mayhem activity 3 times during […]