A guide to GW2’s Disaster Derailed, Divinity’s Reach version of Tixx’s Infinirarium. This instance was first opened on Dec 16 and gave out the achievement Disaster Derailed and the Princess Doll  Frame for those who completed it. It is designed for a 5 person dungeon but can be done with less (15-20 minutes)

Go to Divinity’s Reach, at the south end of the city near Dwayna Waypoint , you will see the dungeon entrance.This entrance will be here until Dec 17 10 am PST. 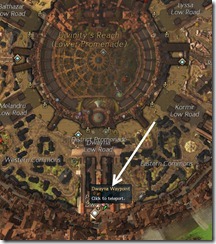 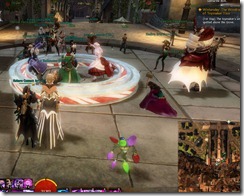 1. Collect presents for the toy princess – 15 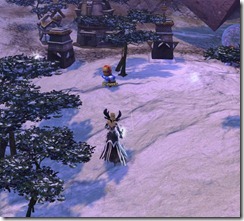 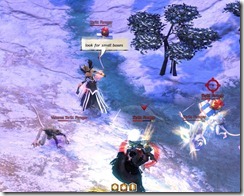 You need to pick up a plasma paint cannon and paint princess dolls with white dresses. 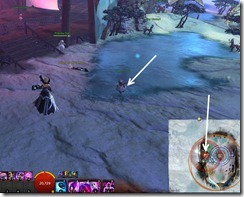 You will also encounter skritts with paint guns that you can paint to turn them to a red princess doll – they will despawn shortly after.

The last couple of Princess Dolls can be a bit tricky to get so just run around and look for princess dolls with white dresses.Also, the game pings the location of the last couple dolls on the minimap so keep an eye on that and don’t ping the map yourself.

3. Retake the princess dolls’ halmet from the skritt 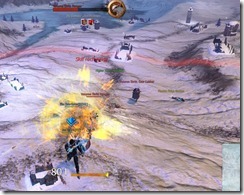 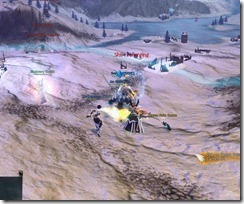 4. Defend the toy Ventari from the princess dolls

Princess Dolls have gone rogue and are trying to ride the Ventari toys. Just kill them! If all 5 Ventari toys are killed, you get kicked out of the dungeon. 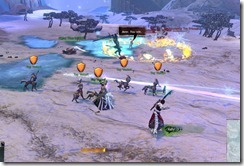 Same as yesterday, kill the turrets while getting attacked by an infinite spawn of malfunctioning Toy Ventari. Time to rack up kills for your monthly.

6. Stop Toxx from rampaging through the airship 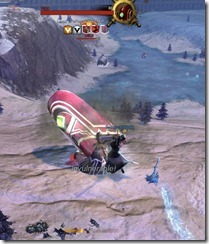 You can get the Princess Doll frame to make the mini Princess Doll or just buy it from the gemstore for 350 gems. The princess doll has an animation where she lifts up her dress. 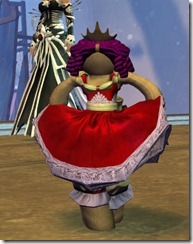 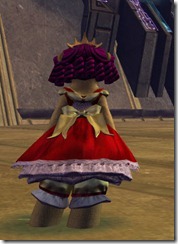 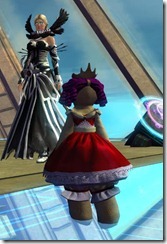 Chest: There is a chest in the middle of the map after you have completed the instance, don’t forget to loot it.

Competition Reward: Like yesterday, you get 100 Mystical Gears, Princess Doll frame, and a choice between 250 Enchanted Stuffing or Drop of Magic Glue. You will need 250 Mystical Gears to craft a mini (you should have 200 after today). These rewards are given for the first time you complete it and subsequent runs only rewards you with gifts (even if you run it with an alt or run it after daily reset). 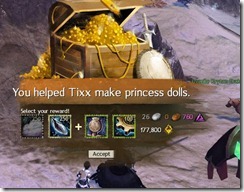 Both achievements counts towards the Apprentice Toymaker achievement/title.

I think describing the Princess Doll as doing a curtsy would be more accurate and a little less creepy. 🙂

a few tips:
1. During the”Color unpainted princes dolls with the plasma paint cannon”, the last dolls will be automatically pinged on the minimap periodically. If you can’t find them, keep an eye on the minimap
2. during the “Retake the princess dolls’ halmet from the skritt” you don’t have to destroy the skritts. just get them out of the circle, kite them around while one person stands in the circle. Takes less than a minute this way.
3. during the Defend the toy Ventari from the princess dolls if all 5 toys are disabled, you get kicked out of the dungeon and have to restart from the start (for those trying to do it solo)

cool ty, I thought the map pings were just my group members randomly clicking on the maps trolling :p

Some malfunction toy Ventari will spawn near mid of map during ‘Destroying Malfunction Turrets’ event. Killing them will also rack up points for monthly ‘Buster of the Bustered’, on top of the prior malfunction princess dolls

I cant do this dungeon anymore?