Head to the Crown Pavilion in Divinity’s Reach and talk to Toy Captain to start the activity. Prepare to spend an hour if you want to get through all 10 rounds.

Note: For 2014/2015 Wintersday, you cannot do Toypocalypse with a party! This is an intended change made to stabilize PvP, according to Arenanet. 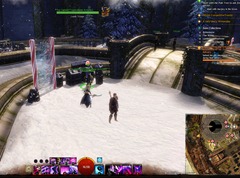 Your goal is to protect the five gift dolyaks from the malfunctioning toys at the center of the map, you need to survive all 10 rounds against the toys to win. Each round last quite a few minutes.  Near the end of each odd round, Toxx shows up and you will need to defeat her.

Every two rounds, the toys increase the quantity. 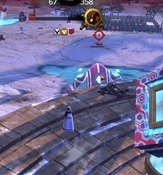 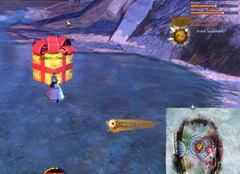 You only regen health by standing near the fountain thingie surrounded by the dolyaks. Dolyaks can only be healed by picking up hay that spawn near them on even rounds (i.e. 2, 4, 6) 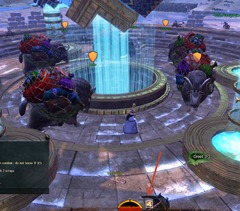 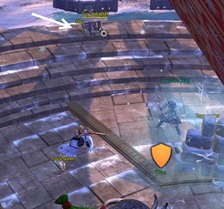 You have a choice between three weapons: Toysmasher (melee weapon that knocks toys around), Toy Cap Rifle (high dmg sniper rifle), Toy Repair Pistol (defensive pistol that stuns and make toys turn on each other). These weapons can be picked up at the entrance or near the gift dolyaks.

Destroy trees and buildings yield scraps that can be used to build defensive structures near the dolyaks. There are also snow on the ground from destroyed objects that you you can pick up to build stuff. You can upgrade these defenses to the super and then the mega level by picking up scraps/snow and running up to a snowman/wall/ballista/.catapult and press F to upgrade them.

Scraps allow you to build

Snow can be used to build

Skirtt mercenaries are also available for hire at the west side of the map. You will need 3 scrap per skritt. 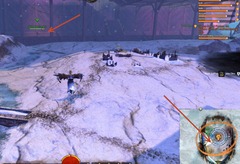 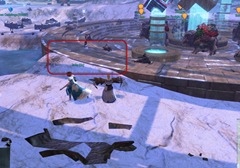 Well Toypocalypse Canceled is very hard to do…

Indeed, I got lucky and got into a good pug that knows what to do and we got the achievement.

Not sure how Dulfy got this up so fast. I was literally just in there with her. And that Zolty guy is in [Os]. ijs

Wave 1 is the hardest. Before players really have time to build any kind of defense, the toys are already in the middle and usually kill a dolyak before players can destroy them.

So we are doing it for about 1 hour and then get giant wintersday gifts + personalized Gifts?
That’s all?

yes, also the achievement and the experience of doing it

It would be nice to have a Toysmasher to walk around and smash everything in the whole game (mats are picked up by the others when they are free or the wave is stable), also deal area damage and knockbacks when it is necessary.
PS: Pistol is useful when the sieges are not up, but it became useless in mid-late game while a rifle or a toysmasher can clean up the wave easily with the sieges.

First few waves arent really hard. You just need to intercept the toys as they spawn, instead of waiting for them get into the middle where they scatter and become much harder to manage. Get one person with hammer to aggro the wave, then 1-2 rifles guys can pick them off. Have another hammer person head wait for the next wave.

Don’t forget to open that chest outside for 3 unsafe gifts, a 15-slot bag, 200 cogs and the toymaker’s bag back accessory.

Snow isnt just on the ground btw, its from destroying buildings and trees just like scraps.

You can build stuff on top of the Snow walls 🙂

I did this too, at first, until I noticed that some of the toys liked to AOE the walls, thus also the catas/trebs on top of the walls. This would destroy my defenses way faster than intended. Now, I try to surround the dolyaks with walls, but keep the catapults within LoS but farther from the walls to prevent aoe damage.

I also found that in the north (or south?) part of the map (on the platform with the gift deposits), you can build mortars using 3 scraps. These operate like PvP/Engie mortars. From my experience, they seem to aoe hit around 5k.

Hi,
for my aquire of achievement this prove usefull:
Rifle (3 for harvest, 1 for long range 1/2 hp toy kills)

Upgrade only to repair. More targets, more dispread waves goes, less single target dmg.
Build catapults on lower grounds for non direct, ballista for direct.
If You harvest 3+ build immediatelly where You standing, because You cannot time efficiently transport all and You should easily harvest more around. Again it makes dispread waves.

Dont let Toxx smash Your defense, keep her in proper distance.
Dont die on Toxx, because Your respawn time increase.
5 wave cooperating long range people with “own” segments of circle are more systematic than 5 on one place (and 2/3 of circle uncovered..)
Enjoy
Blue

Protip: The area between the spawn and middle has tons of buildings to destroy. Smash everything and quickly build things all over that area (since you dont have to run back to middle it’s very quick to get 20+ things up). Dont upgrade unless something is almost dead, just build as many as you can and space them out so they dont get aoe’d together. This will completely eliminate the 2-3 waves that spawn in that area. You can even extend up to the east/west spawns as you litter the area with crap (catapults obliterates those waves since they spawn in a tight pack).

nerfed achievement FTL. just cheapened the effort I put in to get the 10 waves with 5 Dolyaks left.

I) This was to get the no death dolyak achievement with minimal effort, so you could also do the nerfed achievement easily: just run around destroy everything you see and when you find Scraps build a catapult, when you find snow, build a snowman, just do it at the spot you found the scraps/snow -> dont upgrade -> dont worry why it works, dont try to figure out why, it just does

II) Walls are solid objects NPC’s can’t stand in, before I knew about my trick I) I used to do this to get the no death dolyak achievement: Find Snow, build a WALL on top of the dolyak, if you want to push it backwards do it a little toward you, if you wanna do it towards you put the wall a little behind the dolyak’s hitbox. You’ll see clearly its pretty easy to do once you try

The point of II) is to stack 3 dolyaks and then the other 2 in a group aswell, this leaves 2 “bases” you have to defend instead of a whole circle containing 5 dolyaks…

Today, I was getting a personalized gift in my bag with each round and a chance to loot 2-5 Giant Gifts from the dropped present. After ten rounds I automatically got 4 personalized but no lootables from a dropped box.

My tactic to do Toycalypse: smash Buildings and Trees near the rocks and not destroyable Buildings. When u know, how to jump, u can get up the high Rocks and Buildings, like the Castle in southwest. U put for example on the Castle on every Tower a cata and upg them, when theyre nearly Destroyed. The Point is: Not all Enemys can reach those Catas and most time they either get ignored, or Enemys cant reach it. But those help rly a lot. the rest uve to do, spam the Area around the circle with Snowmen and Walls+Catas/Ballis on top. This Tactic works better, when u survived the first 1-2 Rounds with bunkering at the Dolys. A few Trees and Buildings are close enough, to get sieges and to spam those in mid. Important then, place catas/ballis on upper parts, where Melees cant reach. Snowmen on the Ramps, make it relative safe.

is there achivment guide for very merry wintersday ?

So, is it no longer possible to queue solo for toypocalypse? I don’t see any option for this ingame.

Is there a limit to the amount of Catapults and stuff you can build? I found that they disappear after a while…

[…] Toypocalypse with at least one living gift doylak. Fairly easy achievement to get as even the most horrid groups […]

[…] Survive Toypocalypse with at least one living gift doylak. Fairly easy achievement to get as even the most horrid groups can keep at least 1 dolyak alive. […]

[…] the Toy Qualify Control achievement. Finish 30 rounds of Toypocalypse during […]

[…] Toypocalypse with at least one living gift doylak. Fairly easy achievement to get as even the most horrid groups […]