A review of the Razer Blackwidow Ultimate 2013 mechanical gaming keyboard with a focus on the MMO gamer. Keyboard generously supplied by Alex of hitmeister.de for review.

While mechanical keyboards have been around for quite a while, they have largely been replaced by cheaper membrane keyboards. Recently, due to gaming peripheral companies such as Razer, mechanical keyboards are making a comeback in gaming and are becoming rather affordable for the average gamer.

Mechanical keyboards have a much more bouncy and responsive feel compared to membrane keyboards (which often feels mushy in comparison). In addition, they have a distinctive click-clak sound when typing. This sound can be quite delightful to the user but might be an annoyance to other people nearby. The other thing you will notice with mechanical keyboards is your typing behaviour. Traditional membrane keyboards require you to apply enough force to completely depress the key to the bottom, which can often result in finger fatigue due to long term typing. Mechanical keyboards, on the other hand, are able to register the key press with much less force, which results in faster keystrokes and less chance for fatigue from overtyping.

As a MMO gamer, you will be using the keyboard to type much more than someone who plays a FPS game for example. Thus, investing in a keyboard that last longer (mechanical keyboards have keys that can last 50 million keystrokes vs 5-10 million for membrane keyboards) and feels better can be a good choice for the long term.

Razer Blackwidow: Regular vs Ultimate vs Stealth vs 2013

There are quite a few versions of the Razer Blackwidow keyboards out there and it can be confusing to know their differences. Here is a break down:

The review is for the 2013 Ultimate version.

Keyboard is wrapped in a neat little box with a plastic cover on top. The keyboard comes with a very thick and sturdy cable that branches into two USB cables and a microphone cable.

The side of the keyboard is a USB passthrough and 2 holes for Mic In/Headphone Out.

The keyboard itself is quite heavy (3.31 lbs) and sturdy in appearance. The keyboard won’t bulge on your table unless you actually apply force to purposely move it.

The Razer BlackWidow Ultimate uses the Cherry MX Blue mechanical switch, which provides both tactile response and loud clicking sound. They are considered one of the best mechanical switches for typing and generally preferred for gaming. It is harder to double tap using the MX Blue compared to other mechanical switches (It is not something that I have noticed).

The letters on the keys are laser etched (laser burned the character into the keycap), making them near impossible to wear off. In addition, the keycaps are coated with a somewhat fingerprint/smudge resistant coat. Keys are individually lit.

In addition to the backlit on individual keys, the entire area under the keys is green and reflects the backlit from the keys. This makes the keyboard much easier to see, especially under low light conditions. Unfortunately, only green color is available for the backlit.

You can adjust the backlit brightness directly on the keyboard itself by simply holding down the Fn key and press these two keys to turn up or down the brightness (F11 and F12). The brightness changes are fairly gradual, allowing you to pick a specific brightness setting. Alternatively, you can choose from four brightness settings on the Razer software (off, dim, normal, bright).

To the left of the backlight controls is F10, which also serves as button to turn on/off Game Mode when the Fn key is also pressed down. In the Game Mode, the Window key is disabled by default but you can also chose to turn off alt-tab and alt-f4 via the Razer Synapse software.During Game Mode, the keyboard will also be responsive to up to 10 keys being pressed simultaneously (10KRO). There is a little symbol at the top right of the keyboard that will lit up when the keyboard is in Game Mode. 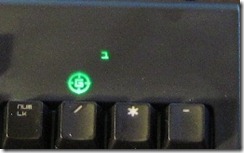 F9 serves a button to record macros on the fly (You will need to the .All you need to do is to press F9 + Fn key and then press a series of keystrokes you like to record onto a macro. During recording, the top right corner of the keyboard will have a little red dot telling you that you are recording. When you are done recording, press Fn + F9 again and that same dot will start blinking telling you to insert that macro onto a key. Recording macros this way captures the delays between keystrokes. You can also record macros using the Razer Synapse software, which is covered later in the review. 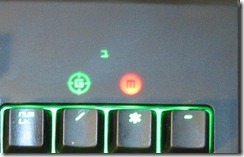 On the very left of the keyboard are 5 buttons (M1-M5) that designed to store macros. These keys are close to the main keyboard and clustered together for easy access.

Lastly, the F1, F2, F3, F5, F6, and F7 act as media and volume controls when pressed simultaneously with the Fn key. Note that the little white square on those F keys do not have blacklit.

The first thing you will notice about the software is the ability to create up to 10 profiles. You can easily switch profiles by using Fn + 1, 2, 3, 4 etc. Each profile can have different macros, and different key assignments. 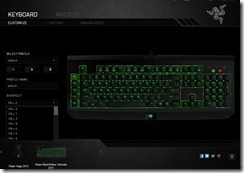 Every key except for the Fn key can be programmed to do something else – press a different keystroke, activate a mouse function, launch a program, use a macro etc. All you need to do is to click on any of the keys on the virtual keyboard inside the software and a window will pop up with different options to program that specific button. Here is the Right Ctrl button for example. 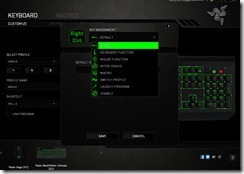 In addition to programming individual keys, you can also adjust the brightness and specify what buttons Game Mode turns off. All of these are stored on a specific profile. 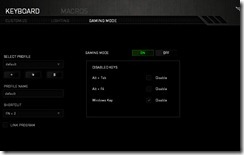 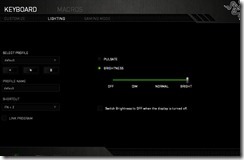 The other major function of the Synapse software is macro creation. On the Macros tab, you will find a simple interface to create macros. You can record macros with delay, without delay, or with a fixed delay. Once a macro is created, you can go back and edit every single step. If you are satisfied with the result, you can go back to the keystroke assignment tab and select a button to insert the macro. 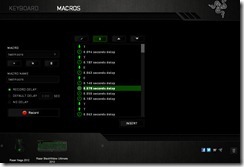 No keyboard is perfect. Razer Blackwidow Ultimate 2013 is a great keyboard but it does have a few flaws. While the keyboard does have a matte finish, it is still fairly prone to smudges and fingerprints, making cleaning a hassle. The Cherry MX  Blue switches it employs are loud, which can an annoyance to people near you. If the noise is becoming an issue, consider the stealth version of Razer Blackwidow, which uses Cherry MX Brown switches that give the same tactile response but less of the click sound. Lastly, the keyboard uses a weird font, which can be confusing for some people who look at the keyboard to type.

Hi Dulfy, love your guides for GW2 ^_^ this review is great, will give the KB a look

thanks agin, grats on becoming a Boss!

Great review as always. Honestly, I’d like to see you do more peripheral reviews, becuase you’re something of a trusted name in MMOs IMHO. For example, it’d be interesting to see your take on the Logitech mechanical keyboard as well. Personally, I’ve tried multiple gaming keyboards, but always find myself back to the trusty old Microsoft Natural for comfort/ergonomics reasons. I wish Razer or Logitech would make a gaming ergonomic keyboard, but their only answer seems to be “buy our G13/Nostromo,” not realizing that some of us want fast access to the keyboard to communicate with folks when we play MMOs.

One editing note: “nose” in the Stealth version description should be “noise” 🙂

thanks, corrected. I will try to get in touch with Logitech to review their new keyboard.The logitech one is a bit more quieter from what i heard 🙂

I picked up the Logitech and it’s pretty awesome so far. Key throws are smooth like butter and it’s seems like it’s about as quiet as a non-mechanical keyboard. The backlighting is nice; it’s just one color (white), but you can adjust the brightness for the the WASD and direction keys separately from the rest of the keyboard, which is nice. The software is also nice, which is to be expected since Logitech makes some of the best drivers out there (far superior to Razer’s Synapse IMHO). I haven’t compared it side-by-side to the Black Widow, so it’d still be interesting to see what you think, but so far, this feels like a keeper to me.

im still using the good ol merc stealth probably the best mmo keyboard its just i made huge mistake updating to windows 8 and shit break lose (software is unusable). thanks for this, i might consider buying a new one

http://deskthority.net/wiki/Rollover,_blocking_and_ghosting
– Here is the technical post on key you can press some key combinations and not others.

MX Browns all the way 😛

I am to happy with my noppoo mini choc to even bother with razer products anymore to be honest.

Great review. The blue switches are loud, if you live with people I would suggest browns or red/black if you play FPS a lot. Far as no perfect keyboard. The Ducky II shines are about as good as I can imagine a keyboard can get, but you will pay a steep price for one.

This keyboard is smaller than the traditional dell and gateway keyboards. You will notice immediatly you are fat fingering. I have used the keyboard for over two months and still cannot play guild wars or sc2 with out mis-pressing keys.
Also the Razor synapse software requires an internet connection to load up. The synapse software may be a reason to not purchase this keyboard. I have uninstalled the driver and software to go back to the old pnp drivers. I like the noise. It helps my APM. I wish I could find a better way to track macros than the synapse software. I will try using the F9 some more.

Actually it wasn’t due to gaming companies like razer that mechanicals made a comeback. It was because Asian gamers (esp Starcraft ones) use mechanical keyboards like Filco, Das keyboards and topre and gaming companies copied that. I’ve had a filco tenkeyless with MX blacks for a few years now and besides the superior quality compared to any membrane kb, the buttons give you a feeling that you consider ever changing back to membrane kbs.
My next one is probably gonna be a Das or a filco with MX blues.

My FN Keys do not work, any solutions?

Hi .
So this morning I turned my computer on to find that my razer anansi was
not lighting up. I unplugged it and plugged it back in and the only
light that turned on was the green G/Gaming mode light in the top right
corner. I tried uninstalling synapse and and reinstalling it, holding FN
while plugging the keyboard in, and trying to use it on another
computer, but to no success. Nothing is working. I have submitted to
razer with the issue, but at this point my razer anansi is bricked. I
have seen this issue posted about, but none of the solutions have
worked. Any help would be greatly appreciated, because at this point my
computer is unusable because I have no working keyboard. Thanks!