A guide to the GW2 Living story Refugee Volunteer events and achievements introduced as part of the Flame and Frost prelude patch. Updated Feb 18, 2013.

. Here’s some context on how it works (Bobby Stein- GW2 Lead Writer)

In addition to the Refuge Blacksmith and the Refuge Rancher from Feb 4, there are now two more NPCs that will talk to your briefly.One of them is the Refugee Steadholder talking about Dredge attacks and the other is Refugee Primus talking about attack by Flame Legion. The refugee camp in Black Citadel is also infested with rats. 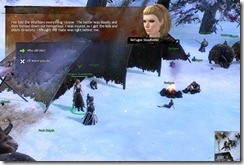 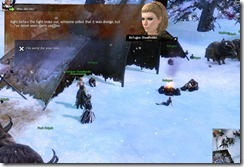 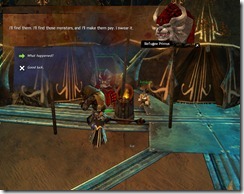 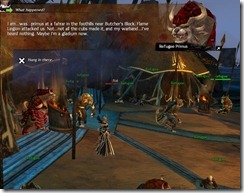 There were no additional refugee NPCs to talk to this time but both refugee coordinators in Hoelbrak and Black Citadel have some new stuff to say.

Black Citadel Coordinator warns of Flame Legion attacks that took over all the ranches in NW corner of Diessa Plateau. 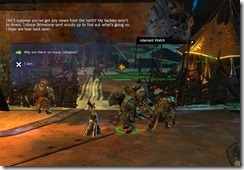 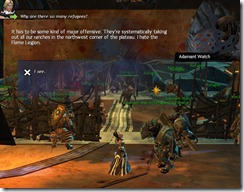 You can also help “sick refugee’s” for credit.

When 75/75, relog and receive the reward (Karma Gain item)

Actually you get it when you are on a non-overflow map.

You can also assist the limping refugees and also revive some of the refugees. There’s also a steam geysers event that can occur which I think will also award you “acts” I saw the event happening around Breakneck Pass.

cool ty, I will check it out 🙂

not atm. but in future we will be able to trade a certain number of acheive points for one laurel a time

Eat the drawing? Well that’s just mean! They worked so hard on it!

Right?! I am saving mine.

HIS SILLY FAULT FOR DRAWING IT ON RICEPAPER THEN ISENT IT…, STUPUID KID!

There are also some events that provide progress for the achievement, e.g. there is one at the second checkpoint (Breakneck Pass) where you need to kill ice elements.

Does anyone know when the Diessa event will start?

It will start later in the day, you will get a mail when it begins. see above 🙂

Just found a bunch of steam vents near Solitude Waypoint, pretty sure those are new.

I think the letter is bugged for some of us.. Relogged. Changed zones. Went into non-overflow map. Exited client and came back. Switched maps again. Nada.

Got the title ‘Volunteer’ as soon as I was done with the 75 helps, but no letter.

Correction: The letter only appears to the character who actually finished the 75. I had to switch to get it done. Once collected, the child’s drawing is account-bound and can be deposited in your bank.

I did all 75 acts on a character, got the achievement, forgot about the letter. I got the letter some time later on a different character.

Is there any benefit to doing more after you have finished the intial 75?

I’m not 100% certain, but the dead merchant seems familiar, like he was already there. He may not be part of the event.

after completing all the refugee stuff in wayfarer you can change char and do it again btw.

There is a blue dragon painted on the wall. North from Horncall Waypoint in Wayfarers Foothills
past the memento collector, after the third Fallen refugee, look at the wall on
the left side of the cliff. I don’t recall seeing this one before.

Missed a fallen refugee under a tree, sort of hidden in some bushes. http://i.imgur.com/2IYi88R.jpg

how to start the 2 events plz ?

refresh the post, I put a section about how to start the event 🙂

location of one of the rupture events in Diessa

The event is basically the same only with Earth elementals rather than ice ones.

Heralds in the game. Lion’s Arch and The Grove

adding another for the “conversation” of the Grove herald, its basically the same.

For me it is the herald in lion’s arch and queensdale exit. I guess it is race specific. I got a mail from the Queen herself heh

Oh and theres a “refugee coordinator” in the Black Citadel (shows up on the minimap as an orange star) who tells you that a group of soldiers (who I assume are the refugees behind him) were run out of their posts by Flame Legion, but he’s awaiting their statements.

Also the Black Citadel herald by the Asura gate says that Wayfarers is having dredge problems, though I don’t think any more events have been added there.

Hmm weird, both heralds in Black Citadel says the same thing me and there is no mention of the soldiers 🙁

It’s not the Herald that talks about the Flame Legion, it’s the Refugee Coordinator.

Hmm just read what Bobby Stein said on the GW2 forums. Looks like the mention of dredge will be a hint at some of the upcoming changes as the living story plays out.

Why does he say “The herald system works.”? o.O

Second Diessa Plateau event, the one stuck it on the wiki. Each race gets a different mail, doubt it’s worth listing: http://wiki.guildwars2.com/wiki/Flame_and_Frost_mail

I think you got the rest of the content covered.

thank you, I added the map in 🙂

when are you awarded a Laurel?

Correction: You get the Volunteer title immediately upon completing the 75 ‘acts of assistance’. The letter with the child’s drawing isn’t a necessary component of that.

Just noticed this yesterday – in Lions Arch, on the bridge leading to the entrance to Gendarran Fields, there is a woman named Jennivere Borden. When you talk to her she asks if you’ve seen a family with three children (one newborn) among the refugees. She tells you that they were run out of their farm by marauding pirates in the Gendarran Fields and should have been travelling south with a trader, but she hasn’t seen any sign of them yet. Haven’t explored Gendarran for this family yet, but could this be a quest? Image of Jennivere: http://imgur.com/VjsOnOQ

ooh! Interesting. I will check it out thanks 🙂

She is not related. There is a wiki entry on her dated from back in dec of last year. http://wiki.guildwars2.com/wiki/Jennivere_Borden