A dissection of the Rise of the Hutt Cartel: First look  trailer that features the planet Makeb.

The trailer is located here.

This was the Makeb lore posted by Allison Berryman on Dec 19, 2012.

The people of Makeb have remained neutral in wars between the great political powers in the galaxy. Relying on their wealth, isolation, and an army of mercenaries, the citizens have enjoyed centuries of prosperity. However, in the midst of the current galactic conflict, the Hutt Cartel has recognized the planet as a crucial stepping stone to increase their organization’s standing and reclaim the strength of their ancestors’ empire. They’ve hired Makeb’s mercenaries away and have made the citizens prisoners in their own homes, forcing them to reach out to the Republic in a desperate bid for rescue.

The Republic recognizes the Cartel’s seizure of Makeb as a bid for galactic power. With victory over the Empire seeming possible for the first time in decades, Supreme Chancellor Saresh is determined to respond to Makeb’s request for aid to stop the Cartel before they can become an even greater threat and compromise the Republic’s chance for victory.

Taking advantage of the chaos erupting between the Hutt Cartel and the Republic, the Sith Empire makes their own bold play for the hidden power of Makeb, seizing their chance to regain some of the strength lost to internal struggles and at the hands of the Republic’s military resurgence. They plan to outmaneuver all their enemies to usher in a new era of Imperial dominance.

1) At the start of the trailer, we see a shot of Makeb surrounded by several large starships. The model of these starships certainly looks a bit weird, with cargo like structures hanging off the sides.On the surface, Makeb should look like the concept art released on swtor.com

2) Then we zoom into what appears to the landing shuttle for some place, perhaps the first contact point for Makeb. This place looks similar to one of the locations featured on the high res screenshots released on swtor.com

3) The video then switch to an impressive shot of a battlecruiser floating in midair. There is an impressive array of armament on board. Currently it is unknown what is the purpose of this battlecruiser. However, if you look at the Rise of the Hutt Cartel wallpaper, there is a picture of it on fire. Perhaps we will get a chance to destroy it in some manner. 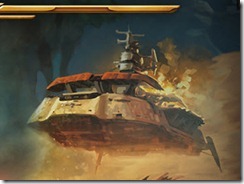 4) Back to the planet, we see an urban setting with armed guards going from house to house arresting citizens. The armed guards are all wearing the Hutt Cartel outfit which I will describe in detail below. I think this concept art from swtor.com give you a good idea of the size and theme of the “city” on Makeb.

5) The next frame shows the Makeb wildlife and a  familiar creature – Makrin. This is actually a full sized Makrin creature and you can get a seedling version of it as a pet by pre-ordering Rise of the Hutt Cartel. The small creature to be right looks like a lizardbat, a model similar to the lizbardbat pets that you can get ingame. 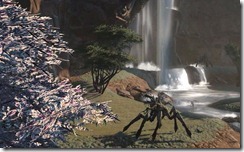 6) The focus shifts to the industrial district of Makeb. This high res screenshot on swtor.com looks like it is a view from the top. 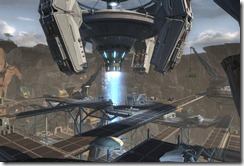 7) Next we get  a shot of the Hutt Palace/Garden, possibly the home of the Hutt Lord itself. It looks very European in its style.

8 )  It looks like a group of rebels are fighting the Hutt Cartel.  The weapon they are using is nothing special. It is the standard Sentry Rifle/Sport Rifle wielded by NPC mobs. There is a moddable version of it that you can obtain from the end of the agent story on Hutta (Red Blade Carbine) 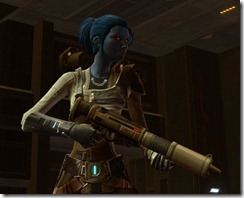 The outfit worn by the Hutt Cartel soldiers is new and it looks like there are two versions of it. There is the “heavier” version with the protective mask and a “light” version featuring a beret. There is also a female version of this “heavy” outfit a few video frames ahead with a bit different coloring scheme and no butt-flaps. 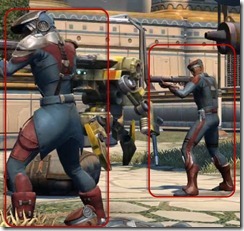 9) In the next frame, you will see something interesting on the left. This looks like a super weapon/drill of some sort. The video then zooms in on the inside of some structure, perhaps the control station of this weapon/drill?

If you look at the wallpaper for Rise of the Hutt cartel, you can clearly see the potential of this weapon/drill.

10) The frame after that shows what I think is the spaceport for the “city” in Makeb. You can see small shuttles flying in/out. This was the background used for this high res screenshot on swtor.com 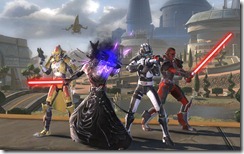 The armor and weapons used by the four characters on the high res screenshot is interesting. The 1st and 3rd character from the left doesn’t have new armor models. They are using the Empire version of the rated War Hero Combat Tech with colors unified to the chestpiece and the Empire version of Elite War Hero Field Medic respectively. I have not seen the armor worn by the 2nd and 4th characters from the left.

The weapon used by the Imperial agent is an existing model – you can find it on the GTN as Prototype Huttese Sentry Rifle. I am not sure if there is a moddable version of it.

11) Here we see a frame of the nobles placed in front of a firing squad. The clothing they are wearing is similar to the Alderaan social armor – Ulgo Noble, but not identical.

12) After showcasing the planet and the civil unrest, the trailer shows player characters getting involved. The first shot is a Republic speaker (Supreme Chancellor Saresh) with two troopers behind her. They are wearing a recolored version of the Republic Champion PvP armor (no longer purchaseable ingame). 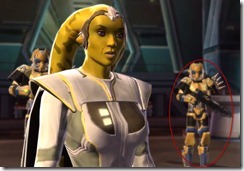 12) There are a lot of characters here so lets take a close look at their armor and weapons. 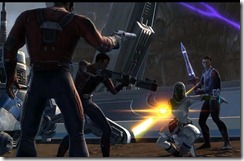 14) This is the robot boss we saw in pretty much every Makeb trailer. My guess is that it is something central to the Makeb story. It doesn’t look like an operation or flashpoint boss since you only see one character engaging it. 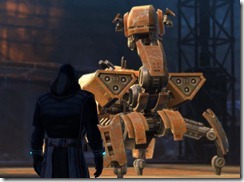 15) Looks like we get to destroy part of the Makeb city/Hutt Palace. This is a group of players running out of an explosion. The leading trooper has the Thunderburst Dual Cannon from one of the cartel packs. 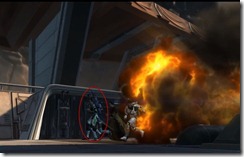 16) Next frame has a sentinel whacking on a poor Hutt Cartel guard. The guard is using The Headhunter rifle (Rakata sniper rifle). The sentinel is wearing the Conservator set from Skip Tracer’s cartel pack (sans helms) 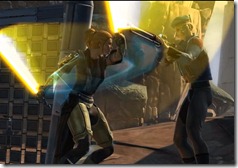 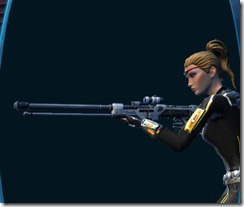 17) Up next, we have a bounty hunter shooting a pistol. The pistol is Dead Guard  Combat Tech’s Blaster with what looks like the Dread Guard Field Medic (Republic) set.

That is all for this trailer, there are two other trailers with some Makeb footage in them.

The first one is See the Future the Old Republic! back in August 2012. This has a small scene with a small robot army on the bridge that gets dropped to their death. Pretty entertaining to watch but doesn’t show much.Since Makeb is made up of ridges (see concept art), it makes sense that there will be bridges like this that allow them to travel between the ridges.

The second one is the EA announcement trailer back in June 2012. It reveals two players, one a Jedi Guardian, and another Sith Assassin killing droids and Hutt Cartel guards. The Jedi Guardian is wearing an armor very similar but not identical to the current Campaign armor (the shoulders and the chest area are slightly different). 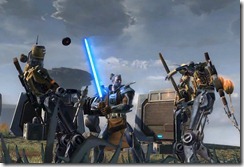 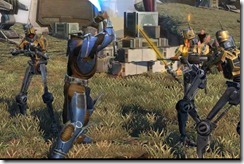 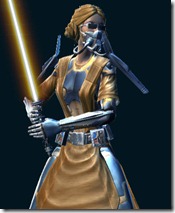 The Sith Assassin is using an armor that I don’t exactly recognize. It is not the same as the inquisitor armor showed on the high res screenshots either.It has a bit of resemblance to the Dread Guard top. 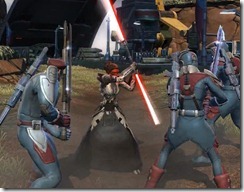 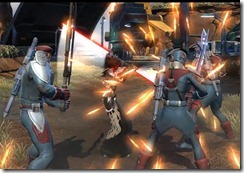 The last set of video frames I want to mention are these two, showing a Juggernaut using the turrets to destroying an enemy holdout inside the city. Looks kind of fun. 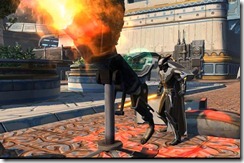 Awesome stuff thanks dulfy. I hope they introduce more armour skins though and not reuse the old stuff to much.

The animation that the sith assassin is doing can be found on mobs in Section X, some sort of channeled AOE ability.

Great job dulfy, just a couple of things:
The guardian armor which looks like campaign but isnt is the War Hero Sentinel chest…
The sniper probably isnt the cartel market one but the Rakata Sniper, exactly the same minus scope.

Hey, you are right about the sniper rifle, the image there has a double scope (I didn’t notice it first), which would make it the rakata rifle instead of the cartel market one.
The warhero weaponmaster though, looks alot different so I stil think it is the more similar to the campaign one.

FWIW, the Sentry Rifle you refer to in bullet #8 IS moddable…it can be bought from the Equipment Vendor of the first planet(s). I don’t have the specifics in front of me, but I use that weapon exclusively on all my toons/companions that use Blaster Rifles.

Sorry, DK/Coruscant iirc…was in a rush. I will try and find the exact vendor tonite.

Bah, my age must be creeping up on me again…
Although I swear I purchased it because I like it so much, I cannot find where (if I did at all). But, it IS avail in game as an orange moddable, at least on the Imp side. One is called the Red Blade Carbine (which I believe is the Op class item), and the other is the Black Talon Scout Rifle (which drops in droves in BT). I will keep looking when I have time on the purchasable front.
Also, the rifle at the bottom of bullet #10 is the Trooper Vanguard moddable class item. I’m using it currently on my lvl 23 Vangaurd…and it’s white/light gray.

Isn’t it just the orange one the imperial operative gets from completing hutta?

Finishing Hutta on my agent alt now, will know in a bit i guess 🙂

All re-used skins cept 2, awesome way to start the xpac

This is a trailer showcase the planet, they may not have the new armors ready when they made the trailer.

Dulfy, the ships in the first picture are mandalorian, I believe, because they look exactly the same as the one mandalore lives on (As seen in BH story). Which would explain the mercenaries in the lore bit.

Ah thank you, I will add that bit in 🙂

#17 is a scoundrel in the DG Field Medic Suit with the DG Blaster Pistol. I wear it on my scoundrel.

[…] the upcoming changes and additions to the game and Makeb. If you haven’t read it, head on over here to Dulfy’s site and check it […]