Guide on Dreadtooth, its connections to Dreadful Entity in the TFB secret cave area, and the Dread Slayer title.

The mystery of the secret cave in 16m Hardmode TFB and its connection to Dreadtooth was revealed earlier by members of the Carnage Gaming raid team.

Dreadtooth, the world boss in Section X, killed at 10 stacks (requires a 24 member raid team) drops Dreadful Amulet. This Dreadful Amulet can be brought into the secret cave area of 16m hardmode Terror from Beyond  (before the second boss, near a bridge) to spawn the secret boss known as Dreadful Entity. Any instance of 16m hardmode Terror from Beyond will work for this, even if it is cleared already.

Dreadful Entity, once killed, drops the Dreadful Orb and reward players with the title Dread Slayer and a codex entry with the same name. It is currently unknown what Dreadful Orb is used for.

Dreadtooth has 4 tiers of difficulty depending on the number of stacks of Dreadful Resurgence buff it has.

A comprehensive video and guide for Dreadtooth can be found here.

Dreadful Entity can be spawned in the cave just under and to the left of the bridge in 16m Hardmode Terror from Beyond that leads to the Dread Guards boss. Players approaching the cave will receive a red message on their screen alerting them to a chilling presence. Everyone in the raid must be wearing Dread Guard’s Corrupted Mask, which drops from any difficulty of Dreadtooth. This mask protect you from Dreadful Entity’s Dread Touch ability, which is assumed to be an instant kill ability. 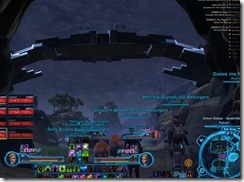 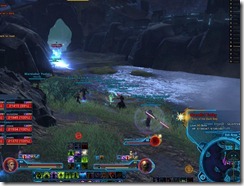 The player with the Dreadful Amulet will need to head inside the cave and click it to spawn Dreadful Entity. This person will be stunned until Dreadful Entity is pulled away by other members of the raid. 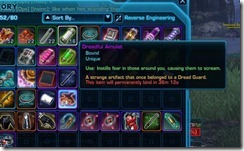 Dreadful Entity is a very easy boss compared to Dreadtooth 10 stacks. You will need the standard 2 tanks, 4 healers, and 10 DPS. 2 sorc/sage healers is recommended for the AoE healing bubble. Your entire raid will be kiting Dreadful Entity a fairly long distance.  Here is the path we took (towards the raid entrance). Melee DPS will take a bit more damage than ranged DPS due to their proximity to the ground AoE spawned by the boss (more on that below). We did not engage Dreadful Entity until we pulled him around the corner to prevent us from getting pushed into exhaustion zone. 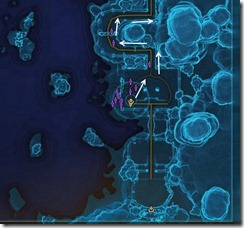 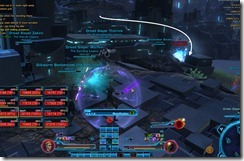 Dreadful Entity has 6.2 million HP with an unknown enrage timer. Most raids will have killed him within 9-10 minutes. He also has two buffs on him.

In terms of debuffs on the raid, everyone will receive a debuff called Pulse Guard, which caps out at 10 stacks. This buff reduces the damage from Dreadful Void (the AoE orbs left on the ground by the boss) by 5% per stack for a damage reduction up to 50%. In addition, everyone  will receive a Dread Touched debuff, making you immune to the Dread Touch attack (huge knockback + 5k damage) until it wears off. Despite these being debuffs, they are actually beneficial.

The tank tanking Dreadful Entity will receive a debuff called Lingering Shock. It persists for 30s and increases the damage taken from Shock by 2% per stack. Our tanks swap once this counter reaches 6 but it is an arbitrary number.

Dreadful Entity seems to have 4 attacks

The overall strategy of the fight is to kite the boss around, moving every time you see an orb dropped on the ground. Entire raid should be in front of the boss so that no one is in the vicinity of the Dreadful Void (boss does not have a cleave). DPS on the boss will be low initially but gradually picks up as stacks of Ancient Slumber wears off.

Tanks will need to swap as they get increase stacks of Lingering Shock. We tank swapped at 6 stacks but it is an arbitrary number.

Of the four healers, you will want two on raid healing, dropping AoE heal bubbles. The other two can focus on tank healing and raid healing as needed.

This is fairly easy fight so if you killed Dreadtooth at 10 stacks, this one should be a walk in the park.

So the Dreadful Orb is yet another mystery to solve.

Guess the story of the “strange and chilling” cave is not yet over.

Maybe it has something to do with the Dread Masters?

I love how much thought and planning has gone into this whole chain of events.

So.. as much as this is create news, Carnage Gaming needs to get a shot out for doing three world’s first in one night, whose with me?

After we got Dreadful Entity down last night the few of us who stayed up decided to do some theory crafting. We have some idea’s that will be tested soon 🙂 hopefully more streams to follow shortly.

Looking forward to see what comes out of it 🙂

Can’t wait to see it, Netto. I’ll be cheering you guys on from the cheap seats. 🙂

Did you try using it on the Loot Portal at the end of TFB HM’s final boss?

I am missing Dreadlocks.

Everything else beginning with Dread* is in the game. Very creative BioWare.

Great effort and kudos from Germany, Carnage Gaming! What an achievement, I don’t even know if I’m more awed or more envious! 😉

in reading the post from swtor.com about the new reputation legacy, i would guess that the orb is one of the potential trophys… see this… http://www.swtor.com/info/news/blog/20130205

ooh, good catch! Since there is a rep for the Section X stuff this could be it.

The dreadful orb isn’t a trophy. Since it’s not consumable and has a 23hr cooldown. There’s more to the mystery. It’ll just take some time to figure out.

Thanks Carnage Gaming. Memories of Xendor now has the orb. We will let you know if we figure anything out.

Congrats to Dulfy, Hatred, and APEX on world 3rd.

Dulfy and everyone, Unnecessary girth downed DT at 10 stacks 2/12/2013. i dont have reddit so i cant post it. we streamed it.

also we got a pet from 10 stacks dread tooth. Dwedtoof. idk if any other guild has gotten this

Hmm Friendly Fire also got a pet when they downed him. I wonder if it is a 100% drop

We downed him twice, and everytime there was a pet as loot. So I think it is a 100% drop.

I think it would be helpful to rephrase “secret boss can be summoned only once 23 hr” – We assumed that the boss would be summoned once and then reset to his original position if we wiped. That is not the case, and you can only attempt the boss once per day per amulet.

I have run this over 100 times and still no mask, there must be a bug.

This guy doesn’t drop a mask, so there’s that.

at 1 stack, my buddies and I were three manning Dreadtooth, and 3 times we got one shot by (Defeated by Dreadtooth 0 dmg).

Little late to the party, but was everyone close to him when the fight started? Not = bad news.

You are likely dpsing him too slow. When you engage Dreadtooth, everyone gets a debuff that allows you to fight Dreadtooth, which is why everyone needs to be in his vicinity before engaging. The debuff is on a timer, and when it runs out, you will get one-shot by him.

Dulfy, how many people would you say you need for 10 stack dreadtooth of progression level raiders who have cleared 4/5 in DF and DP? Think 16 manning instead of 24 is possible?

If you are still wondering, a guild on my server (before they transferred) had 15 manned 10 stack back in just UW and some KD.

Is it true that you need to kill Dreadtooth 10 times to get “essense”, some guy told me this when I was trying to set up a group for a ten stack Dreadtooth. If so,does only one guy needs to have the so called essense or the whole group? Couldnt find the info in this post cause Im probably dumb, but can anyone tell me if this is true or Im being trolled. Im pretty new to the game so I would need some help. Thanks a lot.

I think you do need 10 (or at least 9 anyway) essences, but multiple people can apply the essence, so it does not need to be on just one person. It is tradeable anyway — our guild keeps it in the guild vault.

Dulfy, do you plan to write a guide to summon and defeat the Hateful Entity in Darvannis 16 NiM ?

Since it is not mentioned in the guide, the Dreadful Entity is interruptable. Specifically, you can interrupt the Dreadful Awakening cast, so you can prevent the boss from getting too many stacks. The cast is very short (1.5 seconds), so you may sometimes not be able to interrupt it, but most of the time it works.

Also, with more stacks, the cast time of Dreadful Awakening is shorter, so if you let three or more casts through, the cast will be instant and can no longer be interrupted. Still, if you can interrupt as many times as possible, you’ll get more time to DPS the boss before the stacks get so high that someone may die from it.