Lockouts: Standard operation boss lockout. 8m and 16m shares a lockout while storymode and hardmode have separate lockouts. There is no nightmare mode (yet). 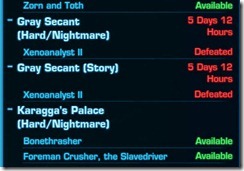 Gear Requirements: You will want 186 gear for storymode and probably full 192 for hardmode. There isn’t bolster inside the operation instance so you will need to be L60 as well.

You will encounter this mechanic shortly after engaging Xenoanalyst II. It is a 90 second channel during which you must click on the purple panels located around the boss. There should be 3 clickable panels in 8m and 6 clickable panels in 16m. Each person can only click on one panel as they get a debuff after clicking on the panel that prevents them from clicking on another panel. When the boss is channeling this ability, he will not attack or use any other abilities.

Once everyone clicked on their panels, there will be a raidwide AoE called Problematic Energy Eruption. It says for about 20k on 16m storymode. Group up after this AoE hits for heal up. Tanks should taunt immediately after everyone clicked as the boss have a tendency to swap aggro to another raid member.

Tip: Reader Yogi pointed out that you can have everyone click all but one of the buttons. Then have the offtank click the final button while rest of the raid hide behind pillars to LOS the AoE damage.

This is a 10 second channel that hurt a bit in storymode. There is no need for tank swap here as this attack does not put a stacking debuff on the tank.

If you kill the datacore on time, the boss will be disabled temporarily and won’t attack (he will have a red aura around him as if he is enraged). 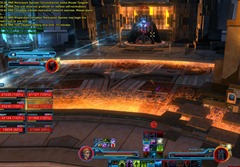 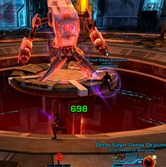 This phase is very similar to phase 1 except during Problematic Solving Evaluation, groups of 4 adds will rush out (Xenoanalyst II will summon these adds with the ability Species Comparison) These guys have 100-200k HP and die fairly quickly. It is best if you kill the adds first before clicking on the panels. Note that sometimes instead of the Akk Dogs in the picture, a group of Jawa adds can spawn. These are much easier to kill.

Phase 3 triggers when the boss is slightly below 20%. During this phase, the boss will cast Generate Urgency, a 3 second channel that finishes off with a huge attack on a raid member. Tanks must taunt during this phase to keep the attack onto themselves. This is a similar mechanic to Terror from Beyond where he frenzies in the last couple % and attack random raid members.

On storymode, you will get a short break when this phase kicks in as the boss will actually announce it and stop attacking for a few seconds (red text on screen. Loading Final Evaluation –> Execute!

Enrage timer seems to stop once you reach this phase (i.e. the boss’s buff that state the enrage timer is gone when you get to this phase).

Very similar to storymode, except all 6 panels are clickable right away. Problematic Energy Eruption at the end hits for 20k damage.

Tanks should taunt immediately after everyone has clicked and everyone should stack for AoE heals.

Tip: Reader Yogi pointed out that you can have everyone click all but one of the buttons. Then have the offtank click the final button while rest of the raid hide behind pillars to LOS the AoE damage.

Unlike storymode, this attack is actually quite lethal. During this channel, Xenoanalyst II will apply a stacking debuff on the tank called Severe Burns. This last for about 1.5 minutes and causes 20% more damge taken per stack. One channel of Thermal Tolerance will give the tank 10 stacks of this debuff, increase the damage they take by 200%. Tanks must use cooldowns to survive this and the other tank will need to taunt during the channel so the boss swap tanks immediately after the channel.

Tip : Reader Lakedaimon & Yogi pointed out that you can use LOS trick around a pillar to avoid the debuff. Sorc/sage healer can stand next a pillar and pull the tank when the boss starts to channel Thermal Tolerance. Alternatively, tanks can also Force Speed or Leap to someone near a pillar to hide behind it.

Tip : Reader Poison suggests that during this debuff, Shadows/Assassin tanks can use their in combat stealth to LOS Thermal Tolerance.

In hardmode, the Power Cores have more HP while the Environmental Awareness duration remains at 30 seconds.

Much like the phase 2 in storymode, 4 adds will spawn during Problematic Solving Evaluation. In hardmode, they more HP and hit harder. It is therefore crucial that you do not click on the panels after all the adds are eliminated. Note that sometimes a group of Jawa adds can spawn and they are much easier to kill.

This phase is very similar to phase 2, except the adds that spawn during Problematic Solving Evaluation are replaced with 4 Simulated Terentalek. These guys hit very hard so make sure the tank with the Severe Burns debuff doesn’t tank them or they get one shotted like in the video.

One trick mentioned by reader Elycia that is very useful to deal with the adds is to have a tank kite the four adds (since they move very useful) while the other tank single out one add at a time for the DPS to burn them down. 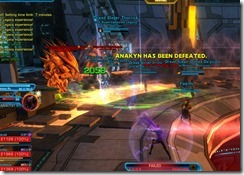 If you reach a third Problematic Solving Evaluation, you will get a third wave of add. this is just a Simulated Rancor that hits pretty hard. Kite the rancor and make sure you do not click on the panels until this rancor is dead.

Phase 4 kicks in at <20% and is identical to phase 3 of storymode except Generate Urgency hit harder. Enrage timer seems to stop once you reach this phase (i.e. the boss’s buff that state the enrage timer is gone when you get to this phase).