An overview of the SWTOR commendations and currency changes currently on the PTS for patch 2.0.

Update April 7, 2013 – Weekly cap for various commendations was adjusted and this change was reflected in the guide.

This unified system allow you to do quests on any planets or PvP to earn planetary commendations. Once acquired, you can spend them on the fleet or on the individual planet vendors.

Note that not all of the planetary vendors have the following items. This is just a general list.

Cap: This commendation have a storage cap of 400 with a weekly cap of 200.

In addition, any unassembled Columi/Rakata/Campaign pieces can be exchanged for Classic Commendation containers (small ones contain 75 Classic Commendations). The vendor is on the Ziost Shadow Mission Deck for Empire players (Equivalent one for Republic) next to the Medical Droid. 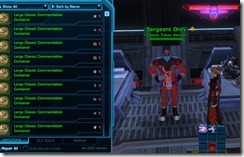 They can be spent on the Classic Gear Vendors on the fleet, which offers Campaign gear in exchange for Classic Commendations 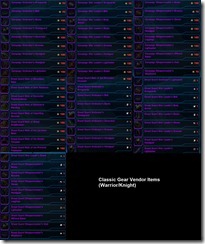 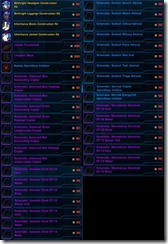 All previous level 50 gear such as Tionese, Columi, Rakata and Black Hole had their vendors removed (Campaign Amorings are also removed). Campaign/Black Hole is now the lowest PvE tier for level 50 characters.

Basic Commendations are the new leveling currency for level 50-55. These commendations will grant you access to starter Level 55 purple gear at the Basic Gear vendor.

Cap: This commendation have a storage cap of 600 with a weekly cap of 300.

Can be spent on the Basic Gear vendor on the fleet for the following basic Level 55 purple gear. 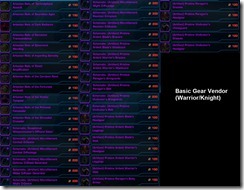 These Commendations are acquired from Level 55 Operations (storymode), hardmode flashpoints, and weekly missions. These commendations will allow you to exchange for Black Market gear at the Elite Gear Vendor. Arkanian gear (similar to Black Market gear but has set bonus) is purchased via tokens exclusively.

Cap: This commendation have a storage cap of 400 with a weekly cap of 200.

You can see stats of the Arkanian gear here.

Ultimate Commendations are earned via hardmode/nightmare Level 55 operations and allow you to purchase Verpine gear, which have no set bonus. Underworld gear is obtained via tokens exclusively.

Cap: This commendation have a storage cap of 300 with a weekly cap of 150 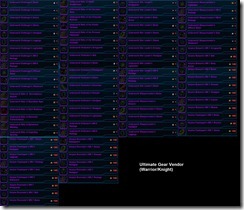 You can see stats of the Underworld and Verpine gear here