An overview of the PvP Gearing changes in patch 2.0

With patch 2.0, War Hero and Elite War Hero PvP gear are no longer being sold. Instead, there are three  new armor sets.

In addition, expertise no longer have a diminishing returns but now have a cap (2018) that can be reached with a full set of Partisan/Conqueror gear (both gear sets have the same amount of expertise)

Here are some comparison between the Partisan set vs War Hero and Conqueror set vs Elite War Hero. As you can see, there are more primary stats, more expertise, and different secondary stats. 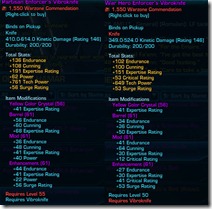 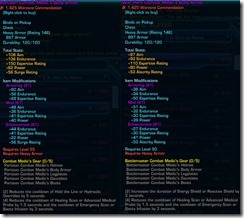 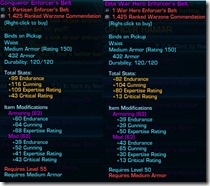 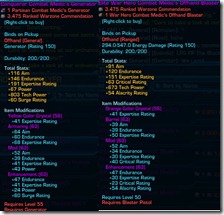 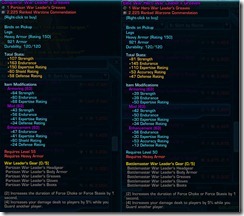 *Remember that there are 2x Relic and Implant slots

Note: Every Conqueror piece requires the equivalent Partisan piece for exchange except for relics, implants and earpieces.

*Remember that there are 2x Relic and Implant slots

Even the Conqueror relics, earpieces, and implants require Partisan counterparts to trade in?

Good catch, those don’t. I will make a note 🙂

Wait, you mean you will NOT need the counterparts, or that you WILL need them just as it is now.

BTW, any idea whether will be able to trade the current WH, EWH for something. Or will the never-ending 28k rwz comms grind start again?

It would seem that EA/BW thinks that gear grind id the best way to keep people busy. You apparently will never be able to relax and enjoy the fruits of your labor because EA/BW will delete or make your current fruit worthless.

You realize that you’re talking about a game?
Labour should not be mentioned. You’re playing PvP because you want to…

Ya, exactly. Maybe it has something to do the new bolster system?

I just think this might lead to some problems, because the Underworld hilts and barrels have a lot more weapon damage than their Conqueror counterparts. And I doubt that 68 Expertise on those pieces is enough to counter that difference.

There is no diminishing returns on expertise now, only a hard cap. So removing any expertise from gear is a bad idea in 2.0.

But does this mean that 1950 or 1882 (for dual wielders) is worse than losing a LOT of weapon damage compared to 2018 Expertise? I have my doubts. I’ll personally consider having 1678 Expertise with a PvE set bonus and a PvE hilt (or even a PvE off-hand armoring making it 1610 Expertise). I guess only testing will show if it’s worth it.

\
Does anybody know what crafting material drop these new 61,63 mods after reverse engineering? It’s important because a lot of people are farming warzones just because of molecular stabilizers droped from WH gear.0
\
Yittlic @ BC Alexander • a few seconds ago

Too bad for PvPers:-(

This is a huge help, thank you! It appears I should just start banking WZ and RWZ comms instead of wasting my money on soon to be obsolete EWH gear. Might as well bypass the Partisan Ears, Implants and Relics and go straight to the BIS Conqueror pieces… that’ll save nearly 2,000 WZ comms.

How do the new PvP relics look? the reduction in static power on the new PvE ones makes me wonder if PvP relic will be BiS once again.

hmmm… so how does the pvp work now, is 50-54 relegated to the status of “sub-55” or works as entire own bracket of levels? and what about “starter” sets? I assume that player with recruit gear that today has hard time against geared enemies would be even more easy prey for partisan-geared ones (or better), and there will be no (elite) war hero to buy?

There isn’t elite war hero or war hero to buy. Not sure if we will get a starter set or if the new bolster system will take care of that.

hmm…what do i do with the WH i have ? can i return it and get Comeds like on pve gear ?!

Don’t think so. Only ones you can turn in for warzone comms are battelemaster and champion unassembled pieces. You will still need WH for PvPing as you won’t get all of the partisan/conqueror stuff right away.

seems to me all that qq on the forums about stun stun and instance death whas heared by the defelopers,however if you see the difference in endurance i believe they went completly overboard on this one

Judging by what was said here: “With patch 2.0, War Hero and Elite War Hero PvP gear are no longer being sold.
Partisan (L61 mods) – purchased with normal Warzone Commendations (Require Level 55 to use)”
so….if Partisan will be on par with WH.. then fresh new pvp 50 will be screwed. At 50 you use the comms you have been collecting to start kitting up your toon in WH….by what ive read fresh pvp 50’s in 2.0 will then have to grind 5 extra levels to get the equivalent of WH (to ba able to wear it)

No because bolster is going to be adding expertise in 2.0

Or are they keeping WH and EWH in but able to buy with credits instead?…

They are not keeping WH/EWH. Vendors are gone.

Do you know all this 2.0-patch-information by having played on the Public Test Server?

Thank you very much for generously summarizing and sharing all this data! 🙂

What about those people who do NOT buy the expansion??? are they stuck with whatever level 50 gear they currently have. If I have some WH gear and there is no EWH vendor how do I upgrade???

Does anybody know what crafting material drop these new 61,63 mods after reverse engineering? It’s important because a lot of people are farming warzones just because of molecular stabilizers droped from WH gear.

If they drop the ‘usual molecular stabilizers’ then you can still farm WZ for partisan gear to make the 27 mods (lvl 63)… am i right?

WIll there be crafting scematic sets for the eleite war hero set? Like the battlemaster before?

They require lvl 55 to use, but can you only purchase them at lvl 55?

This is a pretty important question. It is going to stink having capped comms at level 50 having nothing worth purchasing for 5 potentionally long levels. They should just leave the EWH vendors in the game purchasable for reg comms.

I can confirm that on the PTS, lvl 55 WZ gear is only purchasable at level 55.

Sorry for bringing this up again but as a f2p player I can’t
poste this question in the forums so I was hoping to get an answer and/or help
here.

The question if the new pvp gear is only buyable at lvl 55
or earlier is kind of important to me because I have already hoarded the max
amount of comms and was originally intending to keep them until the patch
launches and the spend them all on the new gear to get a nice head start. But
if I can’t buy them from the start and only when I hit lvl 55 then spending my
comms now and restocking via pvp matches as I level up sounds like the more
intelligent course to me.

Or am I seeing this wrong?

Hey is there any changes to the PvP relics listed by chance?

Will our current comma carry over from now to be able to have a head start towards the new gear or will they require a new set of coms alltogether. For instance am I better to buy wh gear now or save the comms for when I hit 55

Just a note on the new bolster mechanic.

I am really not a fan.

They have changed the stats on PvP armor so that it is much less effective in PvE but then they turn around and decide to give ‘free’ expertise for people who queue for Warzones in PvE gear!

I understand the desire to have players maintain two armor sets to track the progression in PvP and PvE separately, but they have ruined this by including expertise as part of the bolster mechanic; essentially massively favoring PvE progression over PvP gearing.

Expertise clearly needs to be part of the bolster mechanic for the lower level brackets as people have level 50 expertise gear left over from before 2.0 (or simply remove expertise completely from all existing non-level 55 gear) but I don’t think there should be ANY form of bolster for max level PvP.

Solution = Remove bolster completely from Lvl 55 warzones and add back in a set of ‘Recruit’ gear.

Currently extremely unhappy with the thought of PvE gear being a viable PvP choice while at the same time making PvP gear under-powered in PvE content.

Bioware has asked for feedback here: http://www.swtor.com/community/showthread.php?t=605288 , if you want to toss in your own two cents.

Dulfy,
Could you please reconfirm this to me? The PVP lvl 55 armor
is only buyable at lvl 55? And it will stay this way even when launched on live
servers?
That would mean hoarding
commendations before the 2.0 launch would make less sense than just buying the
best gear you can get right now and then restocking while leveling up to 55.
Anyone disagree?

Yes I can confirm that the new gear is only buyable at 55.

Oh yes they upped the expertise on wh and ewh, I will need to update those thanks

nice page – but could you please make a page with the pvp stats like you did it here (http://dulfy.net/2013/02/21/swtor-arkanian-and-underworld-level-55-armor-statsinquisitorconsular/) for pve? Thank you!!

Hey dulfy, can you tell me if in 2.0 we will still be able to buy the two pets and the mount (Longspur Recon) that are currently sold by the PVP vendors at the fleet? I wasn’t able to find any information concerning these items so I hope you could help me?

Very Helpful! Thanks Dulfy. Do you happen to know what is going on when you hit lvl 50 (or 55 as the new cap)? Does your “new to the cap” charicter get a set of Starter (*Insert new name here*) PVP and/or PVE Gear like they currently do with “Recruit” and Tionese?

I am quickly lvl-ing a slinger and I am wondering if I can race to hit 50….. get the free Tionese gear (use the comms since you get nothing for them at 2.0 launch)… then get another set at 55

Don’t think there is a starter set at 55.

So, can I do anything with the battlemaster gear and the few wh pieces I have? Do I trade them in or are they even worth anything?

Can’t trade them in. They are pretty worthless now. Use them to pvp before you get the new L55 pvp gear I guess

Any chance of some coverage about the actual changes TO pvp? I know I’m confused right now, because people seem to think going naked below 55 actually works best.

Where can I find Advanced Armorings 28x NPC vendor?

wish they remove the whole pvp gear thing. it’s a but unfair for us pve’s