SWTOR operation boss guide for Dash’roode, the first boss in Scum and Villainy, the new Level 55 operation located on planet of Darvannis. Both storymode and hardmode guides are available.

Dash’Roode is the first boss you will encounter in Scum and Villainy. Unlike other bosses, there are no trash before this boss. The mechanics for this fight is fairly simple and plays pretty much like a “tank n spank” fight with some interesting layers.

The environment plays a crucial role on this fight. The sandstorm places a stacking debuff on you and ticks for more damage the more stacks you have. Therefore, you must utilize shield generator stations scattered along the path and fight under shields at all times. You only get damaged from the sandstorm and get increasing stacks of this debuff if you are outside the shields.

At the entrance, right next to the shuttle, you will be able to find a Shady Character that sells you a Personal Environmental Shield for 500 credits. Purchase 2-3 of them as you will find a use for them while running to the boss and when you get “lost” later on in the fight. This Personal Environmental Shield last for 1 minute when used but has a rather long cooldown. 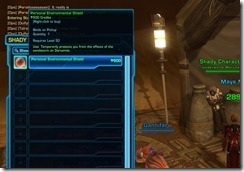 There are Environmental Isolation Field Generators scattered all along the Sandstorm Dunes (4 in total). This station will spawn a big shield that lasts for a minute and protect everyone under it from effects of the sandstorm. At the end of that minute, the shields will come down and one person in the raid will need to click on the shield to pick it up and carry it to the next station while the rest of the raid follows them. There is a timer on how long this portable shield lasts so don’t take forever getting to the next station. 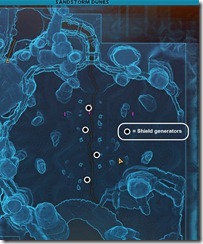 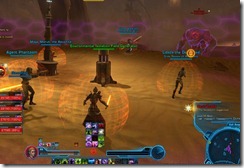 Do not step into the yellow circles that comes up when you have to move the shield generators. These circles will slow you down, causing you to fall behind the raid and get out of the protective shield.

While the raid is moving the shields from one station to the next, two players in the raid will get “lost” in the sandstorms and get ported to a random location in the Sandstorm Dunes (not too far from the raid). Scavenging Womp rats will spawn next to them.

These little buggers don’t hit hard but you will be taking damage from the Howling Sandstorm and the Womp rats. This is a good time to use your Personal Environment Shield you purchased earlier as you run back to the raid carrying these womp rats with you.

Dash’Roode only have one ability that affects the raid – it is massive knock back called Groundshatter. This will knock raid members up in the air and out of the protection bubble provided by the shield generator. Groundshatter deals about 5.5k damage and comes about every 30 seconds. 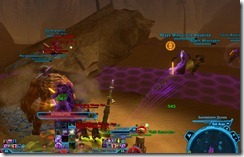 This isn’t a major thing but raid members should stack behind the boss after each Groundshatter for AoE heals.

This is sort of a frontal/cleave mechanic. Those standing in front of him will get hit with a kick for a lot of damage (~10k on storymode) and launched far in the air.

Dash’Roode does seem to have a knockback with his attacks so tanks should tank him next to a rock if possible. From time to time, he will knock the tank with threat into the air and stun them for a few seconds. While the tank is stunned, he will turn to the rest of the raid. This is a good time for the second tank to pick Dash’Roode up to do a “tank swap”.

The first thing you will notice on hardmode is that the Howling Sandstorm has a high chance to knock you down to the ground if you are on a speeder running to the boss. Rocket Boots works great here as an alternative. Generally you will get 2-3 stacks of the environmental debuff while getting to the boss. Do not waste your Personal Environmental Shield here since it has a long cooldown and you will need it when you get “lost”

In storymode, if you get knocked back or cleaved, it isn’t too much of a deal. However, on hardmode this can have serious repercussions due to the DPS lost from running back and the damage taken from the cleave (~15k on hardmode). For this reason, healers and ranged DPS should position themselves against the big rock you can find near every power generator. 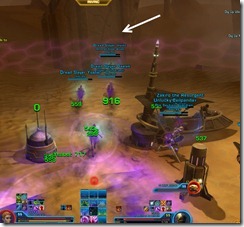 Melee DPS should always be in the back of the mob and never stand in front of Dash’roode. His Gutwrenching Kick frontal hurt and will knock you far away, resulting in DPS loss. Tanks can put their back against the shield generator and be quick to taunt Dash’roode and reposition him if one of the tanks get knocked in the air. 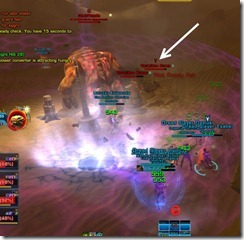 You get a red text on your screen when they arrive for the first time at the first generator. For other generators, they arrive as soon you plant the portable shield into the shield generator. For this reason, we don’t plant the portable generator until there is ~15 seconds left on the timer (Dash’roode does a pushback at 10-12 seconds so you want to place the generator before that). This give us more time to DPS on the boss.

Getting “lost” in hardmode is a lot less forgiving. The womp rats that spawn on top of you apply a Gnawing Bite debuff attack that will slow you down considerably and cannot be cleansed. Make sure you save your personal Environmental Shield for this as otherwise you may not make it back to the raid. If you do not have any sort of speed boost or escape mechanism, you may need to kill the womp rats before running back. 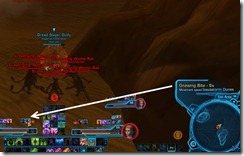 We typically have our offtank carry the portable shield when traveling between shield generators. However, if someone in your raid have issues in getting back to the raid, you may consider having them grabbing the shield generator instead as they tend to not get “lost” when they are carrying the shield.

As an escape mechanism from Gnawing Bit, the operative/scoundrel and assassin/shadow ability to get out of combat immediately causes the womp rats to ignore you and head to the group.

I was having an issue with this. The only two boss attempts that I used vanish, I would get lost twice. So it’s possible that vanishing resets that boss mechanic and makes it to where you can get lost twice.

It’s possible to get lost twice even as a sage healer. Just bad luck. Although I’m wondering if threat has something to do with who gets lost.

Downed HM a couple days ago with most still in full dread guard, so it was close but got it down. 🙂 We did a couple things differently:

Our group tried something different for positioning in HM. Instead of the rock we had the dps and heals put themselves against the field generators themselves and had tanks put their backs to the wall. Made it easier for our viewing angle but everyone has to be sure that the pushback from the boss will push them into the generator since it is smaller. Also the tanks had to be ready for tank swaps because if the boss moved across shield and then did a pushback, it killed the tempo.

Another thing our tank putting the shield down did it ~13 seconds. Any longer and the boss does a pushback that kills the channeling.

I don’t know if this is only in storymode, but our shield carrier did get lost. The portable shield vanished and we had to use our personal shield generators to get to the next generator.

Did the person with the portable generator step in a yellow circle on the ground while moving?

You are right, I miscounted. Thanks for the correction.

On this fight, my guild is kind of wondering if Dash’Roode hits the power generator with his cleave or not. I don’t know if you or anyone can confirm this? We figured it would be great to have the boss over there since those birds will come for those generators, but everytime we tried that strategy the generator got destroyed (which might be due to some of the DPS we had in our group :P) We did beat him with the SM strat though (while RDPS killed the birds). Still, would be interesting to know.

O I meant in Hard Mode.

No, his cleave does not affect the Generator. Only the bats attacking the generator directly will damage it. My guild has no problem having the tanks hold the boss with their backs to the pole next to the generator, which also puts them in range of the bats for an aoe taunt if necessary (though, if your range dps is good, it isn’t necessary). What we do is just keep 2 ranged dps full time on the bats, and the other 2 dps full time on the boss. This allows you to never have your generator destroyed, and keeps good damage on the boss.