SWTOR operation boss guide for Operations Chief  , the fourth boss in Scum Villainy, a new Level 55 operation located on planet of Darvannis. Both storymode and hardmode guides are available.

Operations Chief is a multi stage fight that requires you to infiltrate the Oasis City in groups of 2 before finally engaging the boss. The Infiltration stage requires stealth to avoid patrolling droids and a certain amount of group coordination.

To start the Infiltration, click the panel near the door to Oasis city. The timer starts as soon as you click the panel so do not click until you have prepped your raid for what is about to happen. 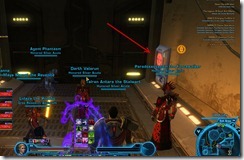 Your raid must divide into 4 groups, each with two players (on 8m). Groups with combinations of tank/DPS or healer/DPS work the best as the tank/healer can either heal through or eat the damage. You cannot do this part with more than 2 players per location (on 8m) as the mobs you need to attack have a buff that triggers the alarm if there are more than two players attacking them.

Each group need to be assigned a position on the map (Blue, Gold, Green, Red) and move to that location. Locations further up north such as Blue/Gold may be best for groups composed of stealthers as there are some patrolling Battledroids that are hard to avoid. Operative/Scoundrel group stealth works great for this encounter. 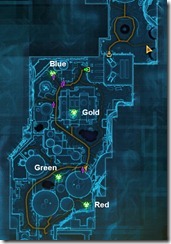 Each location have an unique combination of mobs 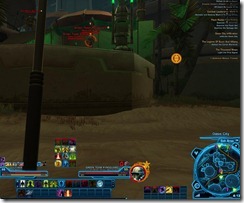 Oasis Enforcer Battledroids patrol the city. These guys are Champion level mobs with around 170k HP. If killed, these guys will respawn almost immediately so there is little sense in killing them. Avoid detection if possible but if you do aggro one of the battledroids, you can CC them and they will disappear once you engage the Operations Chief. Note that there are warzone health pick up things scattered around the map if you are low on health and don’t have a healer with you. 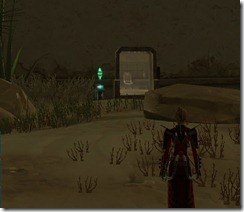 Once all 4 groups are in place, Kill the two NPC corresponding to each team and make your way to the Operations Chief up in the north. These NPCs cannoe be crowd controlled but can be stunned. 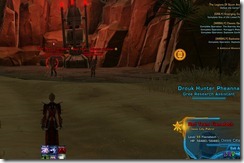 Classes like Operatives can go use their group stealth to help everyone get past Battledroids that are hard to avoid.

Operations Chief is a fairly straightforward boss but he does have some nasty tricks up his sleeve.

Terminate a 3 second cast with massive single target damage that will most likely one shot anyone not a tank. Make sure no one pulls aggro in the beginning or they risk getting one shotted by the boss. Tanks will need to use defensive cooldowns to survive through this attack if they are low on health.

This is an Explosive Probe he throws on the entire raid that explodes if the person with it takes damage or if the timer (25s) ticks down to 0. It deals around 7.5k damage but most of it can be absorbed by sorcerer/sage bubbles. This DoT can be removed by cleanse from operatives/scoundrels and mercenary/commando healers – removes tech damage.

A group of four Rail Turrets spawn around the room. These guys have around 19k HP and die fairly easily. 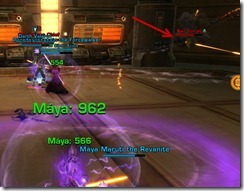 Operations Chief seems to have an aggro drop whenever he hunker down and knockback the tanks. 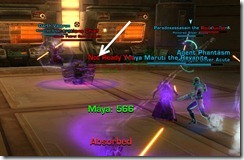 In hardmode, you have 6 minutes to get to the Operations Chief. The Mass Explosive Probe that Operations Chief deals around 10k damage and the various groups especially Blue deals a lot more damage but there are no other noticeable changes from storymode.

I found if you aggro the enforcer droids one thing you can do is to cc the droid. Once you get to and engage the last boss the droids will disappear.

Cool thanks for the tip. I added in 🙂

The main difference I noticed in HM is it is only 6m instead of 10. We where able to 1 shot it. The biggest problem with this encounter is having your raid team avoid the Battledroids. They have a lot of HP, take a long time to kill, and very fast respawn. It is easy to get in hurry mode and try to get through the map as fast as possible, but I promise taking your time and avoiding these droids is the best method.

I noticed that the explosive probe can be cleansed.

How did you take out the 2 hunters at blue. They seem to be destroying the DPS we send up there????

For one of the pairs (can’t recall if it is blue), you have to interrupt their attacks

Thank you for the reply. I think the green team is the one you interrupt. The Blue team does so knockback move that is uninterruptable that his for about 17k on out guardian dps. They also appear to get a buff when they are close together. Makes it very difficult for scoundrel healer to heal. (even when they are spread out). Going to try more attempts next week. Any advice would be greatly appreciated. Thanks again.

Another thing you can try is having tank + dps that can heal on the blue team. This way tank can take most of the dmg some heals from the dps. If tank dies just rez them

B-res from what I’ve seen seems count as a 3rd person attacking them thus triggering the alarm and a wipe. Someone went down, got rezzed and the alarm promptly went off.

For the Blue team it is relatively easy. They don’t hit hard until they start casting. (Don’t ask me what the name of it is, they just have the one cast) When they do, they will stand in a fixed position, have both people in the team move behind them and you will take no damage and no knockback making the fight incredibly easy. Make sure the dps grabs both hunters attention however as it can be tricky if they are both turned different directions.

Worked like a charm. Thanks man. This was very helpful.

how is your NiM progression?